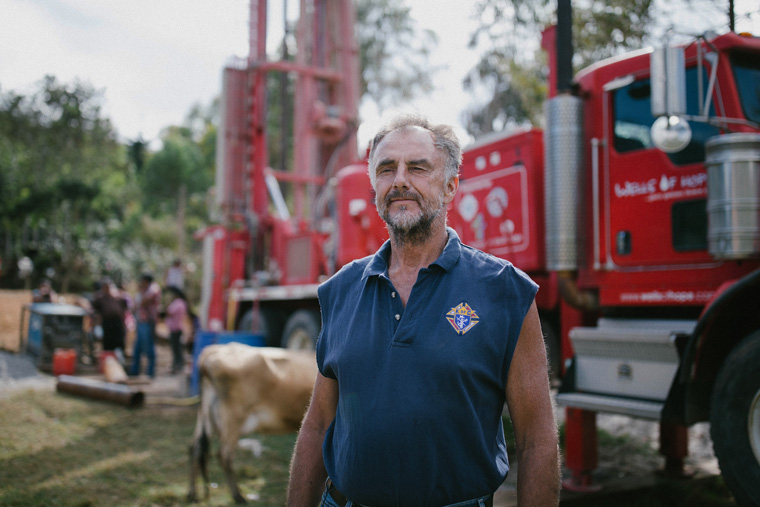 The only water available to the people in the mountain region of Santa Maria in Jalapa, Guatemala, was bacteria-infested.

Women and girls would spend as much as eight hours per day hauling the water for their families. They would walk an hour one way down a mountain slope, then trek back up carrying the water on their heads.

This was a daily routine for Susana.

“It wasn’t a clean river,” Susana said. “The pit had a lot of waste. Dogs would come by and drink the water. Whatever kind of animal came too. That water is very dirty. Very contaminated.”

If it’s not enough that drinking the water ran the risk of illness and disease, carrying the heavy water containers caused spinal issues for generations of women. But the bacteria-infested water seemed the villagers’ only option. They could only hope that the conditions would somehow improve.

That hope was fulfilled by Ted van der Zalm, a member of the Knights of Columbus St. Catharine’s Council 1394 in Ontario, who founded Wells of Hope with his wife, Miriam, in 2004 to bring clean water, education and basic health care to the poor.

The couple had a decade of experience drilling water in Africa and brought their knowledge to Guatemala after learning about the plight of residents in Santa Maria. At the time, they had four young children, three still in diapers.

“My wife and I were talking,” van der Zalm recalled. “We said, ‘Look, God has blessed us with a beautiful home. Maybe the home was not meant just for us. Let’s go to the bank with our home, get a loan against our home, we’ll buy a drilling rig.'”

The van der Zalms drove their rig from Ontario to Guatemala. Along the way, members of the Knights of Columbus and their families provided lodging, meals and gas money. When the van der Zalms arrived at their destination, they pitched tents and started drilling.

In the Knights’ Everyday Heroes video, van der Zalm demonstrates the process of drilling a well. By drilling a 12-inch hole, 960 feet down, the well produces more than 100 gallons of water a minute — more than enough to sustain three communities, with a tap at every household’s front door. Van der Zalm said this is life-changing.

The benefits of the well are numerous. Sickness has declined, the death rate has fallen and children are able to attend school more regularly. The availability of water also allows every household to have its own vegetable garden where people can grow their own food. They no longer rely on the rain, which previously was their only source of water for agriculture needs.
“If the rains were bad, the harvest was poor, you would get starvation,” van der Zalm said.

Wells of Hope also is building homes for those in the community. A local mother named Natalia came to Wells of Hope last year begging for help. Abandoned by her husband, she struggled to support her five children in their house made of dried corn stalks. When it rained, the inside of the house would become soaking wet. Wells of Hope is constructing a home for her.
Natalia’s story is not atypical for people in the area. Many women are left abandoned by their husbands or are widowed.

“She already came and said how grateful she is for the advancements we’ve made on the house and she says from now on we’ll be dry. From now on we can stay nice and warm at night time,” van der Zalm said.

Thanks to efforts like these, more than 50,000 residents in the communities of Santa Maria, Jalapa and Jutiapa have 14 new water wells, 19 newly constructed schools and dental care.

All of these projects, van der Zalm says, are a hand up, not a handout. This was especially evident when the community came together last year to create a new well. Van der Zalm did the drilling and pump installation while community members dug the trenches and installed the plumbing.

“The real heroes that humble me to the core, every single solitary day, is the poor that we serve. The sacrifices that so many women in the mountains make. They are true heroes in my book,” van der Zalm said.

Knights of Columbus in Canada and the United States have helped raise more than $1 million to purchase new drilling equipment for Wells of Hope.

Currently, Wells of Hope is finishing the first permanent medical facility in the mountains of Santa Maria Xalapan. It also will include a dental clinic staffed by Wells of Hope volunteers and personnel provided by the Guatemala Ministry of Health.

“We began Wells of Hope because we are all called to love our neighbor as our self. This power of love is so incredible that the seemingly impossible becomes possible,” van der Zalm said.