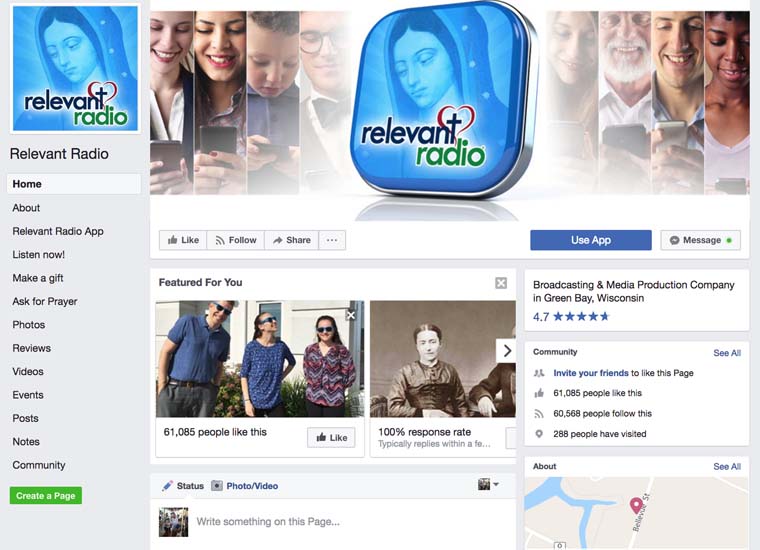 Twenty-one Brazilian-based Catholic Facebook pages, such as a Papa Francisco Brazil page, as well as four English sites, could not publish content July 18 due to Facebook silently taking down their sites. Millions of followers were affected, according to ChurchPOP, a Christian Culture brand website.

Catholic News Service contacted Facebook July 19 and received a response that it is looking into the situation of each of the pages whose sponsors reported had been shut down.

Among those with pages who were affected was the executive director of Relevant Radio, Father Francis J. Hoffman, affectionately known as “Father Rocky,” who has 3.95 million likes from Facebook fans around the world.

Relevant Radio reported that on July 17, all the page administrators of the Relevant Radio “Father Rocky” Facebook page found themselves unable to log onto Facebook. Once passing through a security measure, they found the Father Rocky page left “unpublished, with no other details or explanation.”

Father Rocky livestreams Mass daily from his Facebook page, as well as posts prayers, photos and even educational videos for his almost 4 million followers. Early July 19, Father Rocky posted a picture of a statue of Mary, stating, “Thanks be to God, I am back on Facebook!!”

“This serves as a wake-up call and we urge all Relevant Radio listeners and Facebook followers to download the free Relevant Radio App as a secure and reliable resource for the daily Mass and inspirational programs,” Father Rocky stated in a news release.

The Facebook page, Catholic and Proud, which has over 6 million followers, told CNS in a Facebook message that things appeared to be fine until the evening of July 17, when the page then became unpublished for the next day.

“The only notification I received was that we weren’t adhering to their policies, but that’s it, no reason, no example, absolutely nothing,” the Catholic and Proud page wrote to CNS. “That’s all we know. The inbox message reply here was also removed, so we couldn’t respond to anyone.”

In May 2016, Gizmodo, a design, technology, and politics website, published a piece accusing Facebook of censoring conservative trending topics, specifically the Conservative Political Action Conference and other conservative leaders. Their sources, former Facebook “news curators”, even admitted that stories that were covered by conservative outlets could not be trending unless mainstream sites covered similar topics.

In response, Facebook’s vice president of search, Tom Stocky, released a statement saying, “We take these reports extremely seriously, and have found no evidence that the anonymous allegations are true.”