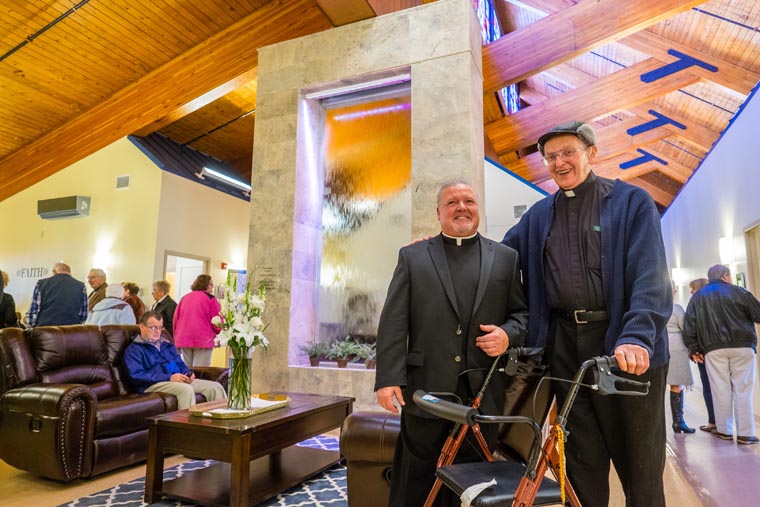 He served St. Casimir’s for more than three decades

Endicott — “He had the gift to touch an awful lot of hearts of guys,” said Father Jim Serowik, pastor of St. Anthony of Padua and St. Joseph churches. “They saw something in him that made priesthood very, very attractive.”

Father Serowik said he was one of at least a half-dozen priests in the Syracuse Diocese who found inspiration for their vocation from Father Matthew “Matt” S. Wieczorek.  Several had been his religion students in the years after his ordination. Two others, Father Joseph Zareski, pastor of St. Mary-St. Anthony Church in Cortland, and Father Serowik, were ordained during Father Matt’s first pastorate at St. Casimir Church in Endicott.

Father Matt died at the age of 86 on Oct. 7 at the Nottingham in Jamesville where he had lived since his retirement as pastor. Born in Dickson City, Pa., he grew up in Solvay, as a parishioner of Sacred Heart Parish in Syracuse. Father Matt graduated from the parish elementary school and Cathedral Academy. He studied for the priesthood at St. Mary’s College and SS Cyril & Methodius Seminary, both in Orchard Lake, Mich.

Following ordination in 1957, he became an associate at St. Casimir’s and religion teacher at Seton High School in Endicott. Two other associate assignments followed between 1965 and 1973: St. Margaret’s in Mattydale, and Holy Trinity in Utica. Father Matt then returned to St. Casimir’s for his first pastorate. He moved to St. Stanislaus in Binghamton in 1987. Then, after two years as pastor at Transfiguration in Rome from 1997 to 1999, he returned to St. Casimir’s where he was pastor until the church’s closing in June of 2013.

Father Serowik was the homilist at the Vigil Mass of Jesus Christ the High Priest on Thursday evening, Oct. 12.

In an interview before the Mass, he remembered advice Father Matt shared from his seminary teacher. “Jesus has to be the person who is the center of your priesthood and who you model yourself after. You become … another Christ,” Father Serowik said.

During high school, Father Serowik found it “cool” that his parish priest found time to take him golfing with him each week. He credits Father Matt for having him be an altar boy, a lector, and a Eucharistic minister to help nurture his vocation.

“He was a man who loved the Lord and he wasn’t afraid to share that relationship. He was enthusiastic about his priesthood. Even when I became a priest I would come and visit him on my days off. He always used to say, ‘Jim your priesthood is based on your personhood. God uses what you got to form you into the priest that you are,’” Father Serowik said.

In the late 1970s, Father Matt’s mother came to live with him at St. Casimir’s and served as housekeeper. As the 25th anniversary of his priesthood neared, she gave him an alb as a present. But she died before that anniversary.

Father Serowik noted that’s the same alb he was buried in last Monday.

Over the years, Father Matt had several dogs.  He could be seen walking Buster, Gizmo, and Harper next to St. Casimir’s. He kept Harper with him at the Nottingham after retirement, but the dog went to live elsewhere after Father’s illness last year meant a move to a different part of the complex.

Father Matt made a visit back to the St. Casimir’s building in February of 2016.  A nephew drove him to see the opening of Mercy House, where 10 rooms for the dying have replaced the church sanctuary.

On entering the former church, he smiled and said, “Got to see what my old house looks like.”

“St. Casimir’s had about 300 families and he had two vocations in six years when he was there. I think that speaks a lot to Father Matt … his personality … his fidelity.”

St. Casimir’s Parish native Father Zareski was homilist for the Mass of Christian Burial on Friday, Oct. 13. It was held at St. Anthony of Padua, just a couple of blocks from the former St. Casimir’s. Those who crowded into the church sang Polish hymns in honor of Father Matt.

“He embodied Christ. The words of Mass were central to him,” said Father Serowik.

“As he would say: ‘This is my body which is given up for you’; he did that for his people by the way he lived his life.”

Father Matt is predeceased by his parents; his sister, Mary Ann; two brothers, Joseph and Alfred; and his brother-in-law, Frederick Rogusz. He is survived by his sisters-in-law Marie (Alfred) and Arleita (Joseph), four nephews, and three nieces.

Deacon Tom Picciano is a journalist and longtime contributor to the Catholic Sun. He serves at St. Vincent de Paul Blessed Sacrament Parish in Vestal.