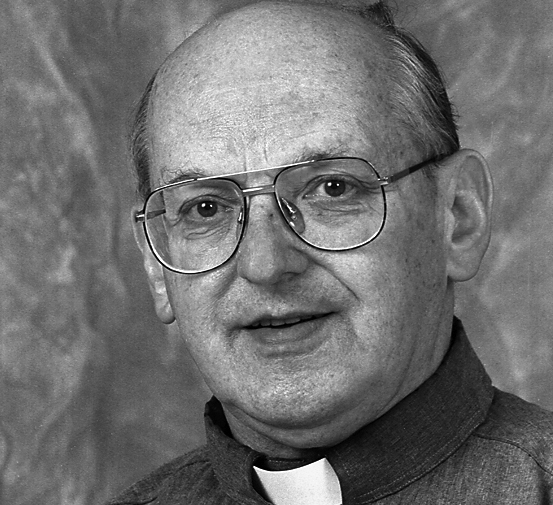 Rev. Matthew S. Wieczorek entered into eternal life and rest on Saturday afternoon, October 7, 2017. He was the third son of Stanley and Frances (Gorlewski) Wieczorek.

He was born on March 27, 1931, in Dickson City, Pa., and was baptized at St. Mary Visitation Church on Palm Sunday March 29. He attended Sacred Heart School in Syracuse and graduated from Cathedral Academy in Syracuse in June of 1949. He completed his college and philosophy courses at St. Mary’s College and his theological studies at SS. Cyril & Methodius Seminary in Orchard Lake, Mich. Father Matt was ordained to the priesthood by the Most Rev. Walter A. Foery at the Cathedral of The Immaculate Conception in Syracuse on May 18, 1957.

He celebrated his first solemn Mass at Sacred Heart Church in Syracuse on May 19. He served as associate pastor at St. Casimir’s Church in Endicott and taught religion courses at Endicott Seton Catholic High School from 1957 to 1965. He was spiritual moderator of the Catholic Adult League of Broome County. After three years at St. Margaret’s Church in Mattydale and five years at Holy Trinity Church in Utica, he was assigned as pastor of St. Casimir’s Church in Endicott in September of 1973. In May of 1987 he assumed the pastorate at St. Stanislaus Kostka Church in Binghamton. Father Matt served as pastor of Transfiguration Church in Rome, N.Y., from August 1997 to April 1999.

He returned as pastor of St. Casimir’s Church in Endicott in 1999. While at St. Casimir’s Church he was the chaplain of Court Bishop Foery 1502 of the Catholic Daughters of The Americas and of Sidona Caravan 212 of the Catholic Order of Alhambra. Father Matt retired as pastor of St. Casimir’s Church on June 30, 2013, and resided at the Nottingham in Jamesville. Father Matt was predeceased by his parents, Stanley in 1971 and Frances in 1982; his sister, Mary Ann Rogusz, in 1990; his brothers Joseph in 1993 and Alfred in 2013; and his brother-in-law Frederick Rogusz in 2015.

He is survived by his sisters-in-law Marie (Alfred) and Arleita (Joseph), four nephews, and three nieces.

Father Matt will be welcomed into St. Anthony of Padua Church, 306 Odell Ave., Endicott, on Thursday, October 12, at 4 p.m. Visiting hours will be on Thursday from 4:30 to 7 p.m. A Vigil Mass of Jesus Christ the High Priest will be celebrated at 7 p.m. A Mass of Christian Burial will be celebrated on Friday, October 13, 2017, at 11 a.m.at St. Anthony of Padua Church. Burial will take place on Monday, October 16, 2017, at 11 a.m. in Sacred Heart Cemetery, Geddes, N.Y. May Jesus Christ the Heavenly High Priest welcome his brother, servant. and priest Father Matt into his Heavenly Kingdom.