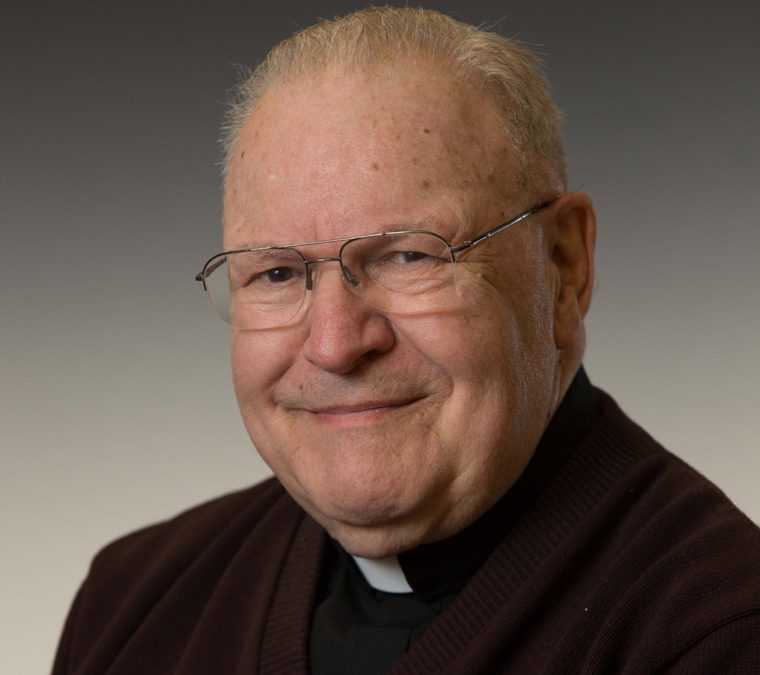 There was no shortage of former parishioners and students of Father John M. Quinn on Oct. 19-20 at St. Mark Church in Utica to offer anecdotes on the priest who Bishop Lucia said “held the  record for ‘Most Parishes Served as Administrator’” in the Diocese of Syracuse and lived in the minds of  some parishioners as “Father Magic.”

With Father Quinn’s widely known  reputation for using prestidigitation to open young minds to pastoral messages he was about to deliver in the Mass, it was little surprise that members of his local International Brotherhood of Magicians Ring 101 of Utica-Rome would attend.

They conducted a special ceremony before the Vigil, called “The Broken Wand,” signifying the passing of a member magician. Leon Etienne, who appeared on  the TV show “America’s Got Talent,” was a fellow member of Father Quinn’s in the  I.B.M. Utica.

Members of the Order of Carmelites Discalced (Secular) from Central New York, for whom Father Quinn served as spiritual director since joining in 1986, turned out in good numbers both days.

“When you leave this place here with the sadness you feel for the loss of our friend John,” he said, “I want you to have a little bit of peace and joy in your hearts because John is at perfect peace. You can share that peace and joy because that great promise of Jesus is that we are all going to see him again.”

Donna Adamo eulogized “Padre” (Father John’s family nickname) as tech-averse and fashion-averse. “Beneath the collar he was a humble simple man,” she said. “He duct-taped comfy shoes. … He wore the same winter coat, and the red scarf that his mother had knitted him, not for years, but for decades. The only jewelry I ever saw him wear was a crucifix … but he had thousands of books on Jesus, divinity, the Carmelites, Teresa of Avila, the Civil War and history. He built model planes, trains, cars and relationships. Near the end despite all his scriptural knowledge, he struggled as humans do, with the humility that old age and failing health bring. When the time came he was ready to go. It  was as peace-filled and as peaceful as it could be. Thank you, Jesus.”

Can a priest’s ordination be preordained or at least, predicted?

The late priest’s brother Gene Quinn confirmed the truth of the story that 12-year-old John Quinn, then of Syracuse, had built an altar in his bedroom with brotherly help.

“We attended St. Anthony’s in Syracuse in sixth grade and were both altar boys,” Gene said. “That’s when John asked me about building an altar in the bedroom. We used his dresser, found a box with a door in the front to use as a tabernacle. We found a pair of brass candle-holders someone had thrown in the trash … and asked our mother if we could light candles in them. She replied, ‘Only when I am at home.’

We had our own missals from church … Latin and English. … John would collar me and tell me that he’d say the Mass if I assisted. I was into other things, sports, etc., but I went along with it because he was my brother. He’d do the Mass once or twice a week, and got pretty good at it, even the motions.”

The groundwork was in place.

Father Quinn had many high-order skills including music (bandleader) and photography (teacher) as well as tour and pilgrimage conductor.

“Tour guide Quinn” received accolades on his sorties to Italy, Ireland, Washington, D.C., and France/England. Betty Carcone said, “Father Quinn was the world’s best tour guide!” Ellen Benton noted that he organized a two-planeload group of Utica Catholic Academy juniors for their 1972 class trip to Washington, D.C. Karen McBride’s experience on the Quinn-led Paris/London pilgrimage for the Discalced Carmelites in 1999 led her to comment, “Regardless of what or who we encountered, he  made us feel as though we were in good hands, allowing all of us on the pilgrimage to enjoy the experience worry-free.”

Nearly a dozen other friends of Father Quinn made uplifting comments about his scholarship, his depth of knowledge of Scripture and his putting others’ interests above his own.

Leslie Berry Dawson of St. Paul’s commented, “He made his sermons relate to people. They were always short and to the point. … Then he got on with the Mass and you got out before the kids started screaming.”

Gail Miller, who first encountered Father Quinn as a fellow teacher at Notre Dame High School, characterized him as “a true Renaissance man” with whom she played music at all Notre Dame High Masses.

Miller noted Father Quinn’s special caretaking of Notre Dame teacher and polio victim Sue Tranquille: “When a fire alarm or drill sounded, Father John made a beeline for Sue’s classroom and made sure that she got out of the building safely.”

Ginny (Virginia) Chromczak, whose family was a major moving force in the celebration of life and funeral for Father Quinn, said: “He was a man of prayers, and one of his greatest sacrifices was when he couldn’t say Mass any longer.” She continued, “He  would say, ‘When I go home to God, may he accuse me of being too generous with his mercy.’ He said that when he was forgiving sins it felt as though blood was dripping from his hands as Christ bled from his wounds. He was truly in tune with the mercy of God.”