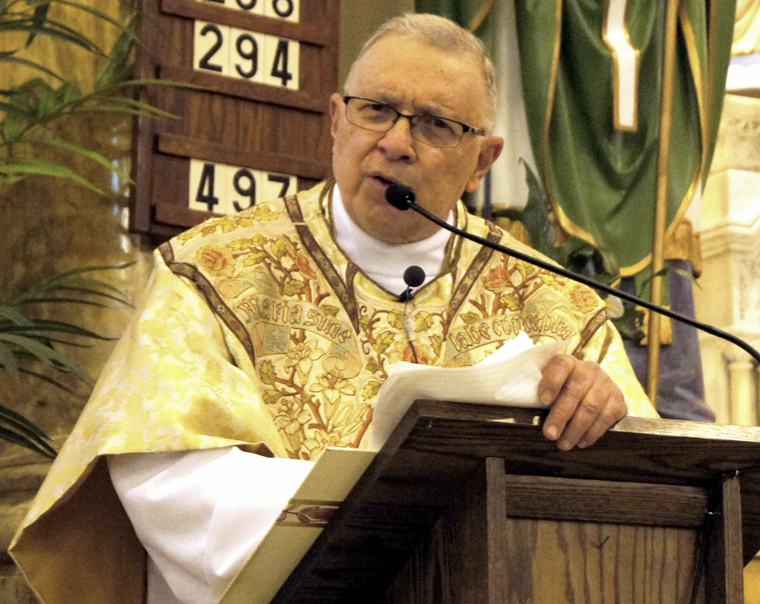 UTICA — The life of the late Father Richard E. Dellos, pastor of St. Joseph–St. Patrick Church, was celebrated there Aug. 15, coinciding with the Solemnity of the Assumption of the Blessed Virgin Mary.

Father Dellos, ordained to the priesthood May 18, 1968, fell victim to complications from COVID-19 on Aug. 11, 2020, at Lourdes Hospital in Binghamton.

Father Dellos assumed the pastoral duties at St. Joseph–St. Patrick in 2002, soon after completing a sabbatical in Italy. Among Father Dellos’ earlier assignments was another Utica parish, Blessed Sacrament, where he served from 1982 to 1989. That parish is now combined with St. Mary of Mount Carmel.

Karen McBride, a Blessed Sacrament parishioner during Father Dellos’ tenure who now attends St. Mary of Mount Carmel–Blessed Sacrament Church, said of her former associate pastor, “He was an innovator in many ways. He was the only priest I knew of who included verbatim papal messages” in the parish bulletins.

First, Parish Evangelism Coordinator Ellen Benton displayed a relic of St. Marianne Cope. Betty Frank contributed an image of “Our Lady of the Assumption,” and Sandra Maher placed an image of “The Divine Mercy” next to it. Between the two images, Deborah Sullivan placed Father Dellos’ hybrid golfing fairway iron, emblematic of his devotion to the game. Next, Richard Salamida presented a Boston Red Sox T-shirt with “Dellos #1” on the back. With mementos of Father Dellos’ religious devotions and his sports enthusiasms in place, only one earthly enjoyment remained to be represented.

When Barbara Sharpe set an unopened jar of Smucker’s peanut butter next to the rail-draped Red Sox shirt, all attending knew that the devotee of his parish’s sainted “Mother Marianne” (St. Marianne Cope) literally “fed his sheep” at his parish’s soup kitchen named for her.

Father Dellos also nurtured the celebrations of Divine Mercy Sunday and the Family Rosary Crusade; preserved and promoted the Perpetual Adoration Chapel established prior to his arrival; survived a lifetime of suffering heart-rending Red Sox failures on the diamond and remained a faithful fan; and displayed a passion for golf and for Georgia’s tastiest export.

Fiacco’s selections were “Priere a Notre Dame” by Boellmann and “Prelude in E Minor” by Johann Sebastian Bach.

The former pastor’s sister, Gloria Dellos Schafer, scheduled to eulogize her brother, was unable to attend.

In her absence, the mute eulogies provided by the Father Dellos mementos and the dozens of post-Mass exchanges of Father Dellos anecdotes between parishioners present and past, many of whom had not seen one another f