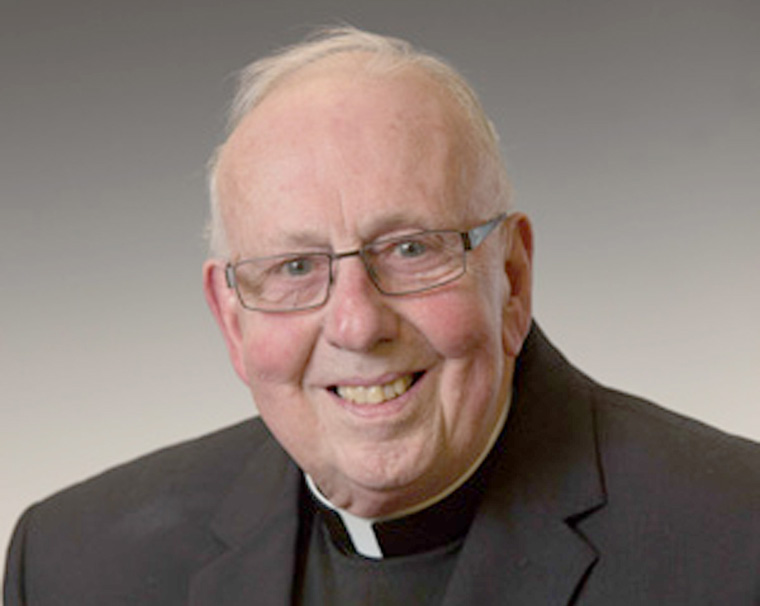 Though he officially retired as pastor of St. Joseph Church in Oriskany Falls in 2011, Father Vincent Kelly never stopped serving the faithful.

“Just this Sunday, he was able to celebrate Mass on Good Shepherd Sunday, which I thought was a fitting day for him to finish his work and go into the arms of the eternal Shepherd, who I’m sure will lead him to the everlasting Waters of Life,” said his nephew, Father Robert Kelly, pastor of St. Joseph in Lee Center and St. Paul in Rome, at the May 1 Mass of Christian Burial.

Father Vincent Kelly, a priest of the Diocese of Syracuse for more than 60 years, died April 26. He was 90 years old. Family, parishioners, and fellow clergy joined Bishop Douglas J. Lucia and retired Bishop Robert J. Cunningham at St. Mary’s Church in Clinton and via livestream for the funeral Mass.

Father Vin, as he was called by his family, was a people person, Father Kelly noted in his homily, whose “life and ministry centered around the people, his family, and the parishes that he was in.”

“I’m thinking about the time that Father Vin had for all of us as members of the extended Kelly family, and all the baptisms and weddings and funerals and other celebrations that he was with us for over the years,” Father Kelly said. “Grateful for all those special cherished memories that we have in family life and in sacramental moments.”

Family influences loomed large in Father Vin’s early years, Father Kelly said. His older brother was Msgr. William Kelly, a priest of the diocese who served for more than 60 years until his death in 2012; his mother’s cousin was also a priest, and the first bishop of Spokane, Washington, was a distant relative, he said. Father Kelly also cited the influence of Father Vin’s “very holy and good parents” and “the loving and caring environment of St. Francis de Sales School, and the priests and sisters who taught him over the years.”

A son of St. Francis de Sales Parish and Schools in Utica, young Vincent would set up an altar at home and “play priest,” making his sisters come in for “Mass,” he recalled in an 2017 interview with the Sun on the occasion of his 60th jubilee. He also enjoyed the privilege of serving as an altar server, something that helped his vocation, he noted then.

Father Kelly studied at St. Andrew’s and St. Bernard’s seminaries in Rochester and was ordained for the diocese Feb. 2, 1957. Over more than 60 years, his service included ministry at St. Patrick in Clayville, St. Paul in Oswego, St. Mary in Baldwinsville, St. Peter in Rome, St. Ann in Manlius, St. Theresa in New Berlin, St. Mary in Clinton, and St. Joseph in Oriskany Falls. Father Kelly also served on the diocese’s Priests’ Personnel Committee and as chaplain to the Rome Fire Department.

Father Jason Hage, who became pastor of St. Joseph in September 2020, spoke at the April 30 Vigil Service of the tremendous loss felt among parishioners at Father Kelly’s death. “He was one of our family members,” Father Hage said.

Father Kelly “truly stood in persona Christi,” Father Hage said. “He was a walking proof of the resurrection of Jesus…. His heart full of love, his heart filled with service, his desire to pour his life out for those he was called to serve.”

Father Kelly was a man of great insight, wisdom, wit, and humor, Father Hage said, and many lauded him as a wonderful confessor: “So many parishioners, from all four parishes in our PCA, have come forward this week and said, ‘Father, he’s the one that got me back to the Sacrament. Because of the way he approached the Sacrament of Reconciliation, he made me feel comfortable enough and safe enough to come home to the Lord.’”

Father Hage emphasized the authenticity of Father Kelly’s priestly heart and his devotion to the Sacraments and the celebration of the Eucharist. “He never left his post,” Father Hage said. “He never left this post to the very end. What a blessing for all of us that we could witness that kind of fidelity.”

Father Vin was also a chronicler of history, his nephew said. While serving at St. Mary’s Church in Clinton, he wrote a history of the parish titled “Never Left Unaided.” He also studied his family’s history, producing a family tree and even penning a poem about it. Father Vin was always there for the family, “always a gracious host and great to be with, and always filled with laughter and that classic smile that he had,” Father Kelly said.

He recalled his uncle as “a man of the Church and a man of God and a man for people.”

“We are grateful for the many years of priestly service and shepherding that Vin offered us in our families and in our parishes that he served,” he said.