Fifth Anniversary of the Election of Pope Benedict XVI 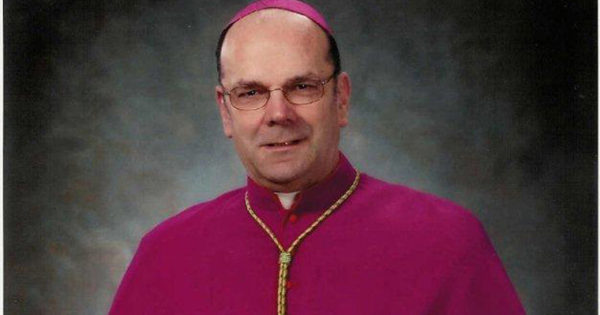 On Monday, April 19th, I was privileged to celebrate Mass in our Cathedral to commemorate the fifth anniversary of the election of Pope Benedict XVI. At the same time, I wrote to the Holy Father and assured him of the prayers and best wishes of all in the Diocese of Syracuse. Following is the homily which I preached on that occasion.

Some lessons learned fairly early in life stay with us and remind us who we are and who we are called to be. In recent days, occasioned by our Holy Father’s 83rd birthday on April 16th and the fifth anniversary of his election to the Chair of Peter on April 19th, I have thought about him and the role of the papacy in our lives. The pope of my youth, Pope Pius XII, seemed to be a larger-than-life figure in my grammar school mind. His picture was in our classroom and we were taught at an early age that he was the visible head of the Church. As a student at the preparatory seminary we were introduced into a custom which bears remembering today. It was our annual observance of Pope’s Day. Although the intervening years have made the specific observance of this special day somewhat hazy in my mind, the underlying meaning of the observance was to deepen the ties of affection that bound us to him and to his teaching authority. On my first retreat in the major seminary, the retreat master, Father John Baptist Pesce, spoke to us of the importance of reading and studying papal documents so that we would know the mind of the Church. His advice has stayed with me through the years. It has given me a deep appreciation for the rich explanation and teaching that has been passed on to us through the centuries from the mind and heart of the Supreme Pontiff.

Who is the Pope? First and foremost he is a follower of Christ who responded to God’s will for him much in the same way as Mary responded to the message from the Angel Gabriel. In accepting God’s will, he became the Vicar of Christ on earth, a sign and servant of the Universal Church. He is a man of prayer and a scholar. He is a master teacher. His statements appear daily in newspapers, magazines, on the internet and in blogs. His picture graces our Catholic institutions and his name is mentioned in every Mass celebrated anywhere in the world. He is known as the sovereign pontiff and a head of state. He is the first among Bishops, the Bishop of Rome and a universal pastor. He is a beloved “father” respected by believers and unbelievers. Most especially, if you meet Pope Benedict and his eyes meet yours, you experience the undivided attention of a true pastor’s heart and encounter holiness.

Today Pope Benedict emphasizes the continuity of the Church joining history and tradition with the needs of the modern world. He has been throughout the course of his life an articulate teacher of the faith. His writings, both before and after his election to the papacy, are rich theological reflections which show a generous pastoral heart. He clearly explains the teachings of our faith and responds to the needs of God’s people with a shepherd’s care.

In our first reading today from the Acts of the Apostles we heard about Stephen, “a man filled with faith and the Holy Spirit” (Ac. 6:5), a devout follower of Jesus who was persecuted for his faith. The charges against him were remarkably similar to the charges brought against Jesus thus identifying Stephen, the disciple, with the Master. The Gospel makes it clear that faith in the One sent by the Father, that is, faith in Jesus is essential for a true disciple. As a disciple, a follower of Christ, the Pope shares in Christ’s suffering.  And in the midst of turmoil and pain, disappointment and misunderstanding, he stands firm in his faith which in turn confirms our faith. In these difficult times our Holy Father challenges us to embrace the Church in all its beauty and with all its imperfections. Each of us personally and all of us collectively as God’s holy people must recognize the need for conversion and repentance.

On this, the anniversary of his election, I have written to the Holy Father, expressing my loyalty and loving obedience and assuring him of the esteem and loyalty of all in the Diocese of Syracuse. When you see the Holy Father on television or in the papers or if you are privileged to be in his presence his arms are usually opened and outstretched, his palms lifted upward as he greets the people and responds to their acclamations. As he does so, he is embracing all of us and at the same time lifting us heavenward in prayer.

Today I ask you to join your prayer to mine as we pray for him with the age old prayer of the Church: “May the Lord preserve him, give him a long life, make him blessed upon the earth, and may the Lord not hand him over to the power of his enemies.”
Most Rev. Robert J. Cunningham
Bishop of Syracuse