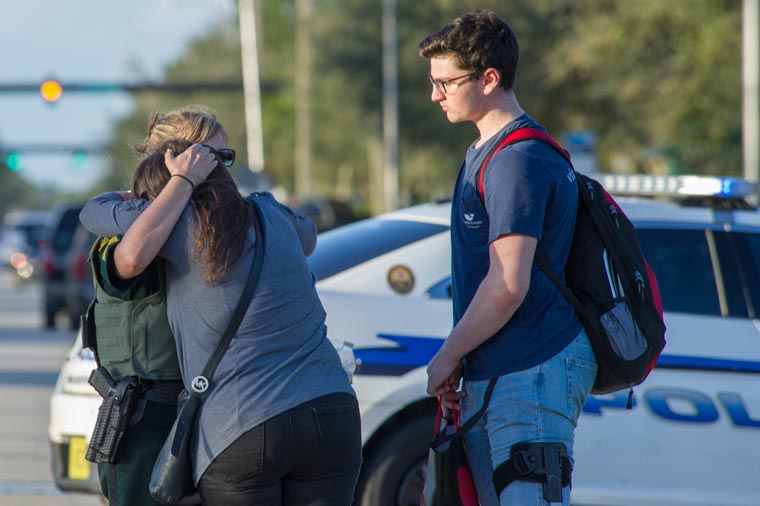 MIAMI (CNS) — Miami Archbishop Thomas G. Wenski urged community members to come together “to support one another in this time of grief” after a shooting rampage Feb. 14 at a Broward County high school left at least 17 people dead.

“With God’s help, we can remain strong and resolute to resist evil in all its manifestations,” the archbishop said in a statement. “May God heal the brokenhearted and comfort the sorrowing as we once again face as a nation another act of senseless violence and horrifying evil.”

In a late-night telegram to Archbishop Wenski, Pope Francis assured “all those affected by this devastating attack of his spiritual closeness.” “With the hope that such senseless acts of violence may cease,” he invoked “divine blessings of peace and strength” on the South Florida community.

Cardinal Daniel N. DiNardo of Galveston-Houston, president of the U.S. Conference of Catholic Bishops, called for prayer and healing. He urged all unite their “prayers and sacrifices for the healing and consolation” of those affected by the violence in South Florida and for a society “with fewer tragedies caused by senseless gun violence.”

Law enforcement officials identified the shooting suspect as 19-year-old Nikolas Cruz, who had been expelled for disciplinary reasons from the school where he opened fire — Marjory Stoneman Douglas High School in Parkland. On the afternoon of Feb. 14, Cruz allegedly went on the shooting rampage shortly before school was to let out for the day. He was apprehended about an hour after shots were reported at the school.

The suspect carried an AR-15 rifle and had “countless magazines,” Broward County Sheriff Scott Israel said. He also told reporters that of the 17 fatalities, “12 people died in the school, two were killed outside the school, one died on the street and another two died at the hospital.” Several others were transported to the hospital. Details about the shooter’s motive were still being pieced together.

Broward County Superintendent Robert Runcie called it “a horrific situation. It is a horrible day for us.” Florida Gov. Rick Scott said, “This is just absolutely pure evil.”

Pope Francis was “deeply saddened to learn of the tragic shooting,” Cardinal Pietro Parolin, Vatican secretary of state said in telegram he sent to Archbishop Wenski on behalf of the pope. “He prays that Almighty God may grant eternal rest to the dead and healing and consolation to the wounded and those who grieve.”

“We are deeply saddened by the shootings in Broward County, Florida, and by the needless and tragic loss of life,” Cardinal DiNardo said in his statement. “May the mercy of God comfort the grieving families and sustain the wounded in their healing.

“Catholics and many other Christians have begun the journey of Lent today,” he said. “I encourage us to unite our prayers and sacrifices for the healing and consolation of all those who have been affected by violence in these last weeks and for a conversion of heart, that our communities and nation will be marked by peace. I pray also for unity in seeking to build toward a society with fewer tragedies caused by senseless gun violence.”

Archbishop Wenski added in his statement: “This Ash Wednesday, we begin our Lenten Season that calls us to penance and conversion. With God’s help, we can remain strong and resolute to resist evil in all its manifestations.”