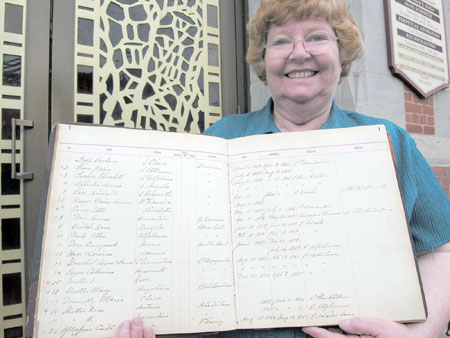 For 150 years, the Secular Franciscan Order has kept the spirit of St. Francis alive in Utica.

Katie Koscinski, SFO, the fraternity minister for the Secular Franciscan Order in Utica, said members of the fraternity — both men and women — encourage one another to live each day mindful of the teachings of St. Francis.

The order, formerly known as the Third Order of St. Francis, does not require its members to live in community, but rather to live their vocation with their families, in their jobs and in the world. They follow a Rule of Life which was confirmed by Pope Paul VI in 1978, and there are approximately 700 local fraternities with around 14,500 members in the U.S.

The organization celebrated in Utica on June 6 (see accompanying story).

“It’s a vocation that we strive to live the Gospel life truly, as Francis did,” Koscinski said.

The Secular Franciscan Order has a membership book dating back to 1859, with the first name being Barbara Bopp. Koscinski said some members like to think this is a misspelling of the name Barbara Cope, who would become Mother Marianne Cope, currently being considered for canonization. It’s a nice thought, Koscinski said, but there’s no real way of proving that since the name is written in someone else’s handwriting.

What can be proven, though, is that since that first member, 941 more names have been added over a century and a half of devotion to St. Francis. Koscinski said there are currently 28 members.

Koscinski said she became involved in the Order when she found herself searching for a deeper connection to her faith.

“There comes a time in our lives when we start to have questions as to whether we believe what our parents told us and we start to reach out and do our own search,” Koscinski said.

She started where many on similar journeys do — by going to Bible study groups. She would come home excited by what she had read and learned, but she didn’t feel quite right about bursting into the living room to announce her theological concepts and spiritual discernments. Although her family is practicing and devout, “they just weren’t on the same journey,” she said.

So Koscinski prayed to God to send her some like-minded people, and within a few months, she was approached by a member of the Secular Franciscan Order asking if she’d like to learn more about the group.

There are three stages to becoming a Secular Franciscan. The first is called Orientation, and during this time, those interested in learning more have an opportunity to talk with members and build relationships within the fraternity. It’s also a chance to learn more about St. Francis and St. Clare and join in prayer with the Secular Franciscans. During this period, which lasts at least three months, the person going through Orientation must discern whether they are being called to a Secular Franciscan vocation.

The second stage is called Inquiry, and it is the first formal stage of initiation. This is when a more in-depth period of study takes place to reach a fuller understanding about St. Francis, St. Clare, the Franciscan charism and Franciscan history. This stage lasts at least six months, and if a vocation is discerned, the person is then received into the Secular Franciscan Order.

The third stage is called Candidacy. During this last formal period of initiation, which lasts at least a year and a half, the candidate prepares for the lifelong commitment required by the Secular Franciscan Order. This period revolves in large part around a rule of the Order which emphasizes the importance of observing the Gospel by following St. Francis, who made Jesus the center of his life.

After completing these three stages, a permanent commitment is made and the member comes together with the Secular Franciscans to participate in continuing formation. “Formation never stops. We can never learn enough,” Koscinski said.

It’s a process that requires sincere discernment because it is a life-long vocation.

“This is a real promise that you make before God. It’s done through the liturgy, it’s done in front of the community,” Koscinski said.

The Utica group meets after 5:30 p.m. Mass on the third Sunday of every month at the parish center of St. Joseph’s/St. Patrick’s Church. “We try not to run it like a meeting — people go to meetings all week long, who wants to go to a meeting on a weekend,” Koscinski said.

They also meet on Wednesdays to help out at the Mother Marianne’s West Side Kitchen. “We try to treat people with dignity and love. They’re our brothers and sisters and we try to treat everyone who comes through that door like Christ,” she said. “You go home feeling full of peace and joy.”

Members are also encouraged to pursue different vocations such as becoming Eucharistic ministers, coordinating RCIA or religious formation and helping with fundraising for different community causes.

“We strive each and every day to better ourselves and to do what Jesus asked us to do, to love our brothers and sisters,” Koscinski said. “We love God and we try to live a good life.”