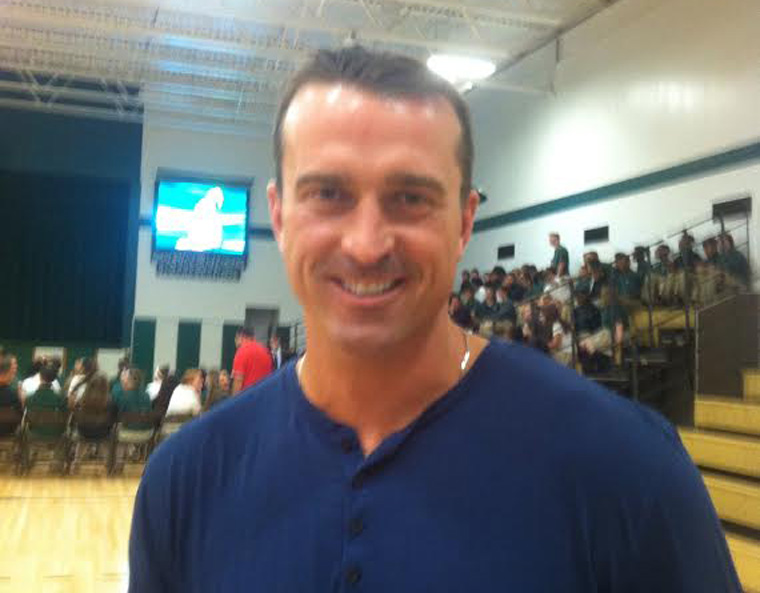 Chris Herren, 40, a former NBA basketball player for the Boston Celtics and the Denver Nuggets, spoke to the students at Bishop Ludden Jr./Sr. High School about his meteoric rise from a high school basketball player to being an NBA pick for the Boston Celtics, and his eventual abuse of drugs and alcohol that cut his career, and nearly his life, short.

The students at Bishop Ludden were silent Sept. 23 as they watched a riveting video chronicling Herron’s life through his years playing basketball at Durfee High School in Fall River, Mass., Boston College and then Fresno State, before failing a drug test in his junior year of college that landed him in a drug rehab program. After completing rehab, Herren returned to play ball for Fresno and went on to be drafted by the NBA’s Denver Nuggets in his senior year of college.

Herren played 70 games from 1999-2001 for the Nuggets and went on to live out a childhood dream of playing for the Boston Celtics. Despite his tremendous success on the court, Herren continued to abuse drugs and alcohol, which eventually led to his dismissal from the Celtics.

By 2006, Herron had seven drug-related felony arrests and had overdosed twice, coming within seconds of dying.

Faced with the loss of his freedom and his family, Herren reentered drug rehabilitation and has been alcohol and drug free since 2008. In 2009, he launched “Hoop Dreams with Chris Herren,” a basketball mentoring program for kids on and off the court. In May 2011, he co-wrote Basketball Junkie: A Memoir with Providence Journal columnist Bill Reynolds, and was featured in an ESPN Film documentary, Unguarded.

Following the release of both his book and the ESPN film, Herren began “The Herren Project” in 2011, a non-profit outreach and drug education program for young people across the country. Herren now regularly travels, speaking to over 250 schools and organizations across the country every year, sharing his personal story and educating at-risk students and individuals on how to deal with stress and have a healthier lifestyle without turning to drugs or alcohol.

“Every time I speak to a group I say a prayer to God,” stated Herren in an interview with the Sun at Bishop Ludden. “I pray at every talk that I can help just one kid. If I can spare just one person from going through what I did, then it’s worth sharing my story. I never want another set of parents to go through what my parents had to witness.”

Following Herren’s speech, students were encouraged to ask the former NBA player questions. One student asked, “Were you ashamed when you had to go to rehab?”

Herron nodded. “Everyone always wants to know what my worst day looked like. What was it like to be so addicted to drugs, so low that I pawned my jewelry, stood out on street corners before my pro games waiting for my dealer? The truth is, no one ever wants to know how I felt on that first day, the day I made the decision to try drugs. No one ever asks what prompted me to say ‘yes’ when two girls in my dorm asked if I wanted to snort cocaine. I wish I could go back to that day and say ‘no.’ I can only hope the stories that I tell young people like yourself will make them say ‘no’ on that first day when they’re offered drugs or alcohol.”

For more information on having Chris Herron speak at your school, visit theherrenproject.org or call (401) 243-8590.