From Poland with love 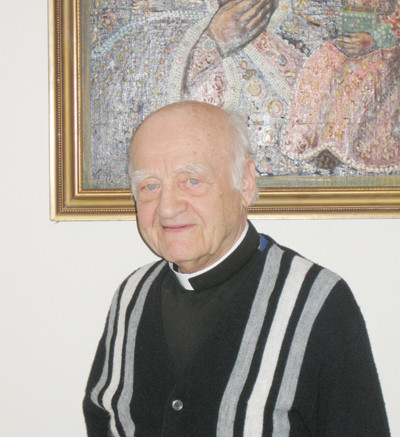 Father Stanley Dudkiewicz survived a communist takeover, a world war and his brother‘s imprisonment in Auschwitz.

He has spent the last several decades of his 85 years in the Syracuse Diocese, many of those years at the Basilica of the Sacred Heart in Syracuse’s west side Polish neighborhood. Father Dudkiewicz’s earlier years in Poland are never far from his thoughts, though. It isn’t easy to forget hiding from soldiers, studying for the priesthood in attics and basements or worrying about your older brother who was taken from your family when he was a young man. Nor is it easy to forget a faith so strong that it has sustained generations of people in Father Dudkiewicz’s homeland.

Father Dudkiewicz was born May 8, 1924 in the city of Kielce. His father was a fireman and died in the line of duty when Father Dudkiewicz was only two months old. That left his mother scraping for work to provide for her two young children. She took a job cooking and cleaning in the parish rectory. Their pastor was an invalid and after he was paralyzed by a stroke, young Stanley was strong enough to help the priest get around. In return, the pastor allowed the young family to live in the rectory. The next pastor paid for the young boy to live in the dormitory of what would be equivalent to a high school in the U.S. The kindness of the priests he knew was a strong influence on Father Dudkiewicz’s decision to study for the priesthood.

“The priests were very helpful when I was growing up,” Father Dudkiewicz said. “My mother was poor and the parish priests I knew were devoted. Maybe my vocation came from that.”

His brother was arrested for distributing a newspaper that contained information the Germans didn’t want published. He survived Auschwitz because he was young and strong, Father Dudkiewicz said. His brother eventually married and had three children who are still close to their uncle, Father Dudkiewicz, and visit sometimes from their homes in California and Michigan.

Like Pope John Paul II, Father Dudkiewicz studied for the priesthood underground. His seminary classes were held in various houses around the city. Father Dudkiewicz said during World War II the professors worked all day in factories and spent the nights teaching. Communists took control of Poland right after its liberation from Nazi Germany.

“It was illegal to study during the war,” Father Dudkiewicz said. “They hated intellectual people. They were always looking for professors and they would shoot them. Every day you went to a different location to study. I was finally ordained in Kielce in 1952.”

Father Dudkiewicz said that people today in the U.S., and some even in modern Poland, do not understand the history of the situation with the Germans and Russians. “We fight oppression by getting educated. We fight our enemies  that way,” he said. “You have to know we wanted to regain our freedom. We had to be ready to know how to manage our country, that’s why we studied. It was the same for John Paul II.”

A Syracuse neighbor, parishioner of the Basilica and friend of Father Dudkiewicz’s, Tadeusz Pawelek, said that the U.S. has never really lost its freedom. “You have many different nationalities living in this country so there’s not as much unity,” he explained. “It is very different — very different than Poland.”

One of Stalin’s attempts to “get even” Pawelek said, was the massacre at Katyn 70 years ago when the Russians killed thousands of Polish soldiers and intellectuals. It was that same massacre that Polish President Lech Kaczynski was planning to memorialize in a special ceremony when his plane crashed in what is now western Russia on April 10. Now the Polish people have a double tragedy to mourn.

Parishioners of the Basilica remember both tragedies with a special monument inside the church. Father Dudkiewicz was instrumental in putting the current display together. There is a black banner draped over a cross which reads “Czesc Ich Pamieci” which roughly translates to “Honor in their memories.” Faith, Father Dudkiewicz said, is the center of life for the Polish people.

“Even though the country was divided because of wars, despite this, the faith was the same,” Pawelek explained. “Faith is faith, it isn’t supposed to change.”

Pawelek drew parallels between the 70-year-old tragedy and the recent plane crash. He said intellectuals and high ranking officials were murdered by the Russians 70 years ago, and now the president of Poland and many high-ranking members of his administration are dead because they were on their way to pay tribute to those killed in Russia before them.  The irony of the situation is likely to weigh on the minds of many Polish people today.

Another revolution in the 1970s led to Father Dudkiewicz leaving Poland for good. He was in Detroit, Mich. on a retreat when his family told him he should stay and not return to his homeland. They told him it would not be safe for a priest in Poland. Father Dudkiewicz said he stayed in the Detroit Archdiocese hoping for a position at a parish. He expressed his frustration at not being utilized to his good friend from Poland, Msgr. Casimir Krzysiak, who was serving in Utica at Holy Trinity at the time. Msgr. Krzysiak, who was a roommate of Pope John Paul II during his seminary days, invited him to come to Utica and help at his parish. Father Dudkiewicz took him up on the offer. “I didn‘t even really have to study English because I used my Polish at the parish,” Father Dudkiewicz said.

Father Dudkiewicz moved to Syracuse to help Msgr. Adolf Kantor at Sacred Heart Church, before it was named a basilica. He has enjoyed his years at the parish and laments the decaying of the city neighborhood, saying the doors of the Basilica must be locked in the early afternoon nowadays. Although Father Dudkiewicz loves his ministry, he said he is still a Polish priest, not an American priest. He still has a green card.

Hearing confessions is one thing that keeps him very busy these days. Father Dudkiewicz said he has heard many, many confessions over the years at Sacred Heart.

“Everybody comes to me for confession because they think maybe I don’t understand their sin,” Father Dudkiewicz said with a chuckle. “I tell them, ‘You talk to God, not to me. I am only an instrument.’”

His understanding of English is pretty comprehensive, much to the surprise of his penitents. He is pretty spry for an 85 year old, but Father Dudkiewicz is not ready for another assignment at another parish any time soon.

“My next assignment,” Father Dudkiewicz said, “is heaven.”