From Poland with love

Father Lukasz Kozlowski ordained a priest of the Syracuse Diocese 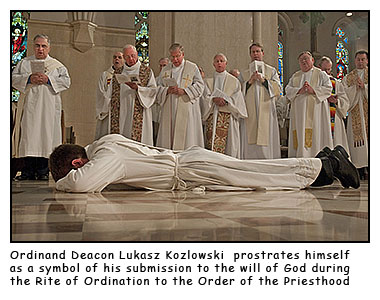 Father Lukasz Kozlowski was ordained a priest of the Syracuse Diocese on Saturday, June 6 at the Cathedral of the Immaculate Conception.

Although his was the lone ordination this year, Father Kozlowski represents a significant link in the legacy of the Syracuse Diocese. In 1996, Bishop James Moynihan visited Father Kozlowski’s native Poland in an 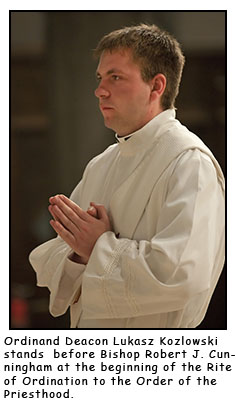 effort to gain priests and seminarians for the diocese. Stirred by the words and the plan of action the ninth bishop of the Syracuse Diocese had in mind, Father Kozlowski heeded the call. He was, in fact, the last to be ordained to the transitional diaconate by Bishop Moynihan. On the date of his ordination, Father Kozlowski also became the first priest of the Syracuse Diocese to be ordained by its 10th bishop, Bishop Robert Cunningham.

Approximately 50 priests and deacons participated in the ceremony, along with Bishops Cunningham, Moynihan and Thomas Costello.

Having been bishop of the Ogdensburg Diocese for five years, ordinations are not unique to Bishop Cunningham’s experience. Nevertheless, he acknowledged that each ordination is a testament to the health of a diocese.

Bishop Moynihan said he believes Father Kozlowski may be a precursor for many new priests. He added that he believes the church is on the cusp of a rebirth of enthusiasm for vocations.

“He’s going to be a model priest. He’s a young priest. It’s good to have young models and he’s going to be one of those young models. We’ve got several young priests from our own diocese who were born here. We’ve got several who are in the pipeline, who are on their way. We can’t wait ‘til we ordain them,” Bishop Moynihan said. “There’s a great renaissance that is happening as we speak.

Bishop Cunningham was installed as the 10th bishop of the Syracuse Diocese on Tuesday, May 26. For the bishop, the ordination constituted another celebration of his entrance into the diocese.

“I think it’s just a continuation of the celebration. It’s been a wonderful gift at the beginning of my life as the bishop of the Diocese of Syracuse to be able to ordain a priest of the diocese,” he said.

Father Kozlowski was born in Klobuck, Poland, and he graduated from St. Martin of Tours High School. He studied for two years in Czestochowa before he met Bishop Moynihan in 2002. Father Kozlowski said that the bishop’s presentation inspired him to serve in the Syracuse Diocese.

“His words about need and for the hunger for the word of God and the lack of priests and also the model of what the church in the United States looks like. It’s more personal. It’s kind of unique. It’s a little bit special,” Father Kozlowski said.

Father Kozlowski studied for the priesthood at St. Mary Seminary in Baltimore. 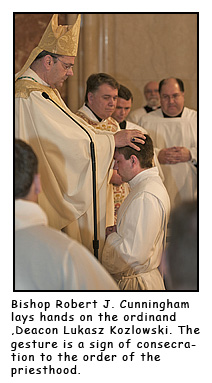 Bishop Cunningham agreed that the influx of Polish priests into the Syracuse Diocese is indicative of Bishop Moynihan’s lasting impact.

“I think that Lukasz, whose vocation was identified during Bishop Moynihan’s time, is definitely part of his legacy,” Bishop Cunningham said. “And he’s certainly reached out to many young men to consider the priesthood. We’re delighted that he’s invited these young people from Poland to serve the church here.”

During his homily, Bishop Cunningham stressed the Eucharist, the importance of the parish community in supporting the new priest and also the fact that Father Kozlowski was entering into a brotherhood of priests.

“He is not ordained in isolation,” the bishop said.

“May she be your patron through all the days of your priesthood,” Bishop Cunningham  said.

Following his ordination, Father Kozlowski was assigned the position of parochial vicar at St. Mary’s Church in Cortland, where he was assigned as a seminarian. The announcement was met with resounding applause from the attendees at the ordination, most of whom were parishioners of St. Mary’s and St. Anthony’s Churches in Cortland, which are in the process of merging.
Father Kozlowski was elated not only to finally have been ordained, but also that he was offered an opportunity to return to Cortland.

“I was waiting for this moment every day. It’s extremely satisfying to be part of the diocese and of course I’m extremely happy of my assignment, to be coming back to the people I know where I started my ministry during my pastoral year,” Father Kozlowski said, adding that he looks forward to working with the young people of Cortland in particular. “The people there are going through a difficult time with the merger or link. They have a school and I know I can be involved with young people and I know I can be a part of those two communities.”

St. Mary’s pastor Father Mark Kaminiski, who is also a native of Poland although he grew up in Germany, noted that he is confident Father Kozlowski will be an excellent priest. During the ordination, Father Kaminski served as the vesting chaplain at the request of Father Kozlowski. Msgr. Michael Minehan was originally to vest him, but he passed away recently.

“Well he’s a wonderful gift to the community first of all. He has had many, many experiences throughout the diocese,” Father Kaminski said. “He’s a delight to everyone. He brings great joy to everything he does – to every piece of his responsibilities.”

Father Kozlowski planned to celebrate his first Mass on Sunday, June 7 at St. Mary’s in Cortland.

Although he has only known Father Kozlowski briefly, Bishop Cunningham was confident that he will be an excellent priest and noted that the enthusiastic response from the parishioners of St. Mary’s and St. Anthony’s was evidence of his esteem in both parishes.

“I’ve only known him for several weeks now, but he’s a very young and dedicated priest. I think the enthusiasm that the people showed that he’s been serving at St. Mary’s is an indication of the high regard with which they hold him and I certainly hold him in the same regard,” Bishop Cunningham said.

Several members of Father Kozlowski’s family were able to make the trip from Poland to witness his ordination, including his parents, Jerzy and Grazyna Kozlowski. His cousin, Krsytyna Rozanska, participated in the liturgy, reading Isaiah 61:1-3 in Polish.

“We think he will make a very good priest,” she said, with the help of family friend Charles Bugnacki, who attends both the Cathedral and Sacred Heart Basilica, one of Syracuse’s traditional Polish parishes. “Obviously this is a very important [occasion] and there is a lot of emotion.”

Father Kozlowski was pleased that his family was able to come to Syracuse to witness his ordination.

“I couldn’t be more happy that they could come and see where I will be most likely for the rest of my life,” he said.