From Rome to Rome 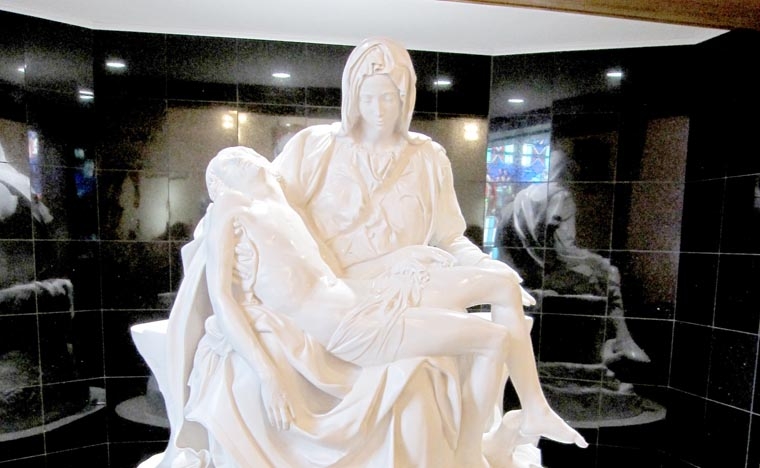 Sometimes hometowns and home parishes — the ones you grew up with and made your sacraments in — leave a mark on your soul.

Richard Stewart’s and Frank Schiro’s hometown of Rome, N.Y., has had this effect. In return, the two men, who reside on opposite coasts of the United States, each had a hand in bringing a Vatican-approved replica of Michelangelo’s Pieta to Central New York. The statue, at St. John the Baptist Church, is one of only four of its kind to have been placed to date.

Unveiled during and blessed immediately following Mass on April 26, the statue is an exact replica of the original, standing five feet, six inches tall and made of a proprietary Carrera marble blend.

It rests on a strong, two-foot high pedestal in a large nook constructed in loving memory of Schiro’s wife, Diane. After the blessing, Schiro met parishioners next to the space where a subtle plaque commemorates Diane’s life. Just on the opposite side of the wall behind him, he proposed to Diane 42 years ago in front of a statue of the Virgin Mary. It is, for Schiro, a special place.

It is hoped that the Pieta and space where it resides will resonate with others as well. “It is a beautiful sculpture that touches the faithful,” said Peter Newren, founder and president of Arte Divine. “It is profound to see it open people’s hearts and minds to God.” Arte Divine’s mission, in conjunction with the Vatican Observatory Foundation, is to bring the divinely inspired masterwork to 100 public locations around the globe.

A glossy, black tile backdrop contrasts with and reflects the silky, white marble that is faithful in every way to Michelangelo’s original. Mary cradles her crucified Son, while His hand drapes lifelessly. Even the minute details in His hands, where veins meet nail wounds, are clearly visible.

“If you were to imagine the most iconic image of Christianity, aside from Christ on the cross, it would be this,” said Newren. He said an experience that was once reserved only for travelers to the Basilica of St. Peter in Italy is now accessible to all. The experience is perhaps even better, he explained, “because the original is behind glass and far from visitors. You just can’t get close enough to see the artistry. Here, you can touch it, look at it from all different angles and appreciate the mastery of the sculpture.”

In his homily, St. John’s Pastor Father Paul Angelicchio recounted how Mother Teresa said the greatest thing you can do in the world is love your children: “When you look at the Pieta … and you gaze upon that image, you realize there is no greater love than that of a mother and her child.” He thanked the families responsible for bringing the treasured artwork to Central New York: the Stewart family for the gift of the rare piece itself and the Schiro family who provided “the beautiful tabernacle for that wonderful creation.”

Father Angelicchio introduced the parish to Richard and his wife, Esther Fresquez Stewart, who were instrumental in bringing this piece of sacred art to St. John’s. Richard left Rome with his family in 1961 when he began high school.

“I didn’t feel loved at home, although I’m sure I was,” he said. “But I remember being so loved by the priests and the beautiful sisters.” He recalled going to mow the old church’s lawn on the hill and cleaning out the fish pond where there were “beautiful colored carp.” It was on one of these occasions that the mother superior showed him a little packet that held, she said, a bit of the cross on which Christ was crucified. She told him that miracles happened to anyone who came into contact with it. “It didn’t matter that I was Italian and from Rome, N.Y.,” he said, marveling at the prospect of witnessing a miracle one day.

On another occasion, after the original church burned down, a priest told him that only two pieces survived the fire. One was a statue of the Sacred Heart. It was given to Stewart and it rests on his nightstand to this day. “It was blessed and I was blessed to have it,” he said turning to his wife of 48 years, “and I was blessed my whole life.”

He pointed to where the church’s confessionals had been and told the story of how he every day confessed the same sin of disobeying his father and mother. Finally, the priest commented on this and advised him to say 100 Our Fathers. At first, he mumbled and rushed his way through, but after a while he started to truly contemplate the words. “I thought, you know, maybe there’s something to this thing: ‘Give us this day our daily bread,’” he said. “I’m the CEO of a company with the resources to make things happen. It became my daily prayer. With it, you can rise up and see things and miracles can happen.”

In a prepared statement, Stewart said that he hoped the Pieta statues his family funded could be a “blessing for humanity” and that the artwork could serve as “beacons of love and forgiveness.” He added that his “natural choice, his first choice” was ensuring one was placed in his hometown. “From Rome, Italy, to Rome, New York, this is special for my family. My wife, my children and I are giving a gift back to this church like the one it gave me with the statue of Jesus.” He dedicated the statue in loving memory of his parents Richard G. Stewart and Josephine Gatto Stewart, to the parishioners of St. John the Baptist Church and to God.

When the gleaming white sculpture was unveiled, a hushed, “Oh,” could be heard, spreading in a wave across the crowded church. One brief, awed moment later, came respectful, but hearty, applause. It was a welcome for the beloved portrayal of Mary and Christ, and a homecoming for many.