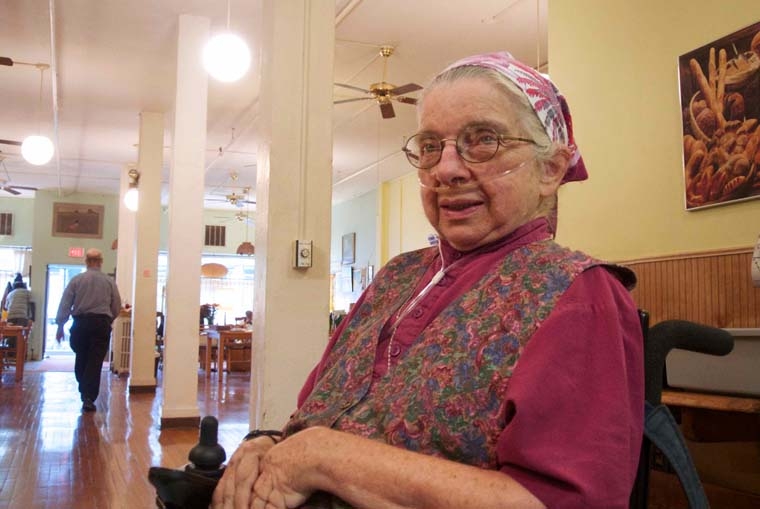 George Bartlett was among the first to arrive for Ann O’Connor’s funeral Mass Saturday, Jan. 24. Bartlett had never been to the Cathedral of the Immaculate Conception, and he didn’t want to be late to pay his respects to the longtime leader at Syracuse’s Unity Kitchen.

Bartlett said he helped with the Unity Kitchen newsletter and was a guest at the soup kitchen for about 15 years.

“Ann was a very important person,” he said. “She was very particular about things. She’s not going to take any exceptions, and that’s good. If she told me to do something, it’s like my mother telling me what to do. I miss her.”

O’Connor, 81, died Jan. 17 at her home. She was a native of Syracuse. She and her husband, Peter King, ran Unity Kitchen, a Catholic Worker community in Syracuse, since the 1970s.

Family, friends, volunteers and Kitchen guests filled the Cathedral for her funeral Mass. About 10 priests, including diocesan priests and Jesuits from Le Moyne, participated. Bartlett and five other Unity Kitchen guests carried the offertory gifts. In a reminder of her commitment to voluntary poverty, O’Connor chose a plain, pine coffin.

Father Vincent Hevern, a Jesuit priest who teaches psychology at Le Moyne College, opened his homily evoking the familiar image of O’Connor. She often sat, he noted, “by herself in her wheelchair. … Her gaze straight ahead … her straight hair in a bun, but probably covered with a kerchief. Her hands gnarled. Able only to move the control knob on the chair, but unable to turn even herself in that chair.”

But don’t assume that her physical limitations from severe juvenile rheumatoid arthritis made O’Connor weak, said Father Hevern, who celebrated Mass at Unity Kitchen for at least 20 years.

She “could fix you with those resolute eyes and speak directly — plain and simple — in ways that let you know that here was a woman as strong as steel,” he said.

Her strength and certitude, Father Hevern said, came from her absolute belief in the ideas of Matthew 6:25-34, the Gospel reading at her funeral. “Can any of you by worrying add a single moment to your life-span?” the reading says. “Seek first the kingdom (of God) and his righteousness, and all these things will be given you besides,” it continues. “Do not worry about tomorrow; tomorrow will take care of itself.”

King described his wife of 34 years as “a strange combination of physical limitations and inner strength.”  He praised her as “the bridge between the poor and the non-poor” and one who “honors the image of God in each person.”

In the early 1970s, O’Connor was drawn to the teachings of Dorothy Day and Peter Maurin, who founded the Catholic Worker Movement in 1933. The movement strove to “live in accordance with the justice and charity of Jesus Christ,” its followers say. Among its principles is hospitality for people on the margins of society. In Syracuse, this philosophy found expression in several ministries, including Unity Kitchen.

Unity Kitchen began as a traditional soup kitchen and overnight dorm. It operated in several locations, beginning with a storefront on South Salina Street. After a few years, O’Connor, King and the other volunteers were burned out and frustrated that their efforts seemed not to be improving the lives of their clients. After several years of discernment, the core community decided the best way to provide dignity was to offer “limited but lavish” hospitality. Guests were invited; rules were implemented; sit-down meals were served at beautifully set tables. Some social service providers, including other Catholic Workers, questioned UK’s shift, suggesting they would do more good by serving more people. In 1985, Unity Kitchen moved to its current location at 685 W. Onondaga St., Syracuse.

O’Connor studied often and prayed hard to understand her faith and her call to serve. She practiced an orthodox Catholicism that some found rigid, but for which she was unwavering and unapologetic. Her understanding of the Church’s teaching, for example, led Unity Kitchen in 1988 to refuse a $1,000 donation from employees of General Electric, then a major employer in the Syracuse area.

UK refused, it said, because GE built weapons, and because Catholic Workers practice pacifism. “It is an ancient Christian tradition not to accept alms tainted by oppression, deceit or blood,” UK said in a letter, according to local newspaper archives.

In a 1994 essay for New Oxford Review, O’Connor asked, “The Catholic Worker: Is it still Catholic?” Catholic Worker houses are divided over abortion, homosexuality and women’s role in the church, she wrote, and she criticized them for not adhering to church teaching on those issues.

“Radical feminists,” she wrote, “reject the teaching authority of the Church, especially in the areas of procreation and abortion, because the church is a ‘patriarchical hierarchy,’” she wrote.

O’Connor was consistent in her opposition to war and abortion and her concern for the marginalized, Father Hevern said.

“Ann’s hospitality formed one continuous panel across that seamless garment of life which Cardinal [Joseph] Bernardin urged us to weave as our ultimate Christian response to the world today,” he said.