Gabby and John are getting married: Mother of the Bride 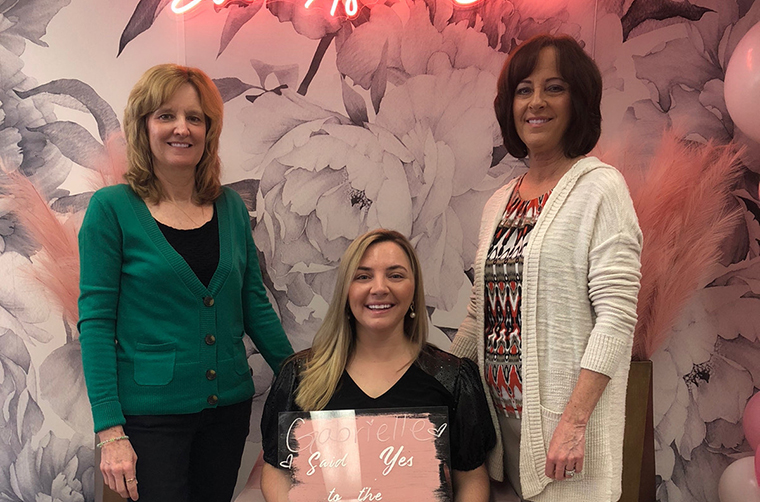 Moms always want the best for their children, and Melanie Gleason is a perfect example of that fact.

“I just want them to be happy,” proclaims Melanie, mother of four, including daughter Gabrielle Gleason, or Gabby as she is better known to those around her, and to readers of The Catholic Sun. We are following the Vestal native’s engagement to John Patwell and their preparations for a January 2023 wedding.

This is Melanie’s first mother-of-the-bride experience, but she has recently played the role of groom’s mom, as Gabby’s brother Robby was married in a Catholic ceremony in August 2021. Thus far, and though different, both experiences have been all Melanie could hope for.

“I don’t know if we are lucky or blessed,” Melanie laughs, sharing that she and her husband, Bob, are “both so happy about who they are settling down with. In the overall big picture, there is no difference there.” She adds that with Gabby, “we’re just getting into the planning so I don’t know if there will be a lot of difference. So far, it’s just been so positive in everything for son and daughter.”

One element in the positivity of the experiences is the importance of faith in raising their family, one with different faith heritages. “We were married in a Catholic ceremony, but my husband was raised Methodist.” Melanie always knew, though, that her children would be brought up in the same faith she grew up with.

“I feel like I have done the best with them that I could,” she says. As youngsters, attending church as a family was an important part of their upbringing. “Having four kids in the course of six or seven years, it took a lot to get them to church, to get them up and going.” Now, as adults and starting lives of their own, she knows that if she has done a “good job as a parent, they are going to find a good person.” Their faith will follow, she believes, and she keeps things fairly simple. “I want them to be happy,” she adds, and says that, as Gabby and her brother Robbie both planned Catholic church weddings, “there is a lot of happiness there for me.”

She describes faith as “the cornerstone that leads into everything else.”

Family faith traditions aside, what most excites the mother-of-the-bride about the upcoming nuptials?

“I’m most excited for Gabby and John. I think from the time she was little she wanted to someday get married and have kids.” Melanie adds that she, too, was the same way growing up. “Gabby’s very maternal. … She wants a house, a husband and children, so I am excited that it’s getting closer for her.”

Melanie says that as Gabby dated, she would ask her what she thought about the guys she went out with. “Nobody seemed to fit the bill. … She was one that knew, after the first few dates, that a person wasn’t her kind.” Melanie said, again, that she was the same way before she met her husband. But when “Gabby met John, it just seemed right away like a good match.”

Melanie takes a little bit of faithful ownership in this relationship between Gabby and John. About three years ago, Gabby was on a job search and also was hoping to meet someone she liked. “So, I started praying for her,” says Melanie, “and I’m not kidding, within one month, God one-upped me. She not only found a good job with the Diocese of Syracuse, in a few weeks she found John!”

With the wedding just over six months away, is there one hope Melanie has for the couple, or a token of advice she would give her daughter?

“A lot goes through your mind,” she exclaims. “I would tell her to stick to her true self, but she always does.” Melanie adds that she wants Gabby and John to know that “when the tough times come, lean on your faith. Ten times out of ten, God will get you through.”