George Floyd’s killing should move people to ‘reform how we live, change our attitudes, work for peace, stand up for justice’ 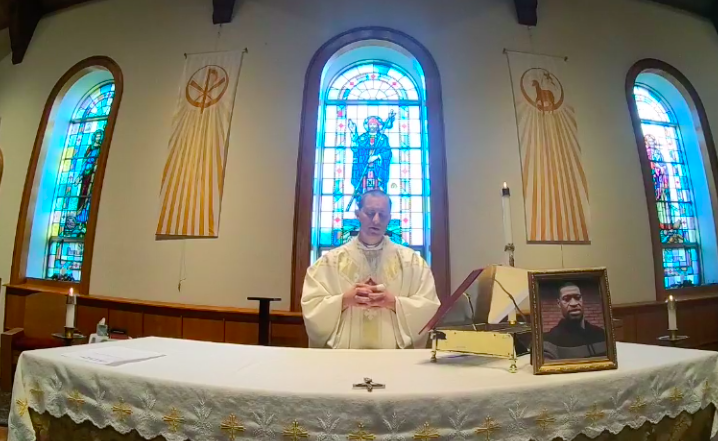 As George Floyd’s family mourned his killing and demonstrations called for an end to police brutality and racial inequality, one Syracuse pastor said Floyd’s death should spur change.

“We should be horrified by what happened to George Floyd,” Father Christopher Ballard, pastor of Our Lady of Hope, said during a livestreamed memorial Mass honoring Floyd June 6. “We can’t change that it happened, unfortunately. We can certainly reform how we live, change our attitudes, work for peace, stand up for justice so that it doesn’t happen again.”

Floyd, an unarmed black man, died May 25 in Minneapolis police custody. A widely viewed video showed Floyd, whose hands were cuffed behind him, call for help as a white officer pinned him to the ground with a knee to his neck for nearly nine minutes. “Please, please let me stand,” Floyd could be heard saying. “Please, I can’t breathe.”

The killing has spurred large protests in the United States and across the world, as people linked Floyd’s brutal killing to centuries of racism, violence, and inequality targeting black people. A public memorial June 6 for Floyd in Raeford, North Carolina, drew thousands, according to news accounts. A private family memorial was held the same day.

An estimated 2,000 people filled the streets around Syracuse’s City Hall Saturday afternoon for the “Fight Against Police Terror” rally, organized by the Syracuse chapter of Black Lives Matter in partnership with CuseYouthBLM and Raha Syracuse.

Father Fred Daley, pastor of All Saints Church in Syracuse, was among about 20 members of the parish community who attended.

“It was a very diverse crowd of people — young and old, all colors of the rainbow,” he said. From his vantage point about 15 feet from the speakers’ podium, the gathering was very orderly and peaceful, with “lots of mask-wearing,” bottles of water available, and attendees attempting to socially distance as possible.

Father Daley said his main impression of the gathering was “the deep, deep pain that people of color are experiencing in our nation at this moment…. Yet hope that this possibly could be one of those critical mass moments” that leads to “truly systemic change,” he said.

Father Daley said people need to channel the energy of this moment “in directions of change.” For white people, that includes recognizing “our ignorance around issues of racism,” he said.

“A lot of our understanding of history and life has to be unlearned. ‘To create a different world, we must learn how this one came to be,’” he said, quoting from a widely read National Catholic Reporter commentary on white privilege and racism by Father Bryan Massingale.

Syracuse Mayor Ben Walsh, a Catholic, walked with protesters June 4. He and two Syracuse police officers took a knee to support ending police brutality against people of color. “We don’t have to pick sides here, there’s just the right side,” Walsh said during a June 5 briefing. “Everyone just wants to make sure everyone is treated with dignity and respect.”

Walsh and Onondaga County Executive issued curfews May 29 as local peaceful protests grew chaotic and some set fires and damaged about 16 properties. No curfews were in place June 6 ahead of an event expected to draw up to 2,000. States of emergency remain in place through June 30, giving leaders authority to reimpose curfews.

The leaders reminded people the coronavirus still exists. “If you are going to be at mass gatherings, we ask that you wear a mask,” McMahon said June 5. “#Syracuse, continue to wear masks, wash hands and keep safe social distance in all you do #LetsTakeCareofEachOther,” the city tweeted.

More than 50 watched Our Lady of Hope’s memorial Mass live, and 372 people had viewed it by midday. A framed picture of Floyd stood on the altar during Mass.

The Gospel reading from the Book of John provides a lesson about Floyd’s death, Father Ballard said. “The hour has come for the Son of Man to be glorified,” the passage says. “Amen, amen, I say to you, unless a grain of wheat falls to the ground and dies, it remains just a grain of wheat; but if it dies, it produces much fruit” (Jn 12:23-24.).

“George Floyd’s hour came and it came too early by everyone’s standards and it should never have happened,” Father Ballard said. “The violence that was done to him should horrify us all. People that are sworn to protect our communities were the ones who perpetrated this. It makes it even more horrifying. The world has been horrified by it.”

“George Floyd’s death can bear fruit, just like any of the crosses in our life,” Father Ballard said. “We want good fruit to come from the death of George Floyd. We want the fruit of peace and justice. We want the fruit of people’s eyes opening to the struggles of so many people in our country and in our world. We want people’s eyes opening to injustice and racism, bias and prejudice.”

Msgr. Neal Quartier, rector of Syracuse’s Cathedral of the Immaculate Conception, addressed local demonstrations and condemned racism in a June 1 video that addressed the meaning of Trinity Sunday, observed this weekend.

“The Trinity of God is a trinity of persons, a community of persons,” he said. “If ever we needed relationships, we need them now. We cannot go it alone. We are interconnected. We rely on each other. … At this time in history, the Trinity is a model of us to see ourselves as brothers and sisters no matter what race, creed, or orientation.”

Msgr. Quartier quoted the late civil rights leader Martin Luther King Jr. “A riot is the language of the unheard,” King said a March 14, 1968, speech delivered a few weeks before he was assassinated.

Diversity and unity give glory to God, but “for so many, diversity is a source of fear, suspicion, hatred,” he said. “How very devastating to the community is the unreasonable demand for uniformity.”

Racism “is against everything that Jesus taught,” he said. “Trinity demands that we listen to each other, we hear the cry of the oppressed. This is how we will end violence and root out racism.”

Pope Francis addressed Floyd’s killing and the protests it spurred during his weekly audience June 3. “We cannot tolerate or turn a blind eye to racism and exclusion in any form and yet claim to defend the sacredness of every human life,” he said.

The pope prayed “for the repose of the soul of George Floyd and of all those others who have lost their lives as a result of the sin of racism.”