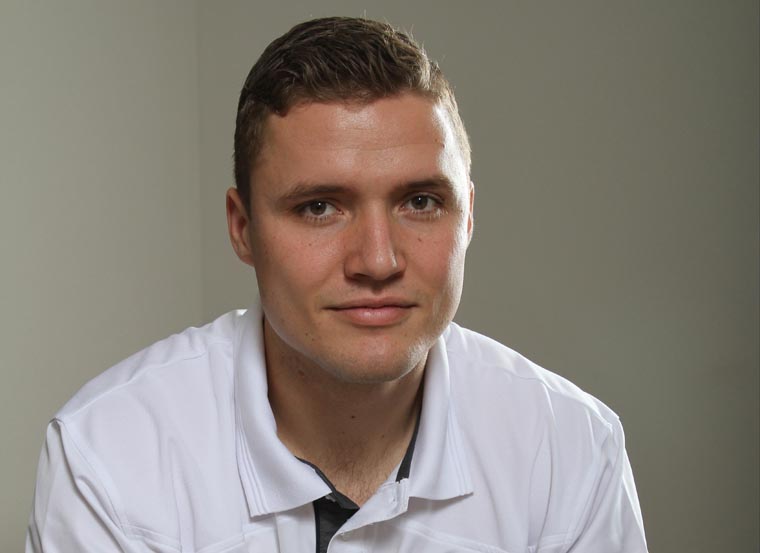 In recovering from a life-threatening injury, walking on to the Georgia Tech football team as a punter, and discerning the priesthood, Aasen has demonstrated a desire to succeed.

Aasen, who graduated from Georgia Tech with a degree in industrial engineering in May, gave up his final year of football eligibility for the seminary. He planned to enter Notre Dame Seminary in New Orleans this fall to begin studying for the priesthood.

Football has been part of Aasen’s life since second grade. The youngest son of Mark and Tina Aasen of Fayetteville, Georgia, he grew up a parishioner of Holy Trinity Church in Peachtree City. Aasen, 22, never thought of being a priest as a child.

“It was really just never part of the conversation,” he said, explaining that his concentration was on sports and school and “figuring out those natural next steps that every kid my age is supposed to take.”

An injury as a sophomore at Starr’s Mill High School and later involvement in the Georgia Tech Catholic Center helped him focus on spirituality.

During practice in October 2010, the junior varsity running back was going through drills with varsity players. Aasen got a handoff and a player, nicknamed the Nigerian Nightmare, tackled him. Ufomba Kamalu, who now plays for the Houston Texans, weighed 120 pounds more than Aasen.

“When I hit the ground, my head whiplashed off the ground, which caused a pretty bad concussion,” he said. The trainers checked him. He sat out of the rest of practice and a friend drove him home.

Aasen was tired the next day but competed in that evening’s game at Northgate High School in Newnan. Northgate is next to a fire station, which was providential.

With more than a minute left in the game, Aasen went to the sidelines and took off his helmet. He started to remove his shoulder pads, passed out and had a seizure. Paramedics based at the fire station arrived quickly. He was taken to the hospital, where doctors determined he had a subdural hematoma, bleeding on the brain. Aasen underwent a craniotomy to relieve pressure on his brain.

The community supported the family with prayer and visits. Aasen credits the prayers for his almost unheard of recovery. He was carrying on conversations within a couple of days and feeling well in a week.

Many people said the recovery was a miracle, but it wasn’t until his pastor asked a question that he pondered it as more than a “crazy outcome.”

“I do remember Father John Murphy, the priest at Holy Trinity,” Aasen said. “He came up to me after Mass once. He said, ‘How does it feel to be a miracle?’”

That’s when it occurred to the young man; there was something greater at work.

Post-injury, Aasen had double vision for a time and needed physical rehabilitation. A scar on the left side of his head is a clue to his traumatic injury. He also decided to learn kicking and punting so he could still be involved in football.

In fall 2013, he was off to Georgia Tech, joining his brother Davis, who introduced him to the campus Catholic Center, where priests and students helped him to dig more deeply into the faith.

“My parents and I, we would always go to Mass on Sundays, but I didn’t quite understand what was going on,” he admitted.

He credited Father Joshua Allen, chaplain, and other priests who served at the center with being teachers.

“The Catholic Center is where I’ve learned everything, for the most part, and observed … what good Catholics, really solid, practicing Catholics look like,” Aasen said.

Father Allen stressed that a student’s first week on campus usually determines his or her college lifestyle.

“So we really try to grab all the Catholic students right away and get them plugged into Mass at the Catholic Center and growing those relationships, which luckily for me my brother did for me without me knowing it,” Aasen said.

Wanting to play football helped keep Aasen on a straight path. As a punter, he got a late start. Most college punters have been kicking for years and have played soccer, which helps.

It took several tryouts before he made the team in the fall of his second year on campus. He often carried a bag of footballs as he crisscrossed campus, worked out on the track and grass fields and in his dorm room.

Aasen has enjoyed playing the game and holds great memories of his time on the field. He said he will miss the friendships with teammates and relationships with coaches most of all.

During his discernment, he bounced questions off Father Allen and later visited Notre Dame Seminary with his father.

“It just felt right. I’m going to find the same fraternal aspect that I found on the team in seminary. It’s just going to look a little different,” he said.

It was difficult for Aasen to tell Paul Johnson, Georgia Tech’s head coach, that he would be pursuing a different calling.

Johnson said he supported Aasen and believes his former player will be successful.

“I’m certainly not going to get into a contest with a higher being as to what your calling might be,” he said.

The center also has a tradition of priestly vocations. Some 30 priests are graduates, with 15 serving in the Archdiocese of Atlanta. There are 14 alumni in formation for the priesthood or religious life. More than 25 men and women attended a discernment retreat in February.

Aasen said it has been inspiring to be around other young people at the center, who all have so much going on in their lives.