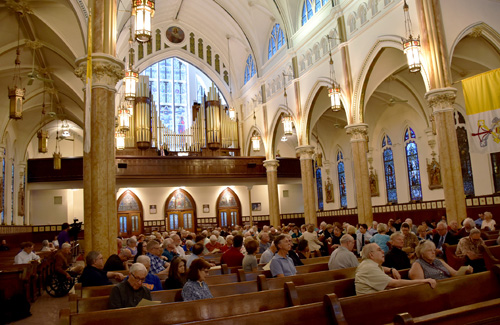 The audience was awestruck and the light pendants swayed from the shock wave.

“You can tell how powerful the organ is when the chandeliers still swing” 15 or 20 minutes after the concert ends, said basilica Music Director Frank Schultz. “That one over there’s going a little bit too.” 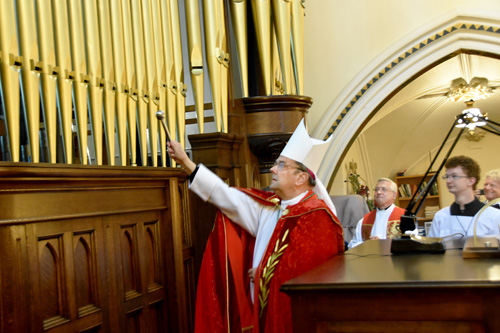 Schultz noted the vibrations at the June 9 Blessing and Dedicatory Concert for the shiny restored 1927 Skinner Organ Company Opus 669 pipe organ at the Basilica of the Sacred Heart of Jesus in Syracuse.

“It was nice to hear it again,” said Schultz, who heard it played at his wedding on Oct. 3, 1992. The organist then was Paul Burgay, who is a former organist at Most Holy Rosary Church in Syracuse.

Of course, Schultz had something to do with the vibrating basilica too; the June 9 audience of about 250 people sang along as he sat at the Skinner and played the hymn “Joyful, Joyful, We Adore Thee.”

The basilica’s rector, Father Andrew Baranski, noted the “providential” aspects of the Skinner. For 75 years, the basilica housed another classic pipe organ, M.P. Moller Opus 1093, which had 1,700 pipes and was worn out.

Meanwhile, the Skinner, which boasts 2,431 pipes, was sitting unused in a former church building on the east side of Syracuse. Father Baranski said Kerner and Merchant Pipe Organ Builders, of East Syracuse, had the Skinner on their radar.

“By God’s grace, we found the Skinner” without an exhaustive search for a replacement organ, Father Baranski said.

He added: “We went in, we talked, and they donated the organ, actually, to us. So all we had to do was pay for taking it down, apart, cataloging it, restoring it, rebuilding, and putting it back together.”

That cost hundreds of thousands of dollars, and the basilica is still accepting donations (see box) for the financial obligations.

The dedicatory concert followed the inaugural recital for the refurbished Skinner: June 7, with organist Todd Wilson, from Cleveland, Ohio.

“It’s a totally satisfactory end to over fifteen months of hard work!” wrote Kerner and Merchant in the program for the inaugural recital.

The company refinished and modified the old Moller organ’s case and pipe façade so that the audience looks up and sees golden pipes (non-functioning) and gleaming wood; the Skinner’s working pipes (“carefully and lovingly refurbished”), made of wood and a gray metal alloy, sit behind the majestic façade.

Other work included electrical modifications, restoration of the console, balcony preparation, painting, and floor work. The blower motor and fan, which are housed in the west tower of the basilica, were sent to Auburn Armature for refurbishment.

The project went on for two and a half years; installation of the Skinner in the basilica began in November 2018. 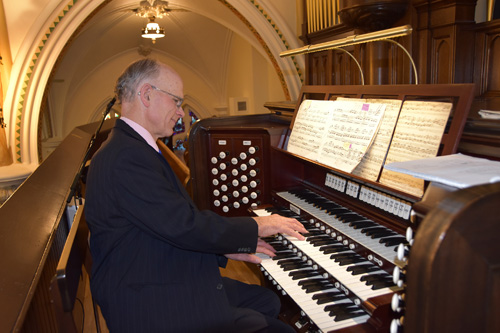 Organist Todd Wilson, from Cleveland, Ohio, is shown June 7 at the basilica just before his performance in the Inaugural Recital on the restored Skinner organ.

The Skinner had not been displayed prominently in its former home, where the acoustics could not match the basilica’s.

“How wonderful that the instrument has a new home, in a splendid location, sounding better than ever!” Kerner and Merchant wrote.

Bishop Robert J. Cunningham went up into the choir loft to bless the organ on June 9. “Much of our greatest musical heritage renders praise to God and Christ,” he said. He noted that his favorite sacred works include Johann Sebastian Bach’s St. Matthew Passion and Handel’s Messiah.

The bishop quoted Psalm 150, which says: “Praise God in his holy sanctuary. … Give praise with blasts upon the horn, praise him with harp and lyre.”

The Bach pieces immediately showed the versatility of the Skinner: tunes featuring playfulness, delicacy, prettiness, and rumbling, and a fascinating interplay of sizzle and doom. The Fantasia and Fugue in G Minor suggested sound spiraling past the basilica’s west tower and into Sunday’s blue sky. Schultz noted that in the old days, he would open the stained glass windows and release the organ sounds into the neighborhood, but now the windows are permanently shut for temperature control.

Dr. Wojtasiewicz continued with Four Pieces from the Music of Old Cracow. One of them, rich and stately, seemed appropriate for someone being knighted in a castle; another opened blazingly fast; Old Cracow must have been pretty lively.

He continued with Durufle’s Variations on Veni Creator, which includes a whirlwind of sound as the contemplative mood crosses over into a sort of bedlam.

Told that the light pendants seemed to be moving by angels’ breath after his performance, Dr. Wojtasiewicz said, “That’s marvelous.”

Wilson is the head of the Organ Department at The Cleveland Institute of Music; he is also Director of Music at Trinity Episcopal Cathedral in Cleveland, Ohio, and Curator of the E.M. Skinner pipe organ at Severance Hall (home of The Cleveland Orchestra).

The audience, which Schultz estimated at 300, appeared to be meditating during Wilson’s opener: Antonio Vivaldi’s Concerto in D minor, BWV 596, arranged by Johann Sebastian Bach. Attendees closed their eyes and swayed, as if they could see themselves playing it too.

“He really showed off the organ’s celesta in Londonderry Air,” said Andrew Siuta, organist, liturgical coordinator, and music director at St. Joseph–St. Patrick Church in Utica. “It left me wanting to hear more of that stop, but I guess that’s the trick of using a unique sound — don’t overdo it.”

Wilson closed the first part of his program with Cesar Franck’s Choral in E Major. Wilson noted that Franck wrote “one masterpiece after another in the last decade that he was alive,” and he added that the Choral “comes out quite gloriously in the end.”

“I appreciated the inclusion of the Franck Choral,” Siuta said. “I like Franck, he’s one of my favorite composers, but I realize his writing is a bit like that of Brahms — pretty refined, not fully appreciated on first exposure, but having something significant to say to the earnest listener.”

Interviewed at intermission, Bill Steves, past president and current member of the I.J. Paderewski Choir at the basilica, said, “It’s awe-inspiring just to look up there [and] you see our beautiful stained glass window all lit up behind.”

“Somebody that caliber?” he said of Wilson. “We’re very fortunate to have him here.”

The penultimate tune, Marcel Dupre’s Variations on a Noel, Op. 20, Wilson said, was written on Dupre’s first trip to the United States in the 1920s.

“He played his way across the country from the East Coast to the West Coast, and back again,” Wilson said.

Dupre’s Variations was the favorite part of Wilson’s recital in Siuta’s opinion.

Wilson’s finale was his improvisation on a theme submitted by Father Baranski: O Makalapua, by Queen Lilluokalani. The queen was the last sovereign ruler of the Hawaiian Kingdom, according to the National Park Service website.

“I first heard O Makalapua in 2006 at our cathedral,” Siuta said. “The Sisters of Saint Francis sang it in Hawaiian as the body of St. Marianne was wheeled down the aisle on the eve of her first feast day. Then it was accompanied by guitar. It sounded much different on organ.”

Asked about making up music on the spot, he said: “I’ve always been interested in improvising and I’ve done it for a long time, and like anything else it’s a skill that you can grow, I think.”

He does it by looking for “the building blocks in the theme, the intervals of the repeated notes or the rhythm or something you can latch onto and develop a little bit in an improvisation.”

He added: “I liked the nature of the Hawaiian theme, and then it was fun to put it together with the Veni Creator, the plainsong for the Pentecost Mass. … So, two very contrasting themes but they seemed to work pretty happily together, so that was a nice little mix.”

“I thought he did a marvelous job showing off the organ,” Benjamin Merchant, president of Kerner and Merchant, said of Wilson’s performance. “The organ has so many colors and combinations and effects, and Todd really understands how to use this organ. He plays a Skinner like this for [The Cleveland Orchestra].

“And so he did a wonderful job showing off the organ. It’s nice to hear an old instrument like this sing again.”

Wilson chatted after the recital with Stephen Best, minister of music at Utica’s First Presbyterian Church and lecturer in music at Hamilton College, and Best’s student Dominic Fiacco, a 14-year-old church organist who lives in the village of Poland in Herkimer County. 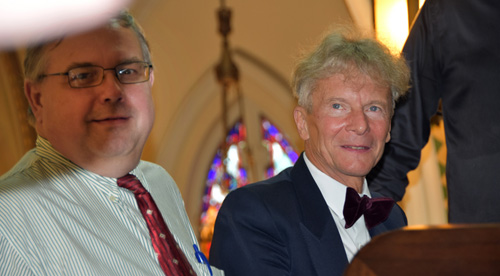 Music Minister Best said of Wilson: “He certainly used the organ to maximum advantage and showed us a different way of exploring all these sounds — absolutely incredible. So what this church has done is every bit as incredible as everybody says.”

“I really liked his playing,” Dominic said of Wilson, “and I noticed that he didn’t play just a bunch of flashy pieces; he played some really meditative stuff that showed off the warmth and beauty of the organ a lot.

“And his improvisation was very nice; when I heard him play the theme, I was wondering how he could make it good, because it sounded sort of weird almost, but he did a good job with it.”

Wilson, the improvisational master, is also intuitive. He drew laughs and applause with this line:

“I had the opportunity a number of years ago to play this organ in its original home, and I have to say, it’s a lot happier here.”

“The organ sang its own praises,” Siuta said. “I can’t imagine an organist or a congregation not looking forward to hearing from it. A solid but gentle presence that never screamed, with some very nice reed stops, capable of coaxing praise out of all gathered.”

Music Director Schultz said his late grandmother Marion Jachim grew up in Sacred Heart Parish and told him about Maryan S. Tanski, the parish’s organist for about 40 years, from the early 1900s to 1944.

Grandmother Marion told Schultz: “You walk out of here saying, ‘Wow.’ You know you’ve been to church.”

So after the weekend of inaugural and dedicatory concerts for the Skinner, he told master organists Wilson and Dr. Wojtasiewicz:

“She’d be proud of the way you guys played that organ.”

Organist Todd Wilson, from Cleveland, Ohio, is shown June 7 at the basilica just before his performance in the Inaugural Recital on the restored Skinner organ.

BASILICA  ORGAN  PROJECT
The Basilica of the Sacred Heart of Jesus’ 1910 M.P. Moller Pipe Organ has been replaced by a rare and historic 1927 E.M. Skinner Pipe Organ, Opus 669. On Facebook: E.M. Skinner Opus 669 Project. The basilica still has financial obligations toward the project.

View the project website at http://Opus669.com. Contributions can be made by placing your envelop marked “ORGAN” in the Sunday  Collection at the basilica or in the U.S. Mail, or visit the basilica website at www.sacredheartbasilicasyr.org and click on the word “ORGAN” and then the Blue PayPal button to make a contribution via credit or debit card.

People have asked about a payment plan. If a payment plan is desired, the basilica can set you up for one year. (Source: Basilica bulletin)