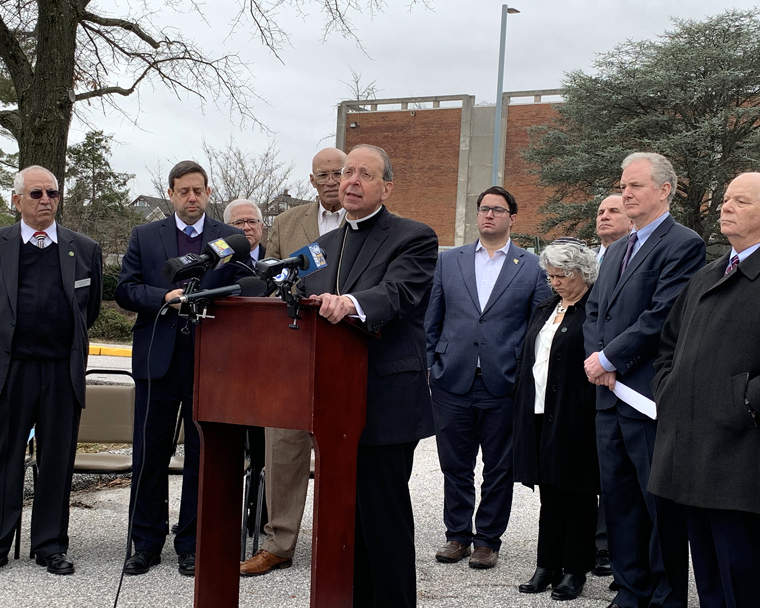 “We are deeply disturbed by the recent apparent rise in anti-Semitism, in particular, the violent attacks that took place last year during the Hanukkah celebration in New York and on the kosher market in Jersey City,” Archbishop Lori said at Jan. 13 news conference outside the Baltimore Hebrew Congregation in Pikesville.

“I commend our Senate leaders for calling us together today to condemn these acts, but also to take concrete and necessary measures to do everything we can to protect the rights of all people,” he said.

The senators are proposing to quadruple funding in next year’s federal budget for the Nonprofit Security Grant Program, which provides assistance to religious and other nonprofit institutions that are potential targets for terrorist attacks. They were joined by Rep. John Sarbanes, a Maryland Democrat.

Stressing the need for the increase, Van Hollen said the FBI has reported anti-Semitic attacks rose 35% between 2014 and 2018. Speakers also cited attacks on mosques and Christian churches, including recent mass shootings in Texas.

If the proposal is successful, the program would provide an additional $360 million in security assistance each year.

“Religious institutions are targets. Europe’s known this for a long time and their governments have participated in making these facilities safe for people to be able to attend,” Cardin said. “We now recognize in the United States that we are similarly vulnerable with religious institutions being targets for terrorism.”

Howard Libit, president of the Baltimore Jewish Council, said the federal funds are greatly needed amid the threat posed by the rise in anti-Semitism. Libit said many members of Jewish congregations have had to give more to their synagogues to offset the increased security costs.

Rabbi Shmuel Silber of Suburban Orthodox Toras Chaim Congregation said he was saddened by the recent spate of anti-Semitic attacks, but he was hopeful in light of the support of the government and other faiths.

“We are emboldened and we will continue to shepherd our respective communities in our faith traditions and never bow to hate and bigotry,” Silber said.

Sheila Evers, director of advancement for St. John Regional, said the school received $100,000 to upgrade its security, including adding magnetic locks, new lighting and a perimeter fence. Evers said the funds helped implement the recommendations of threat assessment conducted by the Department of Homeland Security and the Frederick Police Department.

Both Cardin and Van Hollen praised Archbishop Lori’s efforts at forging stronger bonds among the interfaith community in recent years.
“He’s been an incredible leader on bringing us all together, all the faith communities together,” Cardin said.

Archbishop Lori said he would work with his colleagues at the U.S. Conference of Catholic Bishops to ensure that the bipartisan grant program, which began in the wake of the 9/11 attacks, continues to grow.

“The concrete steps we support here are vitally important, but we also continue to put our faith in the simple act of coming together, standing side by side, to demonstrate that love will always be a greater power than evil,” Archbishop Lori said.