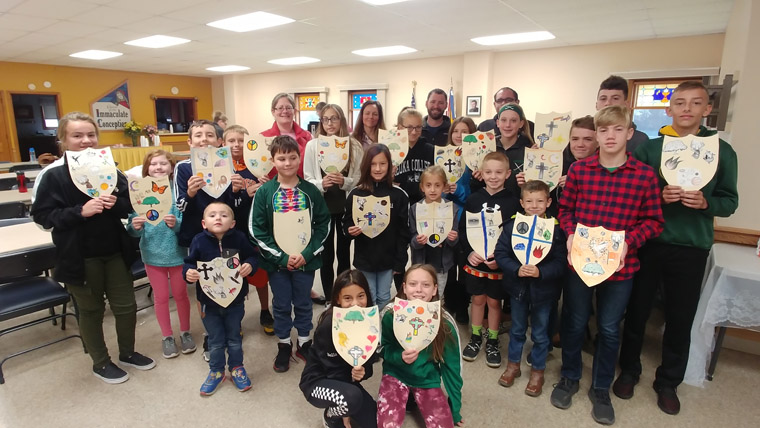 On Sunday, Oct. 13, 2019, the youth in the religious-education program at Immaculate Conception Church in Greene had their first monthly S.T.R.E.A.M. (Science, Technology, Religion, Engineering, Art, and Mathematics) lesson.

Recognizing that the 21st century is driven by creativity and innovation, the Faith Formation planning team at Immaculate Conception adopted this year a unique program that nurtures inventiveness, imagination, and ingenuity to engage our students and families along their faith journey.

Our program seeks to help youth think deeply and develop skills with a once-a-month S.T.R.E.A.M. lesson, monthly service projects to help those in need as well as one Sunday morning Mass each month designated as a Youth Mass.

On Oct. 13 the children, teachers, and parents gathered in the social hall for a short media presentation that began with a picture of a knight carrying his shield, traveling about the country.

The question was asked, “What is the importance of a shield to a knight?” A few eighth-grade youth raised a hand to answer: “It could be used in battle for protection. It had an emblem for others to see where they were from.”

This began a short discussion of the importance of a shield emblazoned with images and symbols. The group was then shown the coat of arms created for Bishop Douglas J. Lucia, and they learned about several symbols that were special to him, that were on his shield.

They learned that this shield is now on the wall at the Cathedral of the Immaculate Conception in Syracuse. Next was shown a variety of symbols and signs and their meaning was explained.

The youth were encouraged to think about what symbols reflected their personality, expressed where they were on their faith journey, and the kind of person they were inside.

One symbol was the rose. Father Paul Machira has shared with the parish the significance of the rose: It shows the beauty of life but also shows the thorns along the way. The youth were asked to think about their family and what they might be known for: musicians, bakers, athletics, farming, etc. The youth were encouraged to include the fleur de lys flower image on their shield, as this is an image of the Immaculate Conception. This would show that they belong to our parish family.

Parents had prepared a display table with over 45 symbols and images cut out on black and white paper. The tables were ready with markers, glue sticks, and scissors. The youth chose the symbols that expressed their personality and their faith. Some used their smart phone to look up what saint’s feast day was on their birthday. Then they worked at their table to color, paste, and create a personal shield of faith (pictured above).

As teachers walked about the room they offered encouragement and enjoyed talking with the children about what they chose and why they chose it. Older children sat with younger children and offered support through positive example. It was a wonderful morning of taking one step forward on our journey of faith.