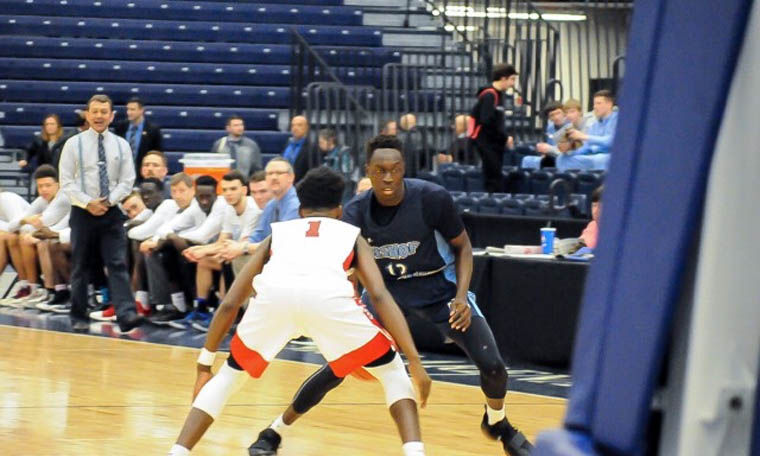 The simplest policy for basketball player David Cifonelli is to feed the “giant.”

“My best move is to pass to him, so he shoots it and makes it!” he said. “Then we both look good.”

Cifonelli was speaking of his six-foot-three-inch Bishop Grimes High School teammate David Mo, who is one of three fearless refugees happily serving as role models at the East Syracuse school.

What would happen if Grimes didn’t have students from foreign countries? Why are they important?

“I just think it goes down to our Catholic faith: Welcome everybody regardless,” said guidance counselor Ed Gray. He added: “Come to Bishop Grimes. We’re going to help you, educate you, and help you become the person you can be.”

Seniors Mo and Cifonelli, a three-sport athlete, started at Grimes as seventh-graders. “I remember first coming to this school,” Cifonelli said, “and I saw David as this giant. … He’s just a great kid to be around. He’s really friendly to everybody, he’ll help you. He knows what he’s good at and he’ll help you with that. So he’ll take his strengths and make them yours.”

“On and off the court, he’s pretty unselfish,” Gray said of Mo.

Mo was born in Sudan before it split and became the countries of Sudan and South Sudan. When he was 20 days old, he moved to Egypt. He was 12 years old when he came to America. 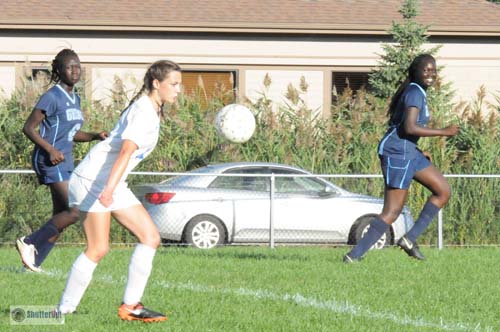 He attended Cathedral Academy at Pompei, a school that he found to be welcoming. “I kind of found my flow,” he said.

He handles questions with a hissing intake of breath as if he’s absorbing all the nuances. “I think math is my biggest challenge,” he said, but he gets help and works on it. He likes theology because it’s “good to hear people’s opinions about what they believe in.”

Mo, who also played soccer in the past, is a four-year starter on the varsity basketball team. He shoots from “as far back as he can go,” Cifonelli said.

Where did that ability come from?

“Probably loads and loads of practice and repetition and, just like anything, just working on his skills,” Gray said.

When Mo was a freshman, the basketball team went to the state final four. Last season, he was named honorable mention All-CNY and first- team All-League in the Onondaga High School League Liberty division. This year he was a member of the Basketball Coaches Association of New York Central All-Stars. Mo figures that this year, the Grimes Cobras have a shot at winning the sectional title.

So Mo is the star of the team?

Gray said: “He won’t ever admit it but, yes, David’s, if not our best player, he’s One-A. He’ll play in college.” The particular college hasn’t been determined yet.

David Mo’s half-sister, Adut Mo, is a junior at Grimes. Because of the civil war at the time in South Sudan, her parents moved to Cairo, Egypt, where she was born. The family moved to Alexandria, Egypt, and then came to this country when she was two years old for “a better future.”

She attended Cathedral Academy at Pompei. “Adjusting was easy because I was so young,” she said. “I was beginning just like the other kids.”

“Academically,” Adut said, “coming to Grimes was more challenging, in a good way.”

She explained: “In sixth grade everything wasn’t due on a certain day. Now you have to manage your time more wisely coming to Grimes and being more organized.”

She finds chemistry to be a challenge, but these refugee students are hardworking, Gray said.

“I think they realize the opportunity that they have and they want to make the most of it, not only for themselves but for their younger siblings and for their families.”

Adut, who started playing soccer last year, was named an honorable mention All-Star in the Patriot National division this season. Her soccer team finished 9-8, including a 6-2 league record, compared with two wins last season when the team had mostly junior-high and ninth-grade players.

Adut also plays basketball, along with her Grimes classmate and cousin Lora Marial. Lora, of South Sudanese heritage, was born in Egypt and came to this country when she was six months old.

“I’ve been accepted,” she said. Like David Mo and Adut Mo, she attended Cathedral Academy at Pompei. Grimes surprised her with a considerable amount of work in religion class, she said, but she feels it’s worth it.

She is proud of her service projects. “We did the fish fry at Blessed Sacrament on Fridays during Lent,” she said.

‘A LOT OF DIVERSITY’

A basketball highlight for Lora last year was beating Hannibal to keep going in the playoffs. This year’s soccer highlight for her was beating Bishop Ludden 1-0. She was a second-team soccer All-Star in the Patriot National division.

Grimes junior Rhonee Shea Pal is thrilled to have Adut and Lora as teammates on the basketball and soccer teams. “It feels just like family,” said Rhonee, who will be sidelined this basketball season because she broke her hip playing soccer.

This year the girls soccer team qualified for sectionals after only five games. “Say we’re losing by a few points,” Rhonee said. “Lora would definitely … bring humor in and cheer us up more and get us pumped up. And then Adut, she’s just positive and we’re like, ‘We got it.’”

“If they weren’t here,” Rhonee said of the cousins, “it’d be so much different. They just contribute a lot.”