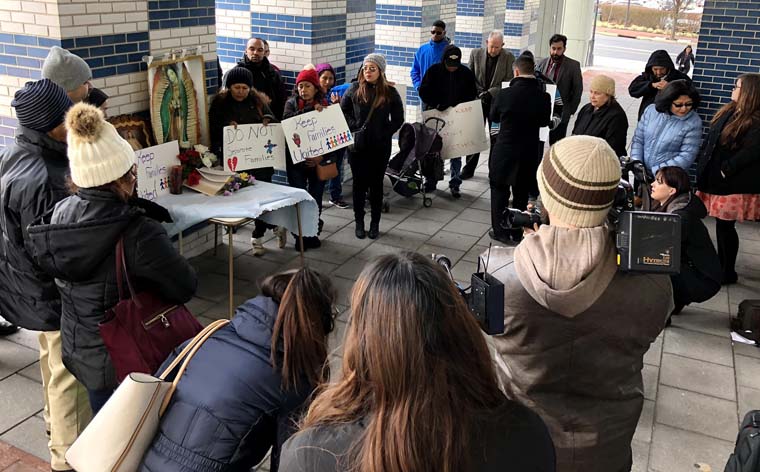 CAMDEN, N.J. (CNS) — The blistering cold did not stop a group of 35 people from gathering in front of Sen. Cory Booker’s office in Camden Dec. 6 to stand in solidarity with a couple facing deportation.

Camden Bishop Dennis J. Sullivan, diocesan clergy, Catholic Charities staff, parishioners and other community members were there to participate in a prayer vigil on behalf of two particular individuals in attendance: Oscar and Humberta Campos.

The Campos — who are the parents of three U.S. citizen children, business owners and beloved parishioners of Holy Cross Parish in Bridgeton — accompanied the group, standing side by side with family members. In Oscar’s hand was a sign: “Stop Deportation.”

Later that day, a spokesperson for Booker said that while the senator’s office worked for months with the Campos family and federal officials on the case, “we are extremely disappointed that ICE has denied the request for a stay of removal and saddened to see another family needlessly torn apart.”

The next day, the couple would have to report to U.S. Immigration and Customs Enforcement to show proof they had purchased one-way tickets back to the Campos’ hometown of Tamaulipas, Mexico.

“The town I come from is so dangerous that you can’t even own a home, a business or a new car without being extorted by the drug cartels,” Oscar was quoted as saying in a news release. “They control everything,” he added.

According to him, if you refuse to pay a certain amount of money, members of your family can be kidnapped or murdered. “Living in the United States was my only hope,” he said.

In 1989, Oscar fled the violence and dangers of his hometown and crossed the border into Texas. He made his way to Bridgeton, where he was able to pursue the American dream — raising his kids, obtaining a work permit, starting a business, buying a home, earning his GED and serving as an active member in his church with his wife and children.

At the vigil service, his youngest son, Erwing, 15, stood wrapped in a blanket, holding a sign: “I want my parents to see me graduate.”

Glancing at his father who was speaking with Bishop Sullivan, he said, “I’ve been praying to God every single day that they won’t be forced to leave. I need them to stay with me. I can’t even imagine what living without them would be like.”

Oscar’s daughter, Janet Campos, fought her way through tears as the group prepared to pray the rosary.

“My parents are good people. I can’t say that enough. They’re hard-working and they’ve lived here for 30 years,” she said, pausing. “And they fought so hard to provide us with a better life than they had.”

While both Oscar and Humberta Campos have been working legally, paying taxes and continuing to meet regularly with immigration authorities, they have been living in fear of deportation.

And, the family’s fears came true in early December 2013 when a van approached Oscar as he waited in the parking lot for his wife to finish a routine visit with immigration authorities.

Oscar was arrested and held at Elizabeth Detention Center, capturing the attention of the media and spurring a series of rallies and vigils that were held outside of the facility, led by his loved ones, clergy, and members of the community. On Christmas of 2013, Oscar was released from the facility where he was greeted by his family. Their only Christmas wish was to be reunited with their father.

Yet, now almost exactly four years later, the family once again had only one Christmas wish: avoiding permanent separation.

In one final attempt to remain together, the family prayed the rosary with the group gathered outside Booker’s office, with hopes that the vigil would serve as a reminder of the intended assistance that the Democratic senator had promised.

“Sen. Booker has been a champion for immigration. We want to hold him to that standard for the law abiding, hardworking people, who are looking for a better life in the U.S.,” Deacon Arnaldo Santos told the Catholic Star Herald, Camden’s diocesan newspaper.

In his statement, Booker’s spokesperson, Tom Pietrykoski, criticized the Trump administration’s immigration policies, saying they “stand in stark contrast to some of our most fundamental American values and callously target New Jerseyans who contribute so much to what makes our state and nation strong.”

“Mr. and Mrs. Campos’ case reinforces the urgent need for us to stand united in seeking common sense solutions to our broken immigration system that are consistent with our core American principles,” he said.

At the vigil, Bishop Sullivan encouraged politicians “to work toward repairing this broken immigration system. And there is a human aspect to all of this. (The Campos family) are my brothers and sisters, and they are yours.”