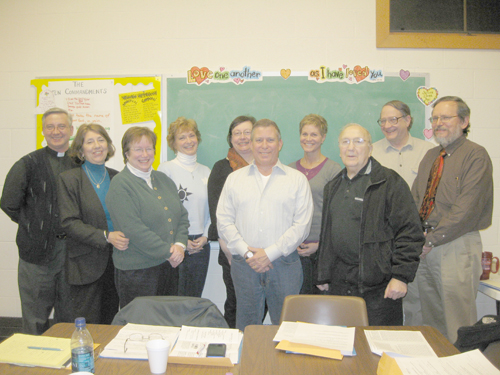 Two parishes plan to host events to welcome back members

OSWEGO — There are many reasons why Catholics leave the church, and many of those reasons are founded on misinterpretations of the church’s teaching or its position on some of the issues facing society. Some leave because they think the church is not welcoming to those who have gone through a divorce or because their mother or father wanted to be cremated 25 years ago and they felt the church would not allow it.

Two Northern Region parishes, St. Joseph’s and St. Stephen’s, are coming together to try to bring non-practicing Catholics back to the faith.

The Welcome Home Committee is made up of members of both parish councils. Because the churches are linked, it is a significant arrangement. Father Andrew Baranski is pastor of both churches and he is carefully working to bring the two faith communities together. St. Stephen’s is a traditionally Polish parish on the east side of the city, and St. Joseph’s is traditionally Italian and located on the west side. The committee putting their efforts and resources together to welcome people back to church is one example of coming together for a common purpose. The parishes have also combined their faith formation programs and they offer one bulletin for both parishes. The Mass schedule for both was modified and is still a point of contention for some parishioners. There is also a newly-formed youth group offered at St. Joseph’s but open to all young people in the community.

The committee met March 11 to work on planning a special “Welcome Home” event to take place between Easter and Pentecost Sunday. Father Baranski has delivered homilies about welcoming back people who have stopped attending church and both church buildings have brightly colored “Welcome Home” banners hanging outside. They plan to run large advertisements about their events in the local newspaper.
David Roman is chair of the committee and he said they need to work on devising a plan that will foster cooperation.

“We have already combined our CCD programs but we need to devise a plan of cooperation to bring our communities together,” Roman said.
Father Baranski pointed out that the young people of high school age already know each other because they attend the same high school and the elementary school children often get together for sport activities. St. Joseph’s has also recently added a children’s Liturgy of the Word as part of the Mass. The real concern facing the committee is the fact that church attendance for both parishes is down.

“We’re really trying to hash out different ideas to determine what we can do to address this,” Roman said.

Discussion around the table opened up the idea of evangelization and how to keep the parish community that is already there alive and vibrant. Father Baranski said he wants to be sure the parishioners are part of the “Welcome Home” process.

“We can send mailings and make phone calls, but the most effective way to reach out is with members who are already parishioners,” Father Baranski said. “They can be the instruments to welcome others on behalf of the community.”

The committee agreed that bringing everyone to the table to talk about the issues that are separating them from their faith can be easier said than done.

“There is a lot of misguided information out there,” Father Baranski said.

Conversation kept bouncing between how to welcome members back and how to strengthen the communities that already exist.

Committee member Roseann Falise admitted that she thinks the parish communities do not put forth enough effort to keep active. “My concern is that it feels like we’ve gotten away from a community prayer vision. We don’t extend ourselves. The church used to offer novenas and the rosary and other events and those are the things that bring parishioners and families together. We need something like a parish retreat or mission.”

Father Baranski admitted that there are some parishes that have gotten away from older Catholic traditions. He also pointed out that St. Stephen’s offers recitation of the rosary before Mass. Another committee member, Michele Reed, suggested that the parishes offer a folk Mass or other ways to appeal to younger parishioners.

“We have gotten away from collective worship opportunities,” Reed said. “Now we just have Mass and the other stuff has faded away. I don’t know if it’s lack of interest or busyness.”

The members recognized how their coming together for the Welcome Home committee is one way to bring the two parishes together. Michele’s husband, Bill Reed, is also on the committee. “The only way this can happen is with familiarity,” he said. “As we start doing this kind of stuff, we’ll start to get to know each other and trust each other.”

Roman’s response was, “This is a small community and let’s face it, a lot of us already know each other.”

The struggle of two parishes coming together is one that the whole diocese can relate to as it undergoes the reconfiguration process. The people of St. Joseph’s and St. Stephen’s want to bring people back to church and at the same time work on welcoming each other to the St. Joseph’s Day Dinner or the Polish Festival. St. Joseph’s Deacon Joe Chillemi offered a few words of wisdom about churches linking and merging.

Father Baranski added, “It’s hard because your head tells you one thing but your heart tells you something else.”

The topic eventually returned to just how the committee is going to offer a much-needed evangelization program. The initial information for Welcome Home came from the Diocesan Pastoral Council (DPC) which is making evangelization this year’s priority. Michele Reed offered that surveys indicate what non-practicing Catholics miss most is the Eucharist and the comfort they felt as children when they belonged to a parish. “We’re talking about advertising and getting them through the door and they’ll come through the door because they are searching,” she said.

The next meeting for the group was scheduled for after Easter and the agenda will bring more focus to the Welcome Home event. Some of the ideas include ushers passing out cards to all parishioners as they come into church in the upcoming weeks. The cards will highlight events at the parishes as opportunities to invite someone they may know back to church. Discussion also included the option of inviting speakers who are well-versed on some of the topics of concern such as the annulment process, reconciliation, family ministry and other areas. The committee members stated they realize they themselves must be welcoming and willing to listen when former Catholics bring up their apprehension about coming back to church.

“We really need to open up our hearts and listen to where people are coming from,” Roseann Falise said. “It’s about the conversation.”