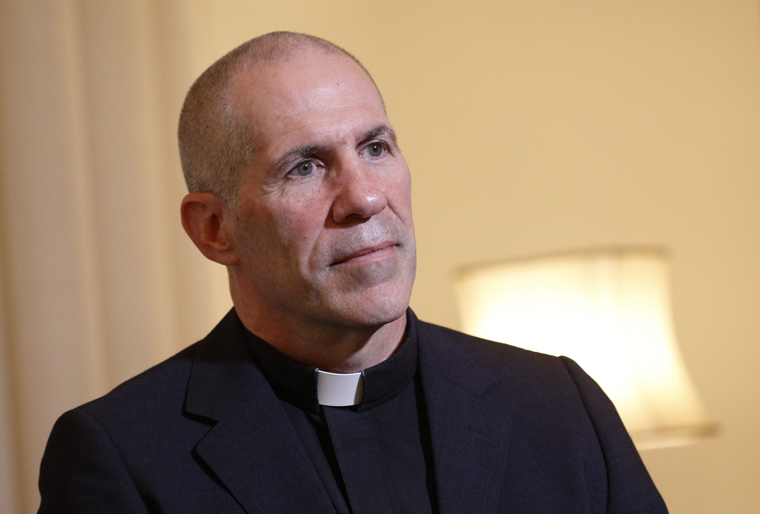 HAGATNA, Guam (CNS) — Archbishop Michael J. Byrnes of Agana urged people in the midst of the coronavirus pandemic to persevere in kindness.

In a video message posted March 26 on the Facebook page of the archdiocesan newspaper, Umatuna Si Yu’os, he said: “We’re going through a Lent that is extraordinary, but it’s a Lent that God has given us.”

The archbishop pointed out that people are looking at the world differently than they did three weeks ago, focusing on what’s important in their lives. He also said he has seen more expressions of kindness, care and courage in recent days.

Recounting his own experience as a marathon runner, he said the secret in facing any challenge is perseverance, going one step at a time.
“The challenge is to persevere,” he said, adding that when the world resumes its normal routines, he hopes people show the same kindness and compassion.

God’s grace is “there for us; let’s receive it,” he added.

In a March 16 pastoral letter to archdiocesan Catholics, the archbishop urged them to continue to hold fast to prayer and penance this Lent as they dealt with the coronavirus pandemic which he described as an “unprecedented threat of worldwide concern” that people must work together to overcome.

Archbishop Byrnes said he was writing out of care and concern not only for the spiritual well-being of the island’s Catholics but also hoping for their physical health and wellness. Guam is a territory of the United States.

He announced that Sunday Masses and parish events would be suspended from March 17-April 18 and encouraged Catholics to participate in the Mass airing on a local radio station and archdiocesan social media platforms such as Facebook Live. He also pointed out that weddings and funerals could not exceed 50 people in attendance.

The archbishop urged Catholics to pray for health care workers, researchers and government leaders on the front lines of this pandemic and for those who have become ill. “We are the church universal and where one part of the body suffers, we all suffer,” he wrote.

He also urged believers to pray for each other, saying: “It is possible that during a time such as this we might forget that God is with us, even treat one another with a lack of charity. Do not forget the love of Christ for each of us and allow that to inform your interactions with those around you.”

A March 16 archdiocesan announcement said the chancery offices of the archdiocese also would be closed from March 17-27 as part of cost-reduction measures primarily related to its bankruptcy reorganization. The archdiocese filed for bankruptcy last January in the wake of sexual abuse allegations and lawsuits.

Offices will reopen with streamlined workdays and hours for an interim period starting March 30.

“The adjustment is part of the archdiocese’s efforts to limit expenditures to essential operations and debt services as a result of financial constraints brought on by the bankruptcy process. As well, we fully expect recent developments related to the COVID-19 emergency to have a definite impact on our finances,” the announcement said.