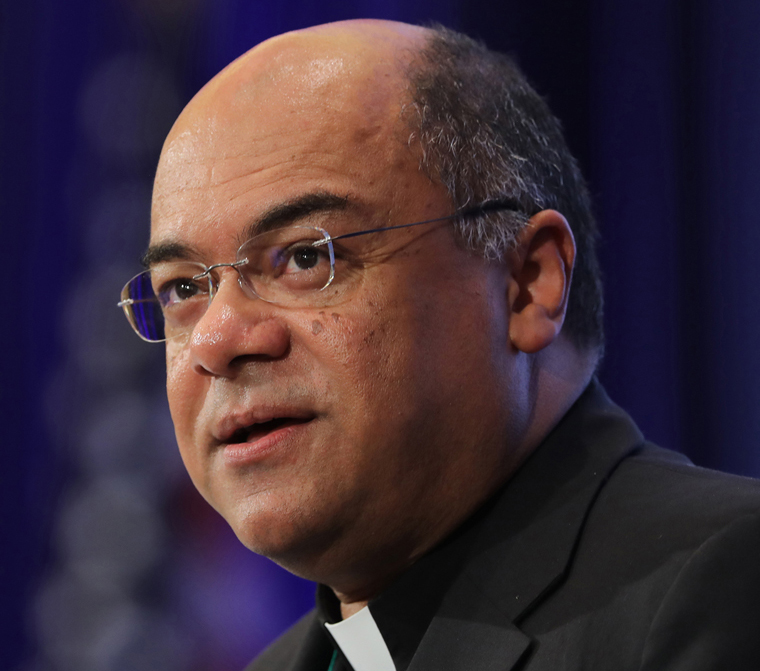 CLEVELAND (CNS) — The response of Catholics to racism and racial injustice can lead to a watershed moment “if we put in the work we can do and put in the effort that needs to be undertaken,” said the chairman of the U.S. bishops’ Ad Hoc Committee Against Racism.

Bishop Shelton J. Fabre of Houma-Thibodaux, Louisiana, admitted the work of “dismantling personal racism and institutional racism” will be difficult.

But, he explained, through “prayer and action” and following the nonviolent example of Jesus’ life, the beloved community that God envisions for all people can be realized.

“We know that by the work of our hand and by the grace of almighty God we can be a part of advancing the discussion and moving hearts and moving people and moving society to root out racism and intolerance,” he told Catholic News Service July 23.

“I fully believe an important part of that is our call for each and every person to examine their hearts and their experiences and to encounter those who are on the margins, who are not part of our ordinary circle of friends. When we do that, we can hear the pain and reality of racism,” the bishop said.

Addressing racial injustice means recognizing the human dignity of each person, a basic tenet of the Catholic faith, he said.

“I really believe these encounters with people, once we are able to put a face and a name on it, I think those encounters will lead people to be stronger advocates to work to dismantle racism and to pray and to do all of this as people of faith who are willing to accept the challenge that Jesus Christ calls us to embrace in loving one another.”

Bishop Fabre, who is one of 10 Black Catholic bishops in the U.S., also called on people of faith to study the history of the church as a diverse place where all people are welcome.

“Right now in the United States, the church has always been diverse and is becoming more and more racially diverse. Learning about the richness of that diversity and the many different cultures in the church can only strengthen who we are as a church and be the best disciples of Jesus Christ that we can be,” Bishop Fabre said.

He pointed to the resources gathered on the U.S. Conference of Catholic Bishops’ website at www.usccb.org/racism as a place to begin. The site includes educational materials, prayers, and study guides that allow parishioners to begin learning about racism.

Such resources, however, are only a start, he said, encouraging people to learn by reaching out to each other.

The bishop cited the example of two women, one white and one Black, who began talking about their teenage sons who were learning to drive. The white woman told him after Mass that “as mothers, they started talking about providing a car for their children.”

She related to Bishop Fabre how the Black woman was “scared about what would happen when the police stop him.”

“And the other woman told me she had to stop and think,” he recalled. “She said, ‘I didn’t know what to say. Here I am ready to provide my son a car. My experience was not hers. I drew deep insight as a mother from what she said.’ You could just see, how she realized ‘OK, I understand now.’

Such encounters can go a long way in beginning to overcome racism that is inherent in society, he said.

As chairman of the ad hoc committee, Bishop Fabre, 56, shepherded the U.S. bishops’ 2018 pastoral letter on racism to the finish line. The document, titled “Open Wide Our Hearts: The Enduring Call to Love — A Pastoral Letter Against Racism,” calls on Catholics to root out the sin of racism in their lives, educate themselves about racism and work to end systemic racism.

The church, it said, must be as outspoken about racism as it is about abortion, the death penalty and assisted suicide. Sections examine the history of mistreatment of Black Americans and the oppression of Latinos and Native Americans. The letter denounces rising anti-Semitism and anti-Muslim attitudes as well as xenophobia. Segments address police brutality, mass incarceration, and discrimination in education and housing opportunities.

It is the first pastoral letter on the topic since “Brothers and Sisters Unto Us” was adopted in 1979.

Bishop Fabre said parishes, dioceses and organizations have studied and implemented the pastoral in day-to-day life. In response to criticism the 2018 pastoral letter is too timid in its approach, he urged people to “take it and move it forward.”

“I think what the pastoral letter does say and some of the challenges that it issues are not fully appreciated,” he said. “It’s my hope that (people) can begin envisioning a future pastoral letter that will be different because we will have moved it forward.”

Bishop Fabre believes the document can serve as a guide in the church’s response to the unequal treatment of people of color by police and help people determine how they will respond to the rising nationwide movement to address the country’s racial injustice.

Since the Memorial Day death of George Floyd, a Black man who died while pinned to the ground by a white Minneapolis police officer, Bishop Fabre has seen a “deeper desire” among Catholics and his fellow bishops to “assist in dismantling racism” wherever it exists.

Bishop Fabre welcomed the interest of Catholics to join grassroots movements. “People are desiring to do something,” he said.

He also cautioned that prudence be exercised.

“Catholics can work with organizations that embrace the moral and social teaching of the church,” he said without specifically mentioning the Black Lives Matter movement, which has been the most visible organization leading demonstrations for racial justice. “When organizations take a clear departure from the Gospel vision of the church … then involvement becomes problematic.”

It is important to demonstrate that the work of addressing racial injustice comes from the roots of the Catholic faith, the bishop added.

“One of the important things we bring to these discussions is our faith and what our faith calls us to be about. To these questions we bring our great respect for the dignity of human life,” Bishop Fabre.

Such work also can open clergy in particular to charges of being political or taking sides with a particular partisan point of view, the bishop acknowledged. But, he said, such work “is the right thing to do.”

“We enter into the realm of politics, which is part of our lives, not as politicians but as pastor and disciples of Jesus Christ to bring about just laws. There’s also the deeper reality of converting hearts so that people understand that we are called to more than just the law. We are called to become this beloved community. We are called to bring the community of God to the earth.”