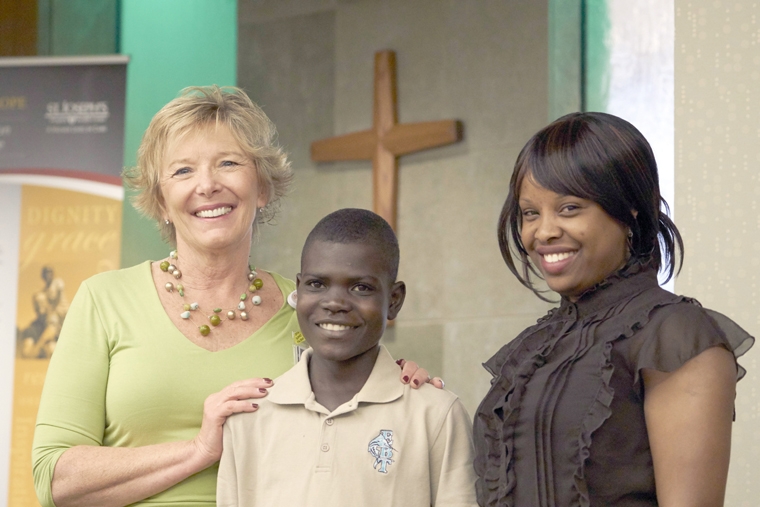 Valder Dormilus, 18, a native of Haiti, smiled shyly May 8 as cameras flashed around him and reporters asked, through his interpreter, Darline Zidor, how he was feeling after receiving heart valve replacement surgery last month at St. Joseph’s Hospital Health Center in Syracuse.

“Before his surgery he was much weaker, but now he is stronger and much better,” stated Zidor, who lives in Liverpool and is also from Haiti. During the time Dormilus was in Syracuse, Zidor was not only his interpreter, but also opened her home to him for aftercare and recovery once he was released from the hospital.

Dormilus, who lives with his father, sister and brother in Haiti, came to Syracuse in April specifically to have cardiac surgery at St. Joseph’s through the efforts of the Haiti Cardiac Alliance. Born with two defective heart valves, Dormilus’ physical growth, energy level and even his education were severely affected by his illness. His family watched in despair as he continued to grow weaker each day. Without a pediatric cardiologist in Haiti, the teen’s prognosis appeared grim until he was referred to Owen Robinson, the executive director of the non-profit organization Haiti Cardiac Alliance.

Robinson began the organization, which is funded by donations, to help children under the age of 25 in Haiti suffering from life-threatening heart problems find medical help. The Haiti Cardiac Alliance has a strong and diverse network of medical professionals and partners in 25 hospitals in nine countries. These hospitals and professionals offer surgery and cardiac care at little to no cost for patients referred by the organization. Referred patients are evaluated and then matched by need with the hospital or professional who can provide the best surgical options. Through the efforts of Robinson and the Haiti Cardiac Alliance, hundreds of Haitian children are given life-saving cardiac surgery every year. The organization has also helped to significantly improve cardiac care and aftercare for pediatric heart patients at Saint Damien Hospital in Haiti.

After learning of Dormilus’ medical issues, Robinson reached out to St. Joseph’s Hospital and Dr. Charles Lutz, who specializes in cardiac care. With Lutz leading the cardiac team, the two valves in Dormilus’ heart were replaced.

“We [St. Joseph’s] were ecstatic to be able to help,” stated Betsy Bedigian, communications manager and spokesperson for the hospital. “We believe in living out our mission through caregiving at St. Joseph’s. Our president and CEO has been very involved in helping with Haitian relief efforts and when Owen reached out to us we were happy to be able to help. We are grateful for all the physicians on our cardiac team, especially Dr. Lutz, who worked tirelessly with the Haiti Cardiac Alliance for Valder. We are so glad to finally see this young man smiling and feeling so well.”

During his treatment, Dormilus relied on Zidor to help translate what was happening. “The communication was the hardest part for him,” stated Zidor. “He doesn’t speak English, just Haitian Creole and French.” While recovering, Dormilus did acquire a taste for a Syracuse treat: pizza! “His favorite food, hands down, here is pizza,” laughed Zidor.

After 15 days of recovery and follow-up care, Dormilus returned to Haiti on May 10, but before leaving, he had an opportunity to say thank you to the St. Joseph’s Hospital team, Dr. Lutz, and visit with Owen Robinson before boarding a plane in New York City for Haiti. Once home, Dormilus’ plans included spending time with his father, joking with his brother and sister and playing piano.

“He was so excited to be heading home and seeing his family again,” stated Zidor. “This surgery has meant everything to him. It saved his life.”