Hostility, violence are ‘betrayals’ of religion, pope says in Iraq 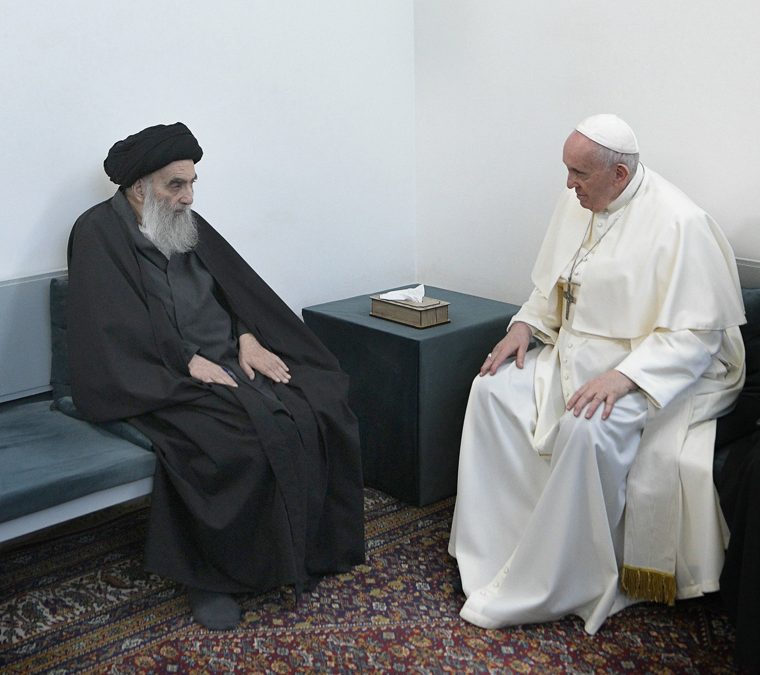 UR, Iraq (CNS) — Traveling to the birthplace of Abraham, Pope Francis urged believers to prove their faith in the one God and father of all by accepting one another as brothers and sisters.

From a stage set on a dusty hill overlooking the archaeological dig at Ur, Abraham’s birthplace about 10 miles from modern-day Nasiriyah, the pope called on representatives of the country’s religious communities to denounce all violence committed in God’s name and to work together to rebuild their country.

“From this place, where faith was born, from the land of our father Abraham, let us affirm that God is merciful and that the greatest blasphemy is to profane his name by hating our brothers and sisters,” the pope told the representatives.

“Hostility, extremism, and violence are not born of a religious heart: they are betrayals of religion,” he insisted. 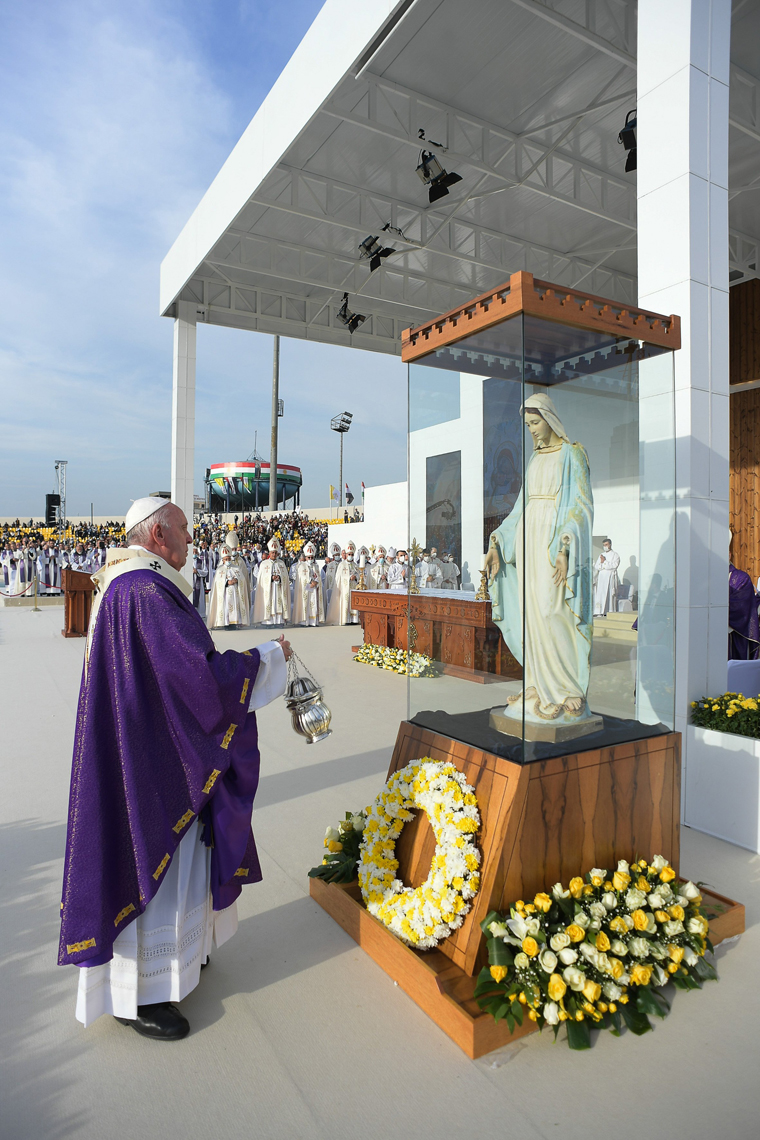 Having witnessed or even experienced persecution for their faith, the Christians of Iraq must be careful not to harbor thoughts of revenge, Pope Francis told them. After a full morning paying tribute to the victims of Islamic State violence, Pope Francis reached the last major event of his trip to Iraq: Mass March 7 with some 10,000 people at Irbil’s Franso Hariri Stadium. Many ignored the social distancing measures put in place, and few wore the masks they were required to have because of the COVID-19 pandemic. Irbil, capital of the Kurdistan autonomous region in northern Iraq, hosts Syrian refugees and hundreds of thousands of displaced people, particularly Christians, from Mosul, Qaraqosh, and other towns that had been under the thumb of Islamic State militants in 2014-2017. After blessing the altar with incense, Pope Francis blessed a partially restored statue of Mary from a parish in Karmless. The Islamic State militants decapitated the statue and cut off its hands. The restoration re-attached the head, but left the hands dangling. “Here in Iraq, how many of your brothers and sisters, friends and fellow citizens bear the wounds of war and violence, wounds both visible and invisible,” the pope told the crowd. “The temptation is to react to these and other painful experiences with human power, human wisdom,” but the path of Jesus was to serve, to heal, to love, and to offer his life for others. (CNS photo | Vatican Media)

Pope Francis arrived in Ur after a 45-minute early morning meeting in Najaf with 90-year-old Ayatollah Ali al-Sistani, one of Shiite Islam’s most authoritative figures.

At the large interreligious meeting later, with the Ziggurat of Ur, a partially reconstructed Bronze-Age pagan temple, visible in the haze, Pope Francis insisted that when Jews, Christians, and Muslims make a pilgrimage to Abraham’s birthplace, they are going home, back to the place that reminds them they are brothers and sisters.

Representatives of Iraqi’s Shiite Muslim majority, its Sunni Muslim community, Christians, Yazidis, and Mandaeans, a group that claims to be older than Christianity and reveres St. John the Baptist, joined Pope Francis at Ur.

Farmon Kakay, a member of a delegation from Iraq’s small Kaka’i community, a pre-Islamic religion and ethnic group related to the Yazidis, told Catholic News Service, “To see His Holiness is big news for me. We want the pope to take a message to the government to respect us.”

Faiza Foad, a Zoroastrian from Kirkuk, had a similar hope that Pope Francis’ visit would move the government and Iraqi society as a whole to a greater recognition of religious freedom for all.

Wearing a white dress trimmed in gold and decorated with sequins, Foad told CNS that even though her religion is not an “Abrahamic faith,” participating in the meeting was a sign that all people are members of the one human family.

In fact, Rafah Husein Baher, a Mandaean, told Pope Francis that “together we subsist through the war’s ruins on the same soil. Our blood was mixed; together we tasted the bitterness of the embargo; we have the same identity.”

From the U.S.-led invasion of Iraq in 2003 and through the reign of terror of the Islamic State group, “injustice afflicted all Iraqis,” she told the pope. “Terrorism violated our dignity with impudence. Many countries, without conscience, classified our passports as valueless, watching our wounds with indifference.”

Just as Abraham set out from Ur and became patriarch of a multitude of believers in the one God, Pope Francis said, those believers must return to Abraham, recognize themselves as brothers and sisters, and set out to share the news that God loves every person he created.

“We believers cannot be silent when terrorism abuses religion,” the pope said. “Indeed, we are called unambiguously to dispel all misunderstandings. Let us not allow the light of heaven to be overshadowed by the clouds of hatred!”

Called like Abraham to trust in God and to set out on the paths he indicates, believers must “leave behind those ties and attachments that, by keeping us enclosed in our own groups, prevent us from welcoming God’s boundless love and from seeing others as our brothers and sisters.”

No individual or group can live in peace or achieve progress alone, he said. “Isolation will not save us.”

The answer is not “an arms race or the erection of walls” either, the pope said. “Nor the idolatry of money, for it closes us in on ourselves and creates chasms of inequality.”

The journey of peace, he said, begins with “the decision not to have enemies.”

It means spending less money on weapons and more on food, education, and health care, he said. It means affirming the value of every human life, including “the lives of the unborn, the elderly, migrants” and everyone else.

After both meetings, Iraqi Prime Minister Mustafa al-Kadhimi announced in a tweet: “In celebration of the historic meeting in Najaf between Ayatollah Ali al-Sistani and Pope Francis, and the historic interreligious meeting in the ancient city of Ur, we declare March 6 a National Day of Tolerance and Coexistence in Iraq.”