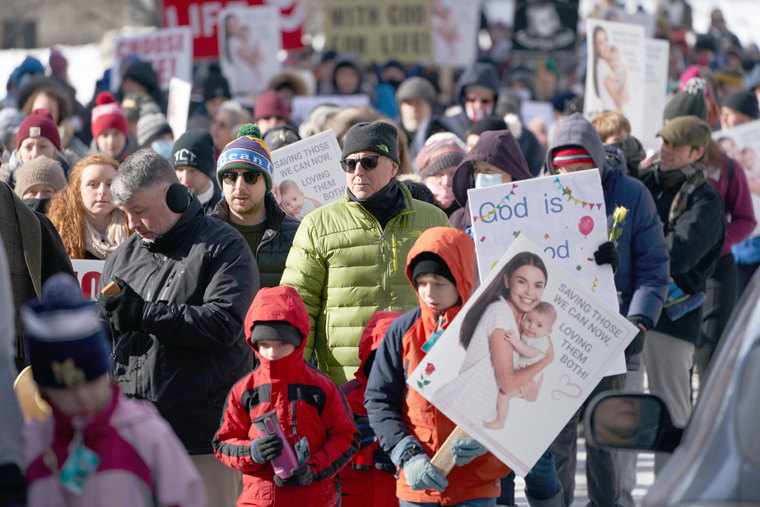 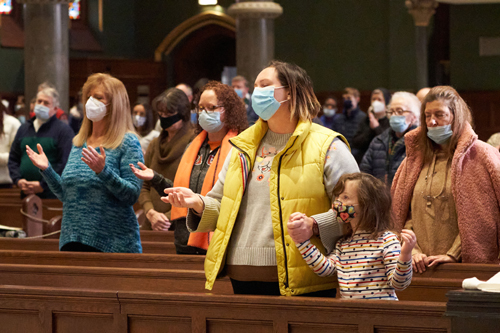 The temperature on the dashboard thermometer read “6 degrees” in Syracuse on Saturday morning, Jan. 22, a very cold reminder of the very cold day in question. It was on that day in 1973 that the U.S. Supreme Court’s landmark decision in Roe v. Wade opened the door to legalize  abortion in our country. Those who believe in the sanctity of life have been praying, speaking and marching ever since to overturn that process.

2022 could be the year that begins to take hold.

Hundreds gathered downtown to peacefully “March for Life” in the annual event sponsored by the Syracuse Right to Life Association. At the conclusion of the march, they heard about the anticipated Court decision, expected in June, that could strike down Roe v. Wade and bring the battle to the state level.

The day began at the Cathedral of the Immaculate Conception where Bishop Douglas J. Lucia presided at a Mass and Holy Hour to mark the anniversary. In his homily, Bishop Lucia cited Matthew’s “Gospel reading where Jesus not only makes the point that each child is not a piece of personal property—the legal view of the day—but is a citizen of the greatest importance in the kingdom of heaven.”

Bishop Lucia also referenced comments from Dr. Martin Luther King, asking those in attendance, “How publicly and prophetically do we portray our relationship with God in the midst of the world?” The Bishop called all there to “give witness to the dignity and sanctity of human life from conception to natural death.” 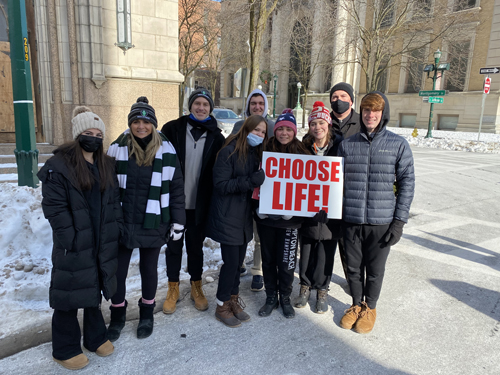 Following the Holy Hour, those at the Cathedral gave such witness, making the walk to Armory Square where more people had gathered to join in the March for Life. The combined crowd walked peacefully up Jefferson Street, crossing the Salina and Warren intersections to arrive the Onondaga County Courthouse steps, directly across from the Cathedral at Columbus Circle.

A number of voices, remarks and prayers were heard at the presentation which concluded with observations from James Salamy, J.C.L., the diocesan coordinator for Public Policy. Salamy explained the significance of the case of Dobbs v. Jackson Women’s Health Organization, a case that many observers believe will overturn the Roe case and open the door for change.

“It involves a law from the State of Mississippi that banned abortion in almost all cases after 15 weeks of pregnancy. Oral arguments in the case were heard by the Supreme Court on Dec. 1, 2021, and a decision is expected later this year, probably in June,” Salamy told those gathered. “But a decision in Dobbs v. Jackson Women’s Health, overturning Roe v. Wade, is not the end of the Pro-Life Movement by any means. Rather, it is only the beginning of the next chapter in the book of the Pro-Life Movement that is still being written.”

Salamy explained that overturning Roe v. Wade will send the decision on abortion law back to each individual state.

“If the issue of abortion goes back to the states, we in the Pro-Life Movement here in New York State will have a lot of work to do to change hearts and minds one at a time,” Salamy shared. If that happens, there will be more work to do in New York to bring about real change.

“We will have to redouble our efforts, praying even more, and fasting, adding more staff, more services and more centers to serve pregnant women in need so that they know that abortion is wrong and that they can have their child with love and support from their community,” Salamy added.