Hundreds of thousands travel for days to honor Uganda’s martyrs 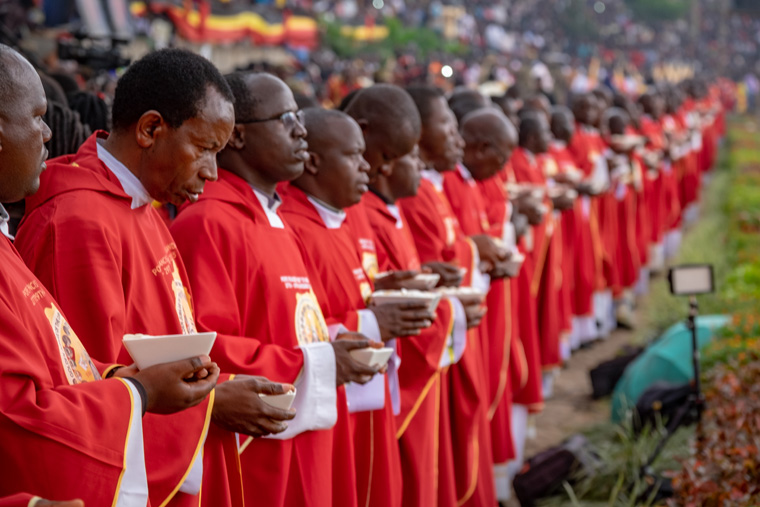 Editor’s note: Parishioners at the linked Endicott parishes of Our Lady of Good Counsel (OLGC) and St. Ambrose support 49 girls at Christ the King Primary and St. Francis De Sales Secondary Schools in Iyolwa, Uganda, with twice-a-year donations. In early June the parishes’ pastor, Father Michael Galuppi, spent nine days in Uganda, visiting the schools and touring with Father Charles Opondo-Owora, pastor of St. James Church in Johnson City, who was visiting family in his native country. OLGC parishioner and retired photojournalist Chuck Haupt traveled with them. This is the first of two stories about their visit to Uganda.

Father Michael Galuppi, pastor of Our Lady of Good Counsel and St. Ambrose in Endicott, and Father Charles Opondo-Owora, pastor of St. James Church in Johnson City, took part in two remarkable events in June, concelebrating two Masses that annually draw hundreds of thousands of people to Uganda’s Shrine of the Holy Martyrs in Namugongo, near the capital, Kampala.

The Martyrs Day Mass honors the memory of dozens of Christian men who were brutally slain in the 1880s, in particular the nearly two dozen men who died on June 3, 1886. The men, who had been serving as pages in the court of the pagan king, were burned to death after they refused the king’s order to deny their faith. June 3 remains a Ugandan national holiday.

In all, 22 Catholic converts and 23 Anglicans were put to death for their faith between January 1885 and January 1887. Pope Paul VI canonized the Catholic martyrs of Uganda, including St. Chares Lwanga, in 1964.

The Pilgrims Day Mass was celebrated on Sunday, June 2, the day before the annual Martyrs Day Mass. Sunday’s liturgy recognized the many pilgrims who walk as much as four days to reach the Uganda Martyrs Shrine. Father Galuppi said both Masses demonstrated the power of faith in action as people of all ages made the arduous trip, camping along the way without tents.

One pilgrim was recognized for being the oldest person to make the 200-mile trip on foot, as he has for the past 50 years. He’s 90 years old.

One third of Ugandans are Catholic, and the country, roughly the size of Nevada, has four archdioceses. Each year, one diocese assumes responsibility for the Pilgrims Day and Martyrs Day liturgies. It’s an opportunity for a diocese to give the rest of the country – and the world – a feel for its local customs, dress, music, and dance.

The processions include men and women in traditional dress. During the offertory procession at the Martyrs Day Mass, people came forward with gifts ranging from food they’d grown to a live chicken, carried by an elderly woman.

“The spirit, the energy, the song, the joy,” Father Galuppi said. “The hunger for the body of Christ was so evident.”

Mary Haupt is a former newspaper reporter and editor who teaches journalism at Binghamton University. She is married to retired photojournalist Chuck Haupt.

Hundreds of Ugandan priests line up, preparing to distribute Communion to the nearly one million people who attended the Martyrs Day Mass.