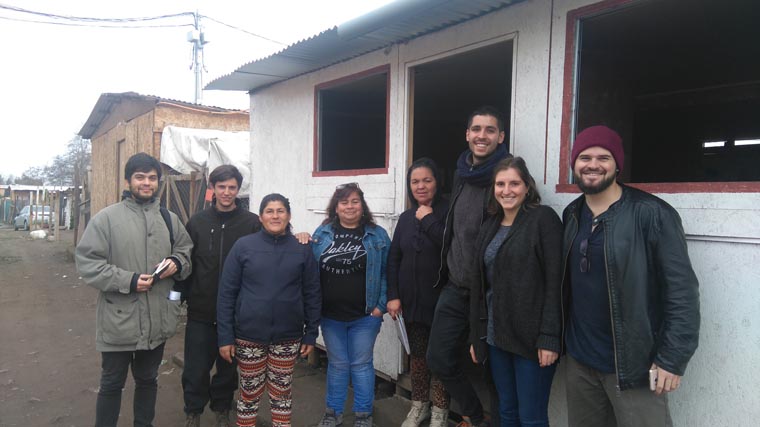 COLINA, Chile (CNS) — In winter, the dirt roads in the slum known as Rivera Sur are muddy and full of puddles.

“It gets freezing in winter, with so much rain and mud,” said Teresa Aranda, a local resident. “Sometimes I don’t let my daughter go to school because I don’t want her slipping in the mud on the streets.”

But young Chileans volunteering with a Jesuit charity have helped Aranda and more than 400 other families living in the shantytown known as Rivera Sur, 25 miles north of Santiago.

Aranda said she is grateful to TECHO-Chile, also known as A Roof for Chile.

“TECHO has helped me to insulate my house so it is less cold,” Aranda told Catholic News Service.

Thousands of young volunteers have been out on the streets with their distinctive blue and white boxes asking for money to help build houses for the poorest people in Chile. For most of them, volunteering is an expression of their faith.

“I went to a Catholic school, so from an early age we were taught to help other people,” said Clara Irarrazaval, a volunteer who has worked in Rivera Sur for the last year helping Chileans and families from countries like Haiti, Colombia, Bolivia, Peru and the Dominican Republic.

Irrazavel and fellow volunteer Felipe Jara explained how they follow the vision of the charity’s founder, Jesuit Father Felipe Berrios, by working closely with the community.

“The first thing we do when we arrive is to sit down and talk with members of the community and ask them what they want,” said Jara. When residents said they needed more community spaces, the volunteers gathered materials and, with the locals, built a meeting hall.

The hall serves as a place for people to discuss important issues, but it’s also an after-school club for the children living here. The volunteers help with the children’s studies as well as getting food and diapers for people living in the slum.

Irarrazaval is convinced that this is the best way to show her faith. She is pleased Pope Francis — whose vision of the church is one going to the margins of society — is visiting Chile in January.

“I think the church is in some kind of crisis, especially with young people — we need to be more concerned with the people around us,” Irarrazaval said. “Nowadays, we live in a world that is so individualistic, and here we come to work side by side with people in the community, and we are all equal. People need to go back to the community — these kinds of experiences can bring God to your heart. For me, faith is not necessarily about going to Mass every Sunday, it is more about helping others. I see Jesus in the special bond that I make with people here.”

Aranda and her daughter have lived in Rivera Sur for the past eight years. She said she moved there because it was hard for her to make ends meet with a landlord who kept increasing the rent and telling her not to use any water or electricity.

Aranda said she is a Catholic and, just like the volunteers, her faith is also about helping others. “If someone comes and asks me for a favor, I will always try to help them. The people from TECHO are like that as well. It’s not just about building houses, they also help with the community.”

The international organization has more than 2,000 volunteers working in different slums across Chile. Most of them are university students and, for many of them, their motivation is the same as it was for the young Catholics helping 20 years ago, when TECHO started.

Father Berrios got together with a group of university students to help build a basic wooden house that could be used as a chapel in a slum on the outskirts of Curanilahue. The mission was simple — to build a different kind of relationship with the people they were helping.

The charity has come a long way in the past 20 years — expanding to 19 different countries in Latin America and the Caribbean. TECHO volunteers often are the first to help after natural disasters like the earthquake in Peru in 2007 and in Haiti and Chile in 2010.

But, at their 20-year anniversary celebrations, Gonzalo Rodriguez, social director of TECHO–CHILE, said much remains to be done. Every year thousands of immigrants are choosing to make Chile their home, and this is leading to more problems with housing. The cost of living is going up and minimum wages remain the same. He said 30,000 families lack access to basic services like running water, electricity and sewage.