Immigrant communities abounding in U.S. and hoping to prosper 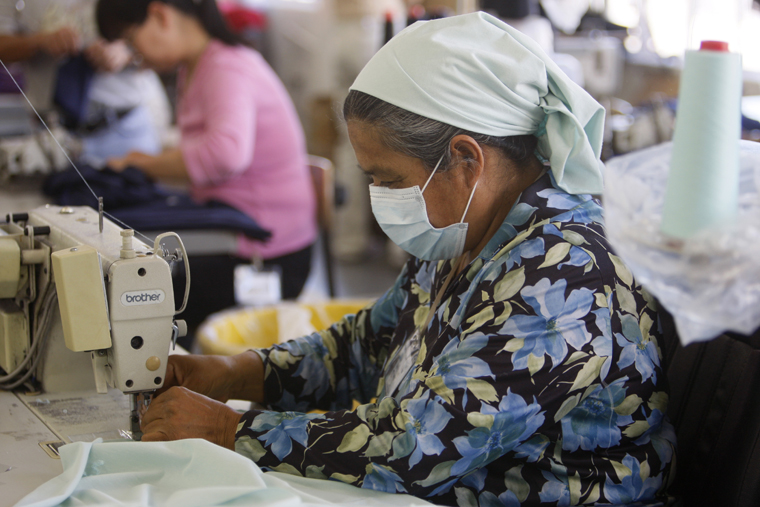 WASHINGTON (CNS) — One doesn’t have to look at cable news to know there are millions of immigrants living in the United States. Most of the focus lately, though, has been at the U.S.-Mexico border.

What’s taking place outside the constant scrutiny of news cameras and commentators is the number of immigrant communities already well-established in the country.

Like generations of immigrants before them, they are looking to make better lives for themselves and their families. And that’s where the Catholic Campaign for Human Development comes in. These are “people are all over the country, integrated into their communities,” said Ian Mitchell, a CCHD grants specialist, during an April 24 interview with Catholic News Service.

While some in the political sphere portray migrants and refugees as people to fear, Mitchell said Pope Francis sees them as “a gift to us.”

It has been an ongoing theme for Pope Francis. In January 2014, less than a year into his pontificate, he said, “Migrants do not only represent a problem to be solved, but are brothers and sisters to be welcomed, respected and loved. They are an occasion that providence gives us to help build a more just society, a more perfect democracy, a more united country.”

In Buffalo, New York, organizing has been the prime focus of the Buffalo Immigrant Leadership Team, or BILT. New York’s second largest city, Buffalo has been a choice spot for refugees from a variety of countries, according to the group’s lead organizer, Brian Zralek.

Between 2003 and 2017, 15,000 refugees have resettled in Buffalo, “and I’m sure that number’s grown,” Zralek said. Just some of the countries the refugees hail from include Myanmar, Congo, Bhutan, Iraq, Syria, Bangladesh and Rwanda.

So many people have resettled from so many different places that 83 different languages are now spoken by children in Buffalo’s public school system. Meanwhile, the school district has just 50 English as a Second Language teachers — and all of them specialize in Spanish.

While the refugee influx had led to a reversal of Buffalo’s population drop, “our infrastructure — that means schools, and that means job pathways and the status of our housing — leaves a lot to be desired for those primed to lead their new lives, start their lives over,” Zralek said.

The adults have “become homeowners, full-time employees, students, taxpayers,” he added. And through BILT, they have been able to build a critical mass to get the school system to seek more teachers who specialize in the languages the city’s students need, Zralek said.

In Sunset Park, a heavily Hispanic district of Brooklyn, New York, the Center for Family Life — while not a CCHD grantee — has spawned two worker-owned cooperatives that have received CCHD funds dating back to 2015. One co-op is for nannies, and the other is for elder-care home health aides.

“I can speak to what I’ve seen,” said Maru Bautista, director of the center’s cooperative development program. “The two cooperatives were able to do a lot of things that they couldn’t do before. On one end, they were able to professionalize all their backup systems by having a very robust database, and that was really able to help them get to the next level. And they really invested in their website so they could attract more clients.”

The cooperative structure has allowed the workers to “transition from a service delivery model to a partnership model,” Bautista told CNS. “We provide consultation training so they can start their own businesses with members of the community. So they became the owners.”

Funding allowed the home health aide cooperative to sponsor a training session locally — and in Spanish — rather than chartering buses and vans for a drive well outside of Brooklyn for English-language training, Bautista said.

“The latest grant that the CCHD has given to the cooperatives is with Alianza. They are a network of worker cooperatives here in the community doing a lot of work for advocacy for workers’ rights and immigration, and supporting worker-owned businesses in the community,” Bautista said. “They’ve been able to do so much with funding from CCHD.”

Another cooperative funded in part by grants from CCHD — which is the U.S. bishops’ domestic anti-poverty program — is TeamWorks Cleaning in San Jose, California, founded in 2004 and two years later adopting a shared-ownership model in which all 16 workers are shared owners.

“Everyone at TeamWorks Cleaning is a member-owner. We continually challenge ourselves to learn new skills that support broad participation in running the business. We are able to provide ourselves with fair pay, health insurance, disability insurance, paid time off, year-end profit sharing, and a community that supports our learning as people and professionals,” its website said. “We are also active in the international cooperative movement and other efforts to advance democratic values and social justice in our society.”

Walter Vicente, a co-owner, plant manager and production manager at Opportunity Threads, learned how to sew at age 9 watching his teenage brother sew in their Guatemalan home four hours from Guatemala City, the capital. In a year, he told CNS, he would himself sew after school.

His mother died when Vicente was 13. A year later, knowing his father needed more income to support the family, he left Guatemala to join his sister in Los Angeles. He went to school but found a part-time job at age 16 at a sewing factory. In 2000, Vicente moved to Morganton, North Carolina, where a brother lived, and got a job at a chicken processing plant. But pay was low and he had a growing family — a wife and, now, four children — so he took extra jobs.

Cashiering at one job, a customer told Vicente about Opportunity Threads. “I could not believe there was a sewing factory over here” in North Carolina, he remarked. He got a job there in 2011 and, after rejecting offers three times, finally accepted a “pre-member” position.

“That’s one of the best decisions that I made,” he told CNS April 26 — a scheduled day off. “My whole life changed in terms of benefits, in terms of what I make — money. I didn’t need two or three jobs — now I only have one. I have more time to spend with my family, with my kids, because Opportunity Threads has given me an opportunity to become an owner. That’s something you can’t find anywhere else.”

Vicente is now one of eight full members of the co-op, and there are 26 pre-members, he said. Opportunity Threads has used CCHD funds to modernize its machinery; one of its specialties is taking used T-shirts, cutting out the images adorned on them, and turning them into blankets.

Despite being in the United States for 20 years, Vicente’s homeland is never far from his mind, especially given the spate of news coverage on immigration. “We launched a scholarship in January to help those kids (in Guatemala) not leave school, to stay in school, paying 100 percent of their (tuition) so they could stay in school. We have five scholarships now,” he said, with a desire to add more next year.