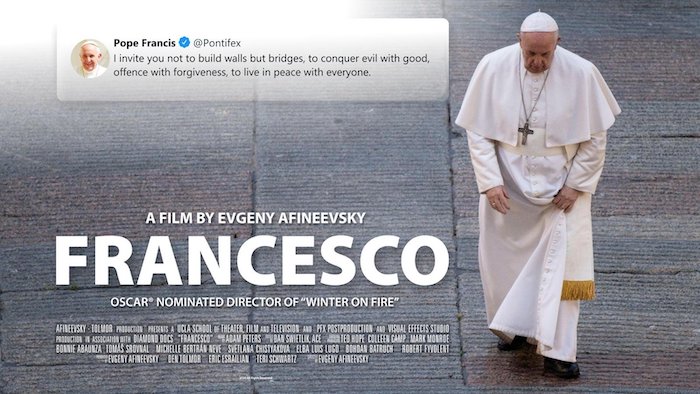 Saying that gay people “are children of God” who deserve their family’s love and the care of the church, Pope Francis in a new documentary expresses support for legalizing civil unions.

“Homosexual people have a right to be in a family. They are children of God and have a right to a family. Nobody should be thrown out or be made miserable over it,” the pope, speaking in Spanish, says in the film, Catholic News Service reported. “What we have to create is a civil union law. That way they are legally covered.”

The pope’s comments are similar to the position he took while archbishop of Buenos Aires and echo remarks he has made in several interviews during his pontificate, the same news service report explained: “Marriage” is only between a man and a woman, but civil union laws could provide legal protection for couples in long-term, committed relationships.

The comments, seen as his strongest public remarks on the topic since he was elected pope in 2013, come in Evgeny Afineevsky’s documentary “Francesco,” which debuted at the virtual Rome Film Festival Oct. 21. The film will debut in North America at the Savannah Film Festival Oct. 25. Afineevsky did two sit-down interviews with Pope Francis, although he used only a few clips from those encounters.

“This is the first time as pope he’s making such a clear statement,” Jesuit Father James Martin, a prominent Jesuit who has advocated for the church to more openly welcome LGBT members, told The Washington Post Oct. 21. “I think it’s a big step forward. In the past, even civil unions were frowned upon in many quarters of the church. He is putting his weight behind legal recognition of same-sex civil unions.”

Father Martin has visited Syracuse several times. He is scheduled to deliver a talk on his book “Building a Bridge: How the Catholic Church and the LGBT Community Can Enter Into a Relationship of Respect, Compassion, and Sensitivity” during a Nov. 4 livestream with All Saints Church. The Syracuse parish will award Father Martin its Fr. Mychal Judge Award.

Homosexual acts are “intrinsically disordered” and “contrary to the natural law,” according to the Catechism of the Catholic Church (Nos. 2357-59). The same section of the Catechism says homosexual people “must be accepted with respect, compassion, and sensitivity. Every sign of unjust discrimination in their regard should be avoided.”

In 2003, the Congregation for the Doctrine of the Faith issued a document urging Catholics to oppose giving “legal recognition to unions between homosexual persons,” particularly when such recognition would equate the unions with marriage and would allow the couple to adopt children.

Sixty-one percent of American Catholics support same-sex marriage, a significant shift from 2001 when 40 percent of Catholics expressed support for the issue, according to a 2019 Pew Research Center survey.

Catholic News Service called Afineevsky’s movie “an allegory to illustrate the main points of Pope Francis’ new encyclical, ‘Fratelli Tutti, on Fraternity and Social Friendship.’” The film also illustrates “the power of seeing each person as a brother or sister and listening to, learning from, respecting that person and extending a helping hand.”

The director told the news service he sees Pope Francis “as an amazing, humble human being who is a perfect role model for older and for younger people” at a time when “we have lost a moral compass.”

In the movie, released two weeks ahead of the U.S. presidential election, the pope criticizes the Trump administration’s policy on separating families trying to enter the United States illegally, the Jesuit magazine America reported.

“It’s cruelty, and separating kids from parents goes against natural rights,” the pope says in the film, according to the same report. “It’s something a Christian cannot do.”

“As the tragic coronavirus pandemic has taught us, we have failed to care for the earth, our garden-home,” Pope Francis says in a clip posted on the movie’s website. “We have polluted it. We have despoiled it, endangering our very lives.”

The film includes an image of a Minneapolis police officer kneeling on George Floyd, a black man whose killing in May spurred worldwide protests calling for racial equality and an end to police brutality.

Images of protests, refugees, and disasters also appear as the pope speaks. “Humanity is experiencing a crisis that is not only economic and financial,” he says. “It is also ecological, educational, moral, human.”

The clip includes a light moment, too. “Is it inappropriate for the pope to say this? I don’t know,” Pope Francis says. “I love you very much.”