In the end, everyone faces God with ’empty hands,’ pope says 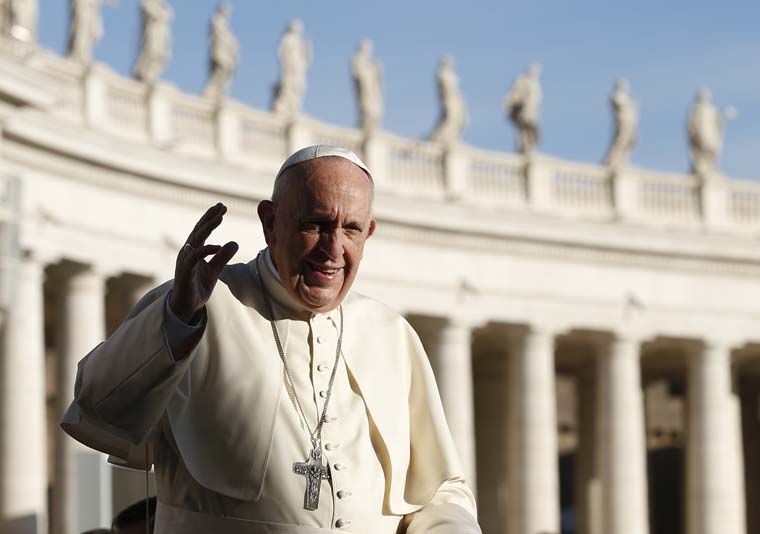 VATICAN CITY (CNS) — God waits for everyone, even the worst sinner who repents only with his dying breath, Pope Francis said.

“Before God, we present ourselves with empty hands,” he said, meaning that all the good works people have or haven’t done throughout their lives aren’t measured to determine entry into heaven.

“A word of humble repentance was enough to touch Jesus’ heart” and to make him promise eternal life in heaven even to a poor criminal, he said Oct. 25 during his weekly general audience in St. Peter’s Square.

The pope announced the day’s catechesis would be the last in his series of audience talks on Christian hope, adding that the last talk, therefore, would look at hope’s final fulfillment in heaven.

A curious fact, he said, is that the word “paradise” appears just once in the Gospels; it is used when Jesus from the cross promises the thief executed with him that “today you will be with me in paradise.” The “good thief,” the pope said, had the courage to recognize his sins and humbly ask Jesus, “Remember me when you come into your kingdom.”

“It is there, on Calvary, that Jesus has his last encounter with a sinner, to open to him, too, the gates to his kingdom,” the pope said.

The good thief had done no good works in his life and had nothing to show Jesus that he had earned or was worthy of heaven, he said. “He had nothing, but he trusted in Jesus, whom he recognized as someone innocent, good, so different from himself.”

The “good thief reminds us of our true condition before God: that we are his children, that he feels compassion for us,” that he can’t resist “every time we show him we are homesick for his love.”

The miracle of forgiveness is repeated continually, especially in hospital rooms and prison cells, the pope said, because “there is no person, no matter how badly he has lived, who is left with only desperation and is denied grace.”

“God is father and he awaits our return up to the last moment,” he said, just like the father of the prodigal son did.

“Paradise is not a fairy tale or an enchanted garden,” the pope said “Paradise is the embrace of God, infinite love, and we enter thanks to Jesus who died on the cross for us.”

“Wherever Jesus is, there is mercy and happiness; without him, it is cold and dark,” he said.

Jesus “wants to lead us to the most beautiful place in existence, and he wants to bring us there with the little or immense good that has been in our life, because nothing is lost in that which he has already redeemed,” the pope said.

Death does not frighten those who have put their trust in God, he said, because they trust in his promise and infinite mercy. They know Jesus died on the cross to redeem everyone’s sins, mistakes and failings and to bring all of his children with him to the house of the father.