In Utica, all adore Grady’s Way 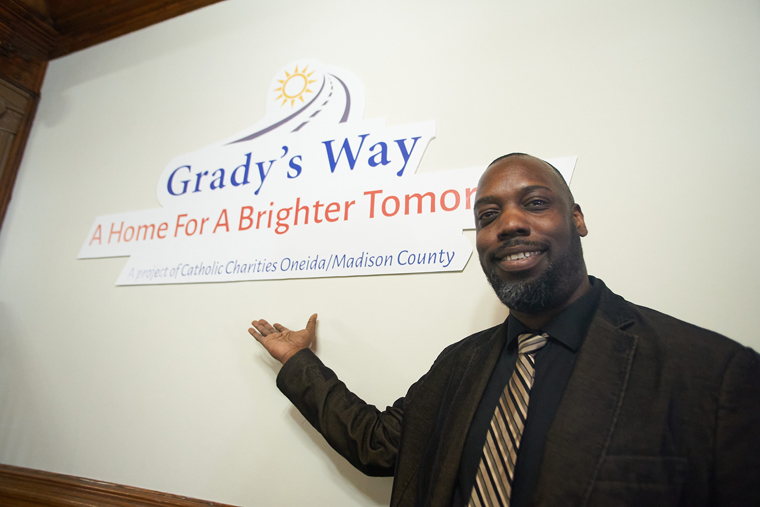 The front door’s leaded-glass sunburst transom signals the “brighter tomorrow” that will transpire inside.

Grady’s Way, where boys and young men who have endured tough times will get a fresh start, held its “Grand Welcome & Ribbon Cutting” on Jan. 21 in Utica.

People buzzed around the three-story red-brick structure with stone base for several hours, popping into the renovated rooms to check out the attractive paint job, the new windows, the bedding and colorful blankets, the plush furniture and sparkling kitchen, and even the ladder leading to a tiny landing on the third floor.

“Have you seen the place?” the home’s eponymous founder, Grady L. Faulkner Jr., said to a visitor. “From what it was, this is paradise.”

There are so many improvements in the house, built around the beginning of the 20th century, that the architect touring the place, Chuck Tomaselli of Utica, was occasionally surprised by his own designs. He described the house as a version of Dutch architecture with a gambrel roof, similar to a barn roof with four sections instead of two.

Tomaselli worked to accommodate the project’s “wishes and dreams.”

Features of the renovation include a rear-entrance portico with a security system, glass-block windows, and Ionic columns patterned after the columns inside the house; repaired chimneys; exquisite mullioned windows; new outlets; a new elevator accessible to people with disabilities; and “a great little thing”: a restored bathroom under the stairs, with a marble floor and repurposed and reconditioned cabinetry.

“I really get moved by the fact that the work we do is going to make a difference,” said architect Tomaselli.

That is the whole point for the Utica City School District worker the home is named for. Faulkner stood on the staircase amid the mahogany paneling, the Ionic columns, and the Grand Welcome balloons and told the crowd that this day was “the most exciting moment” of his life.

Another big day for him will be Feb. 17, when the home admits its first residents, who will be referred by the school district, the county, the courts, and other agencies — “finding those homeless people that need a place to stay.”

“For example,” Faulkner said, “there’s a young man right now living in his car just waiting for us to open.”

He said a private donor supplied $500,000 in seed money for Grady’s Way at 1404 Genesee St.; Catholic Charities of Oneida/Madison County donated the house.

• $2.3 million in renovation money from the New York State Homeless Housing Assistance Program, including the creation of three apartments on the third floor; previously it was an attic for the most part.

• $75,000 annually for five years from the Empire State Supportive Housing Initiative, to offset the cost of the third-floor apartments and to pay for support staff and maintenance.

• $120,000 annually from the state Solutions to End Homelessness Program, for operating costs, staff, and programming.

• $250,000 from the Community Foundation of Herkimer & Oneida Counties; part goes to furnishing the building and the remainder to operating expenses.

Grady’s Way offers an 11-bed emergency homeless shelter for boys ages 12-17. The staff will make sure they are in school or at least have a job. The residents will rebuild their lives and take pride in what they have, Faulkner said. Also, three permanent supported apartments on the third floor will shelter young men ages 18-25. They will learn to live on their own and pay their bills.

The younger boys can stay for 60 to 90 days, Faulkner said, and the older gentlemen, until they are 25.

Catholic Charities says Grady’s Way will do the following:

• Offer supervised activities; mentoring in topics such as job readiness; and counseling to high-risk young men.

He said the problem of homeless youth in the greater Utica area is greater than people realize. He envisions Grady’s Way getting young people off the streets, providing supervision for them, grounding them in new possibilities for their lives, and giving them hope and the skills they will need to be able to live on their own.

Another attendee said Faulkner is an excellent singer, although he didn’t sing during the open house. The music that played in the background was offered by DJ-for-the-day Lou DeAngelis, the assistant finance director for Catholic Charities. In honor of one of the seniors in attendance, he played Louis Armstrong singing “What a Wonderful World.”

Of the home’s eponymous planner, Father Salerno said that if you get to meet Grady and know Grady, you love Grady.

Grand Welcome attendee Lisa Jenkins has known Faulkner, who is now a parent/community liaison for the school district, since her two daughters were in elementary school. She would pick up her kids every day and chat with him. Today, her daughter Ciera is a nurse in Utica, and her daughter Carrie attends Herkimer Community College; she will start pharmacy school in the fall.

‘From night to day’

“He was very great with the kids,” Jenkins said, “and I like him about that part. … Fun and witty person. … Everybody loves him. If you don’t love him, I don’t know, something is wrong with you.”

Of the renovated Grady’s Way building, Jenkins said: “It’s really nice. It was just an old building that had been here for years, and I said to myself: Oh my, it went from night to day. It’s beautiful.”

Faulkner can’t stand the idea of hearing stories of need and not acting on them.

A little over 13 years ago, a great local football player told Faulkner that during the football season, friends and family members would let him stay at their house.

“He said they love me [when] football is going on,” Faulkner said, “but after football is over nobody wants to be around me.

“He’s sleeping with friends all over the place, getting kicked out, and at that point I said forget it. I’m going to do whatever I have to do” to develop a shelter.

So Faulkner contacted a woman who had emailed him; she had seed money waiting for him in a trust, and she donated the first half-million dollars toward Grady’s Way.

He put his advisory team in place, polished the business plan, and went out and shopped it around to different organizations. “Honestly,” he said, “we had a lot of people say no.” But he said the rejections made him stronger.

Just four years ago, he met Catholic Charities’ Cavanaugh. “I talked to her about it and she said yes,” Faulkner said. “She said she would be happy to talk to her board about it, and within a four-year span we are open.”

In his view, Catholic Charities took his great idea and knew how to work the business part of it.

“I believe that because of perseverance and focus,” Faulkner said, “this day was bound to happen.”

He had faith it was inevitable?

“Yes. It was bound to happen. I was not going to rest my head another night without this happening.”

Faulkner rides his bike around town, and it will get a workout. He gets up at 6 a.m. and starts his day job for the school district at 7 a.m. After Grady’s Way opens Feb. 17, he intends to be over there 3-8 p.m. in his role as part-time employee of Catholic Charities — founder and youth/family service coordinator of Grady’s Way.

On opening day, he said, “I will be here with all the staff to greet everyone who is arriving to live here. They can come here during the day, they can come here at night, at 2 a.m. If state troopers are bringing kids in, or if they’re doing emergency placement, we will be here.”

Joniquia Robinson, the residence manager at Grady’s Way, said there will be several part-time and full-time workers.

Asked how she will approach the job, she said: “I’m not a drill sergeant. “I’m going to be a nice smiling face, somebody comforting they can rely on.”

A visitor broached this question: Does it go to his head to have the place named for him?

“Ha-ha, no,” Faulkner said. “I’m the humblest guy you will ever meet. It wasn’t going to be my name when I first started this, but my committee and whole team decided it had to be.”

He still has goals; Grady’s Way is maybe 15 percent of what he wants to accomplish.

The private donor of $500,000 has 80 acres of land that she has pretty much lent to him. He is looking to raise money so that kids from Grady’s Way can have a hydroponics operation on the land in Cassville, in the Sauquoit area of Oneida County.

The kids could plant their own vegetables and offer fresh produce in the summer months.

“We are also going to be doing work with the Freedom Dogs,” Faulkner said, “puppies, that are going to help [people who are blind] and veterans; we have a lot of other things.

“This is just a blueprint of what we’re going to do. This is Phase 1.”

On the day of the Grand Welcome, he received a card from the private donor It reads:

“Grady, you are amazing! Thank you for being you! Good luck, when are we starting the program [at] a second site?”

Jenkins, the woman who knows him from the time her two daughters were in elementary school, said she prays for Faulkner.

“I used to see him,” she said. “I would say: You know, he’s a good person. I was like: God will bless him one day, and God is blessing him.”