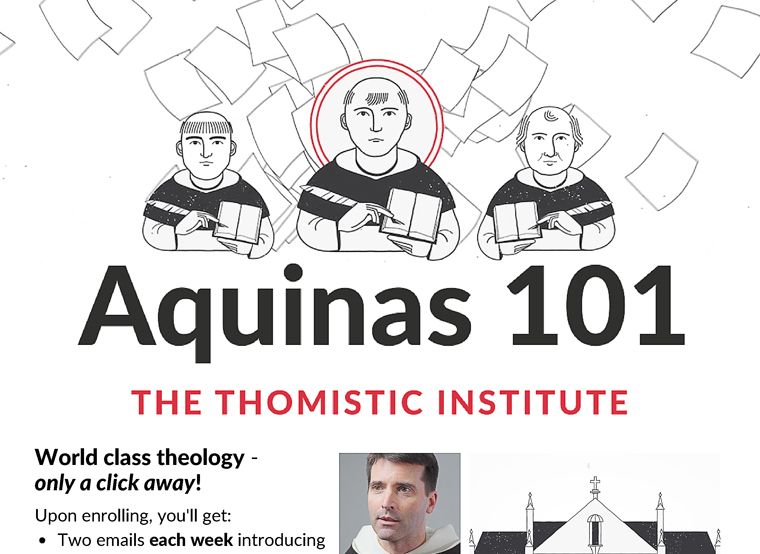 WASHINGTON (CNS) — The Thomistic Institute in Washington has launched “Aquinas 101,” a free online video course that instructs interested viewers in the thought of St. Thomas Aquinas.

“Aquinas 101” will consist of 85 to 90 videos released over the course of the year. The series will introduce the basics of the Catholic intellectual tradition with St. Thomas Aquinas as a guide. The first three videos can now be viewed on aquinas101.com or on YouTube.com.

The videos in the course each feature a Dominican friar/professor and are animated to illustrate the doctrines described. The priests featured include Fathers Dominic Legge, Thomas Joseph White, Thomas Petri, James Brent and Gregory Pine.

The course proceeds through an introduction to St. Thomas, a basic description of his philosophy and an in-depth study of his masterwork: “Summa Theologiae.”

“At the end of the course, the viewer can expect to have gained a basic mastery of the essentials of Aquinas and to have acquired the tools to engage many difficult issues of faith and science, reason and revelation, and beyond,” said a news release from the Thomistic Institute announcing the course.

By enrolling in the free video course, subscribers also will have access to selected readings, recommended podcasts and further resources.

This series is funded in part by a grant titled “Growing the Conversation on Science and Faith” from the John Templeton Foundation.

The Thomistic Institute was founded 10 years ago and seeks to promote Catholic truth in the contemporary world by strengthening the intellectual formation of Christians especially at top-tier universities.

Using Thomas Aquinas as its touchstone, the institute has over 50 student chapters at schools such as Harvard, Yale, New York and Duke universities and the Massachusetts Institute of Technology. It also sponsors chapters internationally in Dublin, London and Rome.

These student chapters organize lectures by Catholic academics who speak on everything from law and bioethics to art and philosophy. The lecture recordings are then added to the Thomistic Institute’s SoundCloud account where more than 550 lectures from its ever-expanding library can be accessed for free.