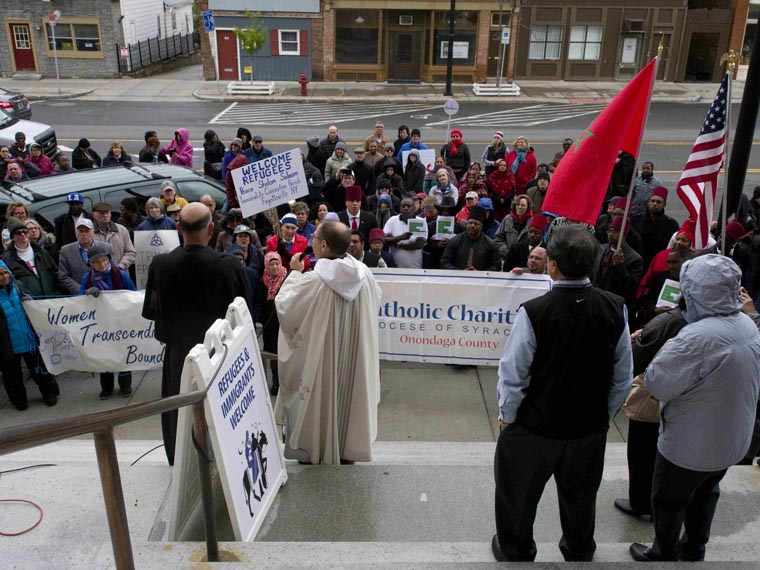 Cousins Hassam Jassim and Ammar Mahmood grew up together in Iraq and came to Syracuse more than five years ago. On Sunday, the two carried a Catholic Charities banner as they led a procession of more than 250 people on a 90-minute walk on Syracuse’s North Side.

“It’s good for people to be walking with refugees,” said Mahmood, who works as an Arabic translator with Catholic Charities. “Refugees are not terrorists. They are suffering from a war. They just want to come here and start a new life and feel safe.”

Catholic Charities partnered with InterFaith Works to host Sunday’s interreligious procession in solidarity with refugees. The Syracuse agencies, both of which resettle refugees, planned the event to show friendship and support to refugees, many of whom have felt targeted by President Trump’s U.S. immigration policies. In a Feb. 5 Mass in Solidarity with Refugees and Exiles, Bishop Robert J. Cunningham said “blanket refusal to allow immigrants from a given nation, ethnic or religious group to enter our country is un-American and un-Christian.”

“For many people it was so scary,” Mahmood said of Trump’s executive orders barring immigration to the United States for at least 90 days while officials reviewed the visa process. Although the travel bans are blocked as they undergo court challenges, many refugees remain worried they could be deported, Mahmood and Jassim said.

Mahmood translated for Jassim, who said his wife and daughter are in Egypt. Both miss relatives they haven’t seen in years. “His father is dying,” Mahmood said of his cousin. “He can’t get him here and he can’t get back to see them.”

Celia Mulvey was among six members of Immaculate Conception Church in Fayetteville who participated in the walk to support people like the Iraqi cousins. “I believe we ought to be more open to refugees,” she said. “We are all refugees of some sort.”

She’s distressed by federal policies that appear to target people based on ethnicity or religion.

“We’ve done it before with the Jews and interring the Japanese,” she said. “We have to grow and be better than that.”

In addition to several Catholic parishes, walkers carried signs that identified them as being from the Zen Center of Syracuse, the Quakers, the Syracuse Nepali Church, and others. The walk took place in a neighborhood home to two parishes founded to serve German Catholics (Assumption and Holy Trinity) and two founded to serve Italian Catholics (Our Lady of Pompei and St. Peter’s).

On nearby State Street was St. John the Evangelist Church, built in the 1850s to serve Irish immigrants. By the late 1970s, the parish became home to Southeast Asian refugees, mostly from Vietnam.

The quiet walk lasted about 90 minutes amid intermittent light rain. At each stop, a representative of the faith community at the site led a prayer.

At the Franciscan Church of the Assumption, Friars Rick Riccioli and Gerry Waterman led one of the most familiar Christian prayers: the Prayer of St. Francis.  “Everyone here is always welcome here,” Friar Riccioli said, noting that Franciscans have an 800-plus-year tradition of welcoming people and encouraging interfaith dialogue.

Assumption was founded in 1845 to serve German immigrants. Now, “It’s very diverse,”  Father Riccioli said. A sign on the church’s front steps features a drawing of Mary, Joseph, and Jesus, and reads “Refugees & Immigrants Welcome.” The sign is a reminder that “Jesus was a refugee,” he said.

The church must welcome and respect its diverse neighbors, he said. “Refugees are not a liability,” he said. “It’s a great gift. It’s our moral duty to welcome them.”

Renée K. Gadoua is a freelance writer and editor who lives in Manlius. Follow her on Twitter @ReneeKGadoua