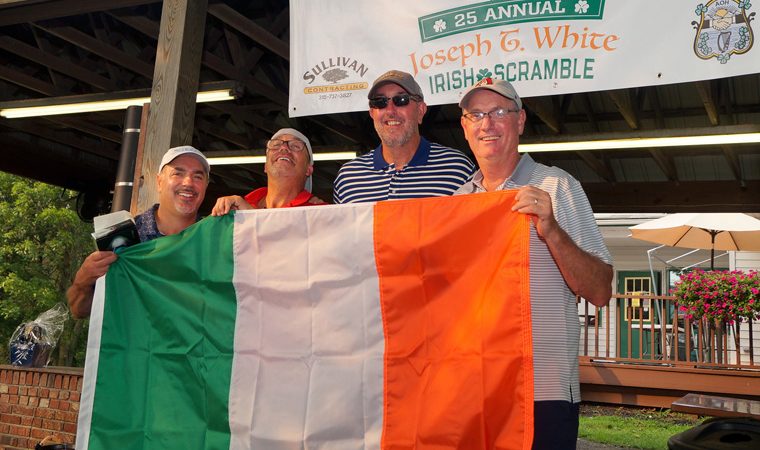 There were lots of winners at the 25h annual Joe T. White Irish Scramble at Hidden Valley Golf Club — and they weren’t just the players.

The “Mike Durr and Friends” team of Mike DeCicco, Kevin Edic, Kevin Grimmer, and Mike Durr was the overall champion in Whitesboro. In a golf “scramble,” each team member hits a tee shot and then the whole team hits from the spot of the best shot.

Everyone who sat down to the chicken dinner put in front of them by the operators of Hidden Valley was a winner. Certainly, no one went away from that feast hungry.

But the biggest winners of all were folks in Central New York who are well acquainted with not sitting down at a luxurious repast; they’re the golfers’ brothers and sisters in the family of God who are uncertain of their ability to obtain nutritious food.

The Oneida County Division of the Ancient Order of Hibernians, named after a 19th-century Utica civic leader and activist for Catholics and the Irish, John C. Devereux, raised $3,500 for distribution to Central New York food pantries with the event, the most bountiful in its history. The sponsors were the AOH, CARite, the Five-Points Pub, and Sullivan Contracting.

Earlier in the year, the AOH Oneida County joined other Irish interests in firing a 17-ton food salvo against the enemy — hunger — in a distribution at the Irish Cultural Center in Utica.