‘It goes fast’: Msgr. Richard Kopp reflects on mentors and memories as he retires following three decades of diocesan ministry 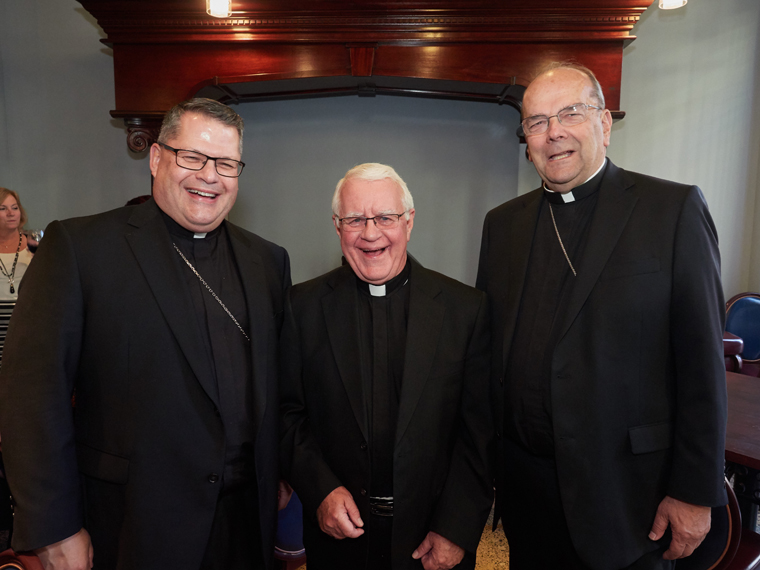 It was Bishop Frank J. Harrison who first got Msgr. Richard Kopp into a chancery office, back in 1977.

Father Kopp was then an assistant pastor at St. James Church in Syracuse, where then-Auxiliary Bishop Harrison was the pastor. Once Bishop Harrison received word that he was to succeed Bishop David F. Cunningham as ordinary of the diocese, however, he began dropping hints to the young assistant priest about coming into the office.

“Of course, I knew what he was driving at,” Msgr. Kopp recalled in a recent interview with the Sun. “So I began the defense.”

But those 19 years were just Msgr. Kopp’s first stint in chancery service; he would later return for 11 more. And after serving seven bishops over more than 50 years of priesthood, he closed out a total of 30 years of diocesan ministry at the end of September.

In the final days of that tenure, looking toward a well-deserved retirement, he told the Sun, “It goes fast.”

Msgr. Kopp celebrated the 50th anniversary of his ordination in May. Fittingly, it was an ordination that got him thinking about his own call to the priesthood all those years ago.

Actually, it was a religious sister who set him on the path during his junior year at St. Vincent High School in Syracuse. One of his teachers, a Josephite sister, had a ticket to the upcoming ordination at the Cathedral of the Immaculate Conception.

“She pulled me aside and said, ‘I want you to go to this ordination,’” Msgr. Kopp recalled. “It was a Saturday morning, 9 a.m., and I was going to a dance Friday night. And back then, parents didn’t shuttle you around in the car; you had to take the bus if you wanted to come downtown….

“I did not want to go. We went back and forth, back and forth on it and she said, ‘These tickets are limited and I am giving it to you and I want you to be there. If you don’t show up you’re taking a ticket away from somebody else.’”

Dutifully, the young student went. “I was way in the back and I watched this whole ceremony — the first time I ever saw an ordination,” he said. Afterward, the newly ordained priests “were blessing the people…. I sat in the back of the cathedral and I looked at that and I said, ‘You know, I might want to do that.’”

He went back to St. Vincent’s and spoke to the associate pastor, Father Charles Fahey.

“The big crisis was that I had not taken any Latin in high school,” Msgr. Kopp laughed. He went through a summer school program and then on to seminary at St. Jerome’s College in Kitchener, Ontario, after graduation — where he spent his first year in an intensive Latin course five days a week.

“I’ve often said that by the time I was ordained, I’d have been better off if I studied guitar [rather] than Latin, because when I got out, it was all these guitar Masses…. and Latin was gone!” he joked.

After St. Jerome’s, it was four years of major seminary study at Christ the King Seminary on the campus of St. Bonaventure.

The summer of Msgr. Kopp’s deacon year was spent at the Cathedral of the Immaculate Conception in Syracuse.

“That was the first place I preached,” he recalled. Msgr. Joseph Champlin served the summer there as well and “he gave me a lot of time, kind of mentored me about a gazillion things…. It was a great time,” with lots of laughs.

Msgr. Kopp was ordained May 17, 1969, and assigned to Holy Family Church in Fairmount. For five of his six years there, he served under another great mentor, Msgr. James McCloskey.

Being at Holy Family “back in the time when a lot of things were being implemented from Vatican II” was a great experience, he said, and he praised Msgr. McCloskey for his “vision and foresight” in bringing in national speakers to address the parish.

In 1975 came his fateful assignment to St. James and in 1977, his first chancery assignment: assistant chancellor. The job provided a “potpourri of experiences,” Msgr. Kopp said, from taking dictation for Bishop Harrison to assisting the chancellor, then Msgr. J. Robert Yeazel, with administrative matters.

Msgr. Yeazel gave him an important piece of advice right from the start, Msgr. Kopp said: “The main thing when you’re working in this office is to always be kind.”

When Msgr. Yeazel became pastor of Immaculate Conception Church in Fayetteville, Msgr. Kopp and Father David Barry were named co-chancellors. “Dave handled the canonical stuff” and “I handled the business side of it,” Msgr. Kopp said, along with assistance from the diocese’s Chief Financial Officer.

But it wasn’t always nose to the grindstone in those days. “In addition to our duties as chancellors, both Dave and I were called upon to golf with Bishop Harrison,” Msgr. Kopp laughed. “Dave was a pretty big golfer; I was fair to middling…. One time, I’ll never forget, Dave and I were off the green, down into this gulley.” Bishop Harrison, up on the green, calls out: “‘What are you doing down there?’” Msgr. Kopp recalled. “I said to Dave, ‘Here’s the bishop’s brain trust, down here in the gulley!’”

As much as he enjoyed his work, though, Msgr. Kopp wanted to get back to parish ministry. He told himself he’d stay on for a year after Bishop Harrison retired, to help with the transition, and then apply for a parish assignment.

“Then Bishop [Joseph T. ] O’Keefe came,” he said. “Bishop O’Keefe and I were very close. We just clicked. He was just a prince of a guy.”

“One thing that really stands out in my mind: When [Bishop O’Keefe] was coming up to be installed [Aug. 3, 1987], I was the point person…. I thought I had it all together, but you never know.

“The morning comes and I come into the office early, and — I’ll never forget it — I stood at my desk and I took a big sigh and I just said to myself, ‘Take one thing at a time.’

“And with that, the phone rang and [Auxiliary] Bishop [Thomas J.] Costello had had a heart attack down at the Hotel Syracuse…. He went off to the hospital; O’Keefe, God bless him, he went down to see him on the stretcher before they loaded him into the ambulance.”

When Bishop James M. Moynihan began his tenure as bishop in 1995, Msgr. Kopp again set his sights on parish ministry. But first he helped the new bishop hire Danielle Cummings as director of communications, a position she still holds, along with that of chancellor.

“I was immediately impressed and, frankly, intimidated by his command of the operations of the chancery,” she told the Sun. “He was always on the go and seemed quite serious. As time went on, I had the privilege of getting to know him and admired how much he gave to the work of the Church. Our friendship grew and he had a way of making me laugh. Our phrase to each other was constantly: ‘You just can’t make this up!’”

Msgr. Kopp was appointed pastor of St. Mary of the Assumption Church in Baldwinsville in 1996, where he served the parish and its school, St. Mary’s Academy, for 12 happy years.

“I loved having a school,” he said, recalling the jokes and smiles as he greeted students on their way home in the afternoon. “They just really liven up the place.”

But after his term at St. Mary’s was up, the chancery came knocking once again, citing his expertise and historical knowledge as fine qualities for the Vicar for Priests.

“When I was chancellor, I would always say to myself, ‘The one job I don’t want is priest personnel director,’” Msgr. Kopp said with a chuckle.

“But I have to say my 11 years — it’s been a great growing experience for me because I’ve been able to come to a real understanding of some of the struggles that the priests have, the challenges that they meet day in and day out. But I’ve also come to appreciate the tremendous generosity of our priests…. In recent years a big part of my job is trying to find coverage [for Masses]…. through that whole process, I’m telling you, guys have responded very generously. It’s been a real inspiration for me.”

The hardest part of his role as Vicar for Priests has been “matching personalities to ministries,” he said. “I always say to guys, we certainly are looking for excellent ministerial efforts on the part of our priests, but a close second is that we want a happy priest. So if a guy is trudging along, doing something that doesn’t match with his personality, that’s a very difficult situation. It’s a challenge sometimes to make that connection for guys.”

The best part, though, has been “being in the mix. It’s challenging but it also keeps you on your toes, keeps you alert. I’ve always been in a situation where I’ve been heard. Most recently I think I’ve been heard the most that I ever have been. I always joked when I was chancellor, ‘I win some and I lose some, but I mostly lose some. That’s not been the case in these last 11 years.”

Carol Kay has worked as administrative assistant in the priest personnel office since 2016. In that time, “it has been an absolute joy to assist Msgr. Kopp in serving the Church. He is a wealth of knowledge, the epitome of a priest, and a wonderful regular guy with a great sense of humor. I have the utmost respect for him and for all he does for the diocese. On a daily basis, I have witnessed the grace of God, and learned the true meaning of forgiveness and servitude through his ministry.”

At 76, the time was right for Msgr. Kopp to hand over the reins; Father John Manno assumed the role of Vicar for Priests at the beginning of this month. But that doesn’t mean the monsignor is disappearing. He’ll continue to assist with weekend Masses at Blessed Sacrament and St. Vincent de Paul Churches in Syracuse, and with liturgies at Bishop Grimes Jr./Sr. High School.

And he’s keeping tabs on his former chancery colleagues:

“In the chancery, Mondays are frequently hot-button issue days,” Cummings said. “Returning from the weekend, people would often call the chancery with questions, concerns, or comments about what took place at their church over the weekend. Invariably, I would call him or he would pop down to discuss the latest concern and our conversation would always end with, ‘Well, it is Monday!’ At his retirement party, I told him that I expect a phone call every Monday. I am happy to report my phone rang yesterday and as if he never left, we shared a big laugh!”