It takes all kinds of men to truly be a Father 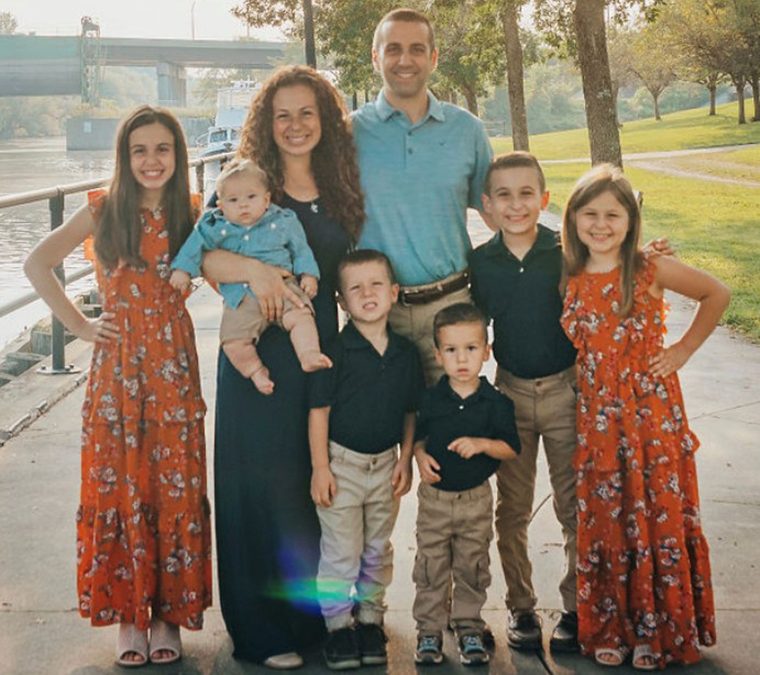 The vocation to ‘fatherhood’ comes in different shapes and sizes

They are the first words on our lips, when we pray alone, when we gather as a community and anytime we speak and listen to Our Father in heaven. We, the faithful, could thus make a strong argument that every day should be Father’s Day. So, as we prepare to celebrate the annual observance, when we especially honor all fathers, please consider these three paternal images that are reflections of “Abba”…the Father who is our divine “daddy,” who loves us beyond all that He has created and inspires mortal men to love as He does. 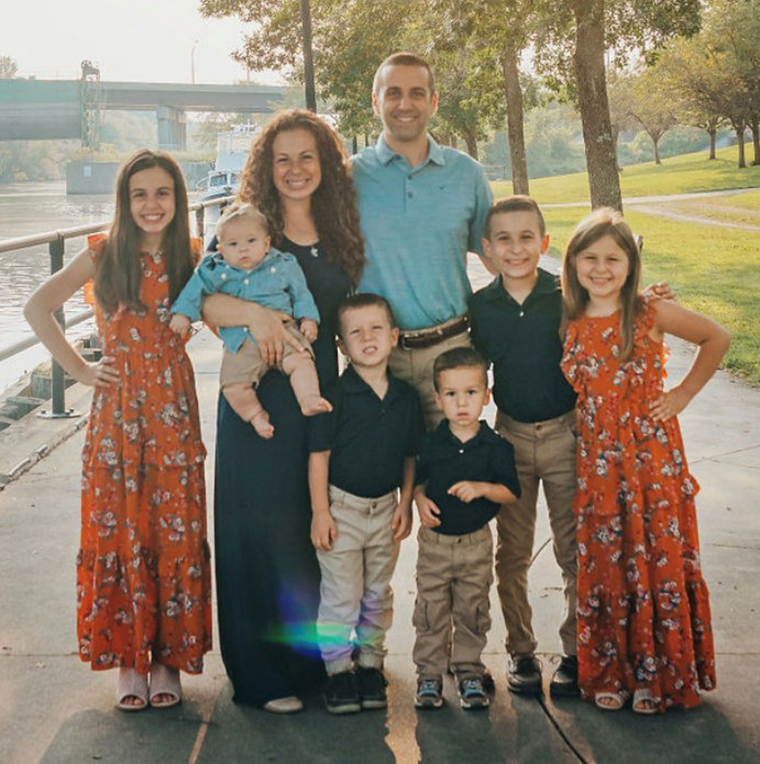 “Being a dad is really at the core of who I am,” explains Mark Ranieri, a parishioner of Holy Trinity Parish in Utica. If the name and the photo seem familiar, it is because Mark’s wife, Nina, was part of our Mother’s Day story in May. “When I first met Nina, we always joked. … She said, ‘Have you ever thought about having kids before?’ And I just kind of looked at her said ‘Uh, no, not really.’” Six children later, Mark shares that “the right woman can draw a man to greater heights and greater horizons than what he really considered. After meeting Nina, I decided I really wanted to have a family, with her … not just with anyone, with her” he adds with great emphasis.

Mark shares that “being a dad for the first time … is a whirlwind. Everything is new.” The first was daughter Olivia who is 12, followed by son Mark at 10, Juliana at 8, Dominic at 5, 3-year-old Francis and 14-month-old Salvatore. Son Vinny was lost to stillbirth at 39 weeks of pregnancy six years ago. Another miscarriage loss occurred between Francis and Salvatore.

Mark recalls a conversation with Father Phil Brockmeyer, a man who “had a big family” and whose wife passed away. Eventually, Father Phil heard the call that led him to the priesthood. Mark shares that, coming from a family of three children, he “had never known anyone with a big family.” He asked Father one day “How do you do that?” Father Brockmeyer responded that “where there is true love, there is always room for one more.” Mark says, “That has always stuck with me.”

Mark and Nina took a natural family planning course as part of their marriage preparation. “That unlocked my horizons on being open to life.”

Mark shares that “being a dad has made me a better person. It’s made me more in touch with God the Father. It’s made me more grateful for my own father and my grandfather.” Mark once had strong thoughts of pursuing a priestly vocation and says that his experience as a dad “has greatly benefited from the priests in my life, who have helped me and given me the example of a priesthood well lived.”

Being a role model of a well lived life vocation is a responsibility of a good parent and being a good godparent. In the Catholic faith, the correct term is “sponsor” as the Code of Canon Law spells out, one who “is to assist an adult in Christian initiation, or, together with the parents, to present an infant at the baptism, and who will help the baptized to lead a Christian life in harmony with baptism” (Canon 872). Often, parents might choose a godparent for their child primarily based on old friendships or family relations.

“It’s an honor, it’s a privilege,” says Anthony Colavita regarding being asked to be godparent, a role he has filled a number of times in his life. A member of Epiphany Parish in Liverpool, Colavita has also experienced some of the pain of parenthood through his baptismal sponsor obligation. The mother of one young boy he sponsored “became dependent on drugs …, the father had some other dependency issues,” he explains. The couple separated and their family split apart. An older child came to live with Anthony and his wife but the younger child, his godson, went to live with another family member.

“I struggled,” Anthony shares. He had a sense of failure as a godparent because the boy led a troubled life. “It was very difficult for me and our family to try to bring him back.” His godson had brushes with the law and wound up in the corrections system for a time. He is now working on rebuilding his life. Anthony continues to pray and to be present to his godson when he is in the area but does not see him as often as he would hope. He has taken comfort in the Gospel.

“The parable of the Prodigal Son, it’s one of my favorite parables,” he shares. A book by noted spiritual writer Henri Nouen, The Return of the Prodigal Son: A Story of Homecoming, “is absolutely amazing!” He notes that the book about this Gospel story explains God’s mercy, that “the father is always there to welcome the child home.” This is the message Anthony has relayed to his godson, that he “will always be here for you. If you need me, I’ll always be here. I will always be waiting for you and will help you with whatever you need.”

That is what true fathers do for the children they love. 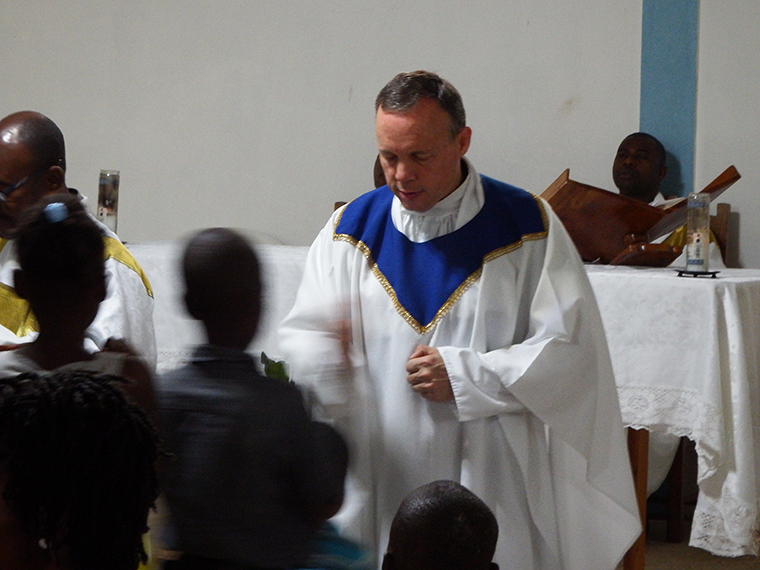 The Catholic Sun recently received an editorial submission, one written by Pete Ludden, a parishioner of Sacred Heart Church in Cicero. Mr. Ludden was moved to share his experience of his pastor, Father Richard Prior. His motivation came in a moment of personal sadness following the announcement that Father Prior would soon be moving on to a new assignment in the Southern Tier. Priests do that; these “Fathers” are called to periodically move from one parish home to another.

“Gasps and groans were released by many of us who were attending that Saturday evening vigil Mass,” Ludden writes, describing the reaction to Father Prior’s announcement that June 30 would be his last day in Cicero. “My mind suddenly was overwhelmed by emotion in reaction to those unexpected words,” Ludden adds. “Then, the memories came flooding in.”

Ludden’s story of his relationship with Father Prior began with a conversation just two weeks into his pastorship at Sacred Heart. That, too, was a sad moment concerning the failing health of another priest serving the parish. But in between the melancholy moments that framed his experience of Father Prior, Ludden shared his story of his friendship with a priest, a pastor, a shepherd, who was truly embracing the role of “Father” to his parish community.

Father Prior subtly invited Pete to join a prayer group. “My faith began to blossom as I participated in that prayer group,” Ludden writes. “As more opportunities to participate in church offerings arose, I added them to my activities.” That led to his involvement in two mission trips to Haiti.

Father got Pete involved as a server in funeral ministry and in helping with the parish youth group. “I happily joined, teaching students about my ongoing faith journey.” Written between the lines of Ludden’s story, though, is the subplot that Father Prior’s relationship with him is repeated many times over with the rest of his congregation.

Father Prior plays a role in everyone’s faith journey, just as a dad plays a role in the life of each child he is tasked by God to accompany. “As I walked out of church that Saturday evening, I waited for the opportunity to talk to Father Prior,” Ludden adds. “While waiting I had time to reflect on what he meant to me, how much he helped me.”

On this Father’s Day, take time to reflect on how all the “Fathers” in your life have helped you. Then, offer a prayer of thanksgiving for their presence in your life, all according to a divine plan. Begin that prayer with the words “In the name of the Father …”