It was the day the Channex went dark, but no one was hurt 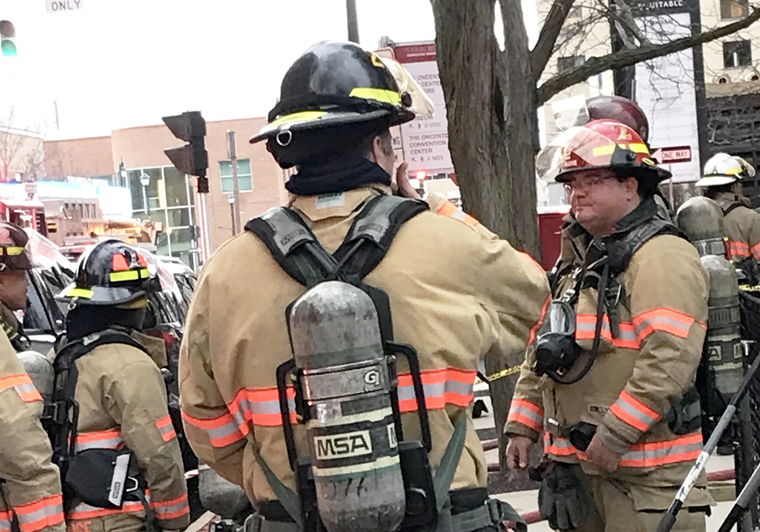 The day got a bit hazy—inside.

Habitually early to work, Jim O’Neill had already been at it a while when the lights went off in the Channex building on the Chancery campus in downtown Syracuse.

At about 8:15 or 8:20 a.m., a strobe show commenced in O’Neill’s office—the lights, his computer and his radio going off and on, and his phone flashing. He recalled: “The lights went off and the fire alarm went on—that’s when you could smell something [like plastic] burning. … We said, uh, something’s not exactly right here.”

O’Neill’s colleague Saundra Macidyn  said, “It was pretty scary because I knew it wasn’t a planned fire drill.” 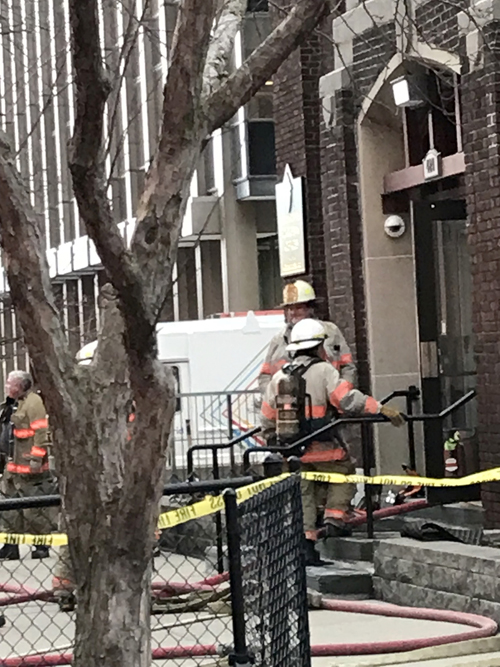 Firefighters are stationed at the front door of the Channex on Feb. 23 on Montgomery Street across from the Civic Center in downtown Syracuse. (Sun photo | Tom Maguire)

O’Neill called 911 and the dispatcher confirmed reception of a fire alarm at 424 Montgomery St. “As soon as I was connected with 911 I could hear the siren,” he said.

It seemed as if the smell was stronger coming up from the basement, and when he looked downstairs he saw a “little bit of a haze down there. That’s all I saw”—no flames.

The building went dark, and fearing that the fire may have cut power and locked the front door, O’Neill held it open so that the approximately 15 workers in the building could get out safely. “You could see there was smoke coming out of a manhole cover,” he said. All employees exited without injury and assembled across the street, just as they do in the two fire drills that are held each year. “Little chilly out there,” O’Neill said.

Power and the internet went down across the whole Chancery campus, which includes the former convent that serves as the residence of Bishop Emeritus Robert J. Cunningham.

Kory Hopkins, diocesan IT Director, said four off-campus facilities were also affected because departments on-campus could not serve them as they normally do.

Asked about the cause of the fire, Brian McAuliffe, diocesan Risk Management Director, said, “They never said for sure but it looks like there were some wires that were spliced together in one of the boxes when they added a new box to our building. … For some reason those overheated or arced or something and then that sent more heat back out into the street, so there was a lot of wires damaged outside of our building too.”

The electrical box is in the Channex basement below the stairs at the main entrance. It is where the power comes into the building. Wires running underground connect the Channex to  National Grid’s power source in the street.

Asked about repairs, McAuliffe said it only required National Grid to run new wires from inside the Channex out to the street.

IT Director Hopkins said power was restored by around 6 p.m. Thursday, Feb. 24; everything except the elevator was running smoothly Friday, Feb. 25.

Regarding cleanup, Risk Management Director McAuliffe said: “First the fire department used fans to evacuate the floors and open windows, opened up the roof vents, [got] everything moving as much as possible, and then [Director of Facilities Ed King] and his team brought in the air-filtration systems on the different floors, and then we had our cleaning company come in. They cleared the area where the fire had been, they mopped floors, they cleaned carpets, they wiped down walls, they did everything that they could, and that really made a difference in how quick the odor dissipated in that building.”

Diocesan officials considered it a great opportunity to say thank you to the city firefighters, National Grid (including Christopher Gorman), neighbors, employees and cleaners. Special thanks went to diocesan IT workers Hopkins, Justin Bartlett and Christopher Garrett.

Diocesan Chancellor Danielle Cummings emphasized that regular ongoing communications were sent during the outage. “For the greater public,” she said, “it was important for them to know that this campus was not accessible for phone and internet.”