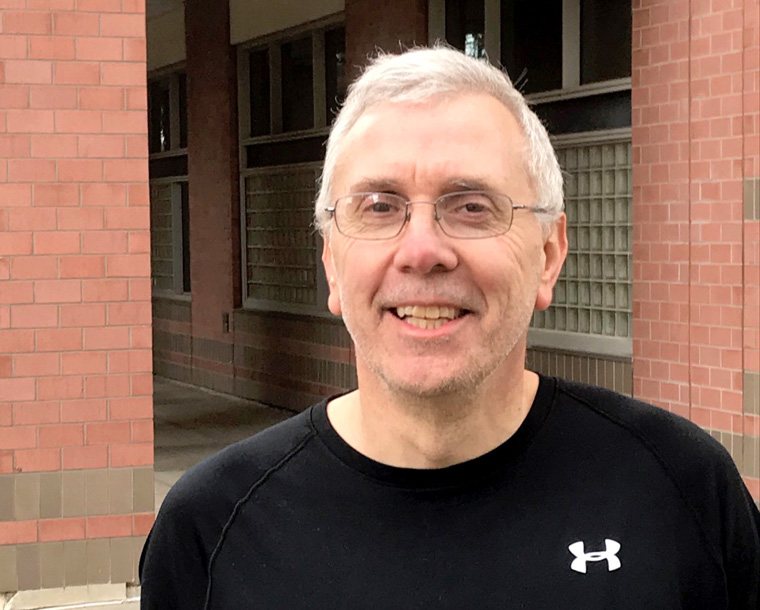 Some of the neighbors are waiting for you to write.

In a note to his volunteers who send cards and letters to inmates, Jail Ministry Director Keith Cieplicki said, “Your care for our neighbors in the Justice Center is a great act of kindness.”

Since March 2020, Cieplicki’s faithful band has not been allowed inside the Onondaga County Justice Center or the Jamesville Correctional Facility due to the coronavirus pandemic. So now he has 87 volunteers who write to 366 inmates, and he is looking for more writers.

“He’s got a small army and they do a lot,” said Kathaleen Blanding, a Cathedral of the Immaculate Conception parishioner who writes birthday cards to the incarcerated.

Asked if his project is an outlet for empathy or for creative composition, Cieplicki said, “I can’t help but keep thinking if it were me in there I would not want to be forgotten. So I guess I write out of empathy because no one should be forgotten.”

“Some folks like to draw,” he said, “they might draw something and send it. The beauty of Jail Ministry, we always like to say, is we’re always changing. We’re always adapting to what the needs of the folks are in the Justice Center, so that’s kind of the fun part. … It’s really turned into kind of something really special for us.”

He said a lot of people in jail “just don’t have anybody. And so we may be the only human connection they have, so in that way too, it just provides encouragement” for folks who “may have burnt a lot of bridges, and it’s nice that we can offer them someone who’s not going to judge them, who’s going to connect with them and support ’em.”

Jail Ministry, which was founded 45 years ago as a spiritual social-justice community, also does an annual Christmas gift bag for everyone at the Justice Center; this year the ministry added what Cieplicki called a “surprise and treat”: an Easter gift bag with pens, paper, envelopes, puzzles, snacks, hot chocolate, ramen noodles, and socks.

The volunteer letter-writers use either their first name or a pen name, and they send the letters to Cieplicki, who manages the letters going back and forth and keeps track of birthdays.

Blanding, who buys birthday cards and adds her own messages, read about Jail Ministry in a handout at the Cathedral. And she knew that there were “all kinds of people in jail that nobody visited. … I thought, well, maybe that’s where I can make a difference in somebody’s life,” she said.

Asked why she cares, she noted the Bible says to visit people in jail (Matthew 25:35-36) — “that’s one of the things you’re supposed to do in life.”

She writes “a little two-three sentences, and it really does make a difference in their life. … If you could see some of the letters that I’ve gotten back: that you’re the only birthday card I get, you’re the only one who thought of me on my birthday. It’s lonely, so it makes them know that there is somebody out there.”

‘God bless you all’

One of the inmates wrote her: “Sometimes you guys are all that we have as inmates. I don’t just speak for myself. I speak for a lot of people here when I say thank you for all the things you guys do at Jail Ministry. And that it does not go unnoticed. Sometimes it’s the little things that make the biggest differences in our days spent here. So from me and all that can’t reach out we thank you and God bless you all.” He signed off with “Your Pal from Jail.”

That letter “blew me away when I received it,” Blanding said.

One of the letter-writing volunteers is a student who is a parishioner at the Basilica of the Sacred Heart of Jesus in Syracuse. She explained in an email: “I don’t just write happy birthday. I put thought into it so every card is different. It helps me to be closer to God and it brings me the knowledge that I might have made somebody’s day.”

The mother of the student wrote: “I believe the Holy Spirit moved her into this ministry. When she was in the fourth grade, she wanted to do something for those in prison. She brought them Bibles, and received a letter from an inmate who was so grateful. She will always cherish this experience.”

Beth Schafer, the director of outreach at Holy Cross Church in DeWitt, writes to several inmates every two weeks. “After going and visiting with inmates, talking to them face to face,” she said, “it feels like we’re limited, we can only do that by letters now, but being able to look somebody in the eye and affirm their humanity, that makes all the difference.”

Asked how she guesses what the inmates need to hear, she said, “Well, you just don’t. Just reach out and say I’m here to pray for you and offer you any support that you might need and if you’d like to write back, that’s fine. And usually I think about fifty percent of the inmates write back. Sometimes I get a letter from an inmate that says, I just can’t believe you’re writing to me but I’m so grateful and I don’t know what to say. And so you know these letters are going to people that are appreciative.”

Schafer wrote to one inmate: “I am praying for you and your family. … I think that God is with us wherever we are, so I hope that you feel God’s love and comfort through these letters. Today the sun is shining and the trees are just starting to bud. May the encouragement of new beginnings give you energy and strength to get through another day.”

‘Out of the blue’

Schafer remembers sending perhaps three letters to an inmate with no response. “And then out of the blue,” she said, “he sent me a bundle of pictures of all his children and he said, Thank you so much for writing, I want you to know my family, and he sent all these pictures and I thought, Oh my gosh, he’s got all these babies at home and he wants me to know them, and I’m a complete stranger, so it was just a beautiful affirmation.”

One inmate wrote to her at Christmastime 2020: “I’m saddened to hear that the ministry will not be able to entertain us for the holiday. I remember as a child going into local nursing homes to sing carols. It made me feel so good to see them enjoying themselves and upset me when it was time to leave because I knew that there were individuals that would be spending their Christmas without the comforts of family and friends. I know that feeling now. My support group is not very large.

“Thank you in advance for your thoughts for all the inmates here at the jail. It’s great to have an organization that reaches out to those willing to accept it. May your holiday be merry and bright.”

“It’s very powerful for me to be able to know I’ve lifted someone up and made their day a little bit better,” Schafer said.

“We try to find ways that they can serve the community or the parish,” she said, “and during COVID obviously that was difficult, and we couldn’t go out and do our normal service work, so this is a great opportunity that came to me from Keith, and he helped me organize it with the kids to teach them about the Justice Center and about the way that we do the writing. …

“You have to put yourself in their shoes, and what kind of message might you want to hear from somebody? So the message that they try to write is that someone’s thinking of you, praying for you, you’re not forgotten, and … somebody out there loves you.”

If you are empathetic and enjoy writing, you can help people who are incarcerated in Onondaga County.

Keith Cieplicki, the director of Jail Ministry, is always looking for people to write letters to inmates.

“What I try to sell the people is that you’re doing something good,” Cieplicki said, “and there’s no wrong way to do it, and you can also kind of put your own personal touch on it. I really encourage people, Hey, if you like baseball, send in article with the newsletter about baseball, or ask the people you’re writing: What are they interested in? But try to make a connection.”

When you write, you “can either use your first name or you can kind of have a pen name, and all the letters have a return address of my name and Jail Ministry. So any individual in jail who wants to write back to their person, that letter comes to me first, and then I remail it to the individual, whatever their pen name may be. … We’ve learned through the years … how to do this in a safe and secure way but still a way that is personal.”

He said it’s about “stories, hopes, and dreams.”

A thankful inmate wrote back: “I want to extend my gratitude to your ministry. I cannot convey how it helped me. I felt very alone and abandoned by the ones who promised they would help me. You had given me a bag with paper, pens, envelopes, and a sheet of paper with 31 days of motivational sayings I guess you can call them. That little brown paper helped me every day and actually is still by my side now, day 15 today. I still have a few more to go. It helped me focus on something other than sitting in jail with no one and nothing. Again I am so very grateful as well for my new Bible and the” motivational sayings.

Here is your contact to join the letter-writing team: