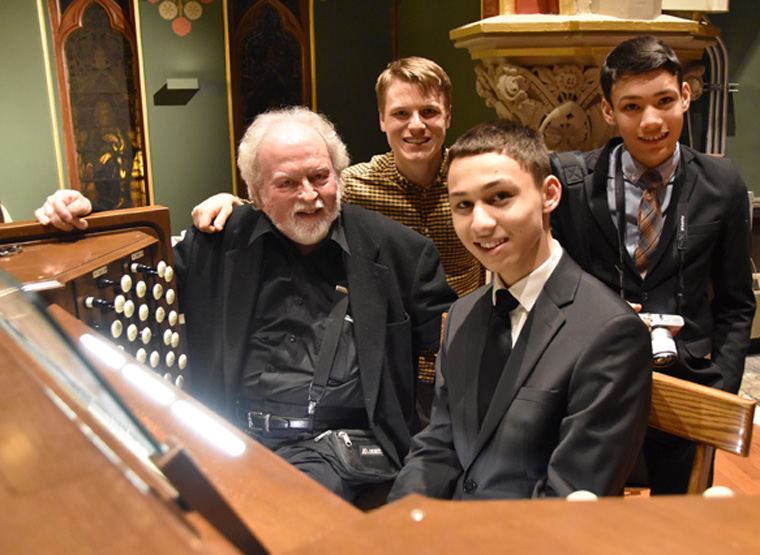 They took out the fireplace and subbed in a musical bonfire.

Dominic Fiacco, at age 14 already capable of combustible combinations on the pipe organ, on Easter Monday installed a 13-rank organ that forced the reorganization of his house.

“The whole living room is now pipe organ and piano and that’s it,” said Dominic’s father, William, adding that the “little guys” now play in the cellar. The family of nine lives in the village of Poland in the southwestern Adirondack foothills.

The donated organ, worth $120,000 to $150,000, is a new convenience but Dominic’s passion for music goes back years — he is a highly valued church organist and recital performer.

“It’s sort of nice being Catholic, and helping out in the Catholic Mass,” Dominic said.

On May 17, he earned multiple standing ovations for his recital on the Roosevelt-Schantz Organ at the Cathedral of the Immaculate Conception in Syracuse. He had held four practice sessions on that organ — hours and hours. But he said: “It goes by quickly.”

“It’s a privilege for all of us to delight in the great gift of this young man,” Msgr. Neal E. Quartier, rector of the cathedral, told the attendees.

Dominic called it an “ambitious program consisting of some pieces I’d never played before” in recitals.

He is willing to take risks. “I sort of have a driving side to my character almost,” he said. “Maybe it’s because I’m 12.5 percent Italian, but I really have a driving, almost ambitious, side to me.”

On Mother’s Day last year, he made his Big Apple debut in a concert at the Cathedral Church of Saint John the Divine. On May 9 this year, he gave a recital at West Point.

“Dominic is an absolutely incredible young man,” said his organ teacher, Stephen Best, minister of music at Utica’s First Presbyterian Church and lecturer in music at Hamilton College. “I have never thought I would come across a young person with this degree of talent. He is performing the way a seasoned pro would perform.”

Dominic began his Cathedral of the Immaculate Conception concert with the final movement of Louis Vierne’s Symphony No. 5 in A Minor, opus 47. He introduced it to the audience as “just very dramatic.”

“He had me hooked from the gentle rocking motion of the Vierne movement,” said Andrew Siuta, organist, liturgical coordinator, and music director at St. Joseph–St. Patrick Church in Utica, where Dominic is an assistant organist. Dominic holds the same title at the Parish Community of St. Leo & St. Ann in Holland Patent.

Next for the cathedral audience was Johann Sebastian Bach’s Trio Sonata No. 6 in G Major, BWV 530; 1. Vivace; 2. Lento; 3. Allegro. The Lento included stunning fluttering notes, and the Allegro opened dynamically and never really let up.

Dominic described the next piece, Joseph Bonnet’s Reverie, opus 5, no. 6, as “very soft and melodious.” The beginning suggests thoughts that spin cheerfully away. One attendee listened with her hand on her cheek; others looked up or down in an attitude of reflection.

“This type of piece echoes in your soul,” Siuta said. “That’s what counts at a concert more than virtuosity. Making that connection.”

The first part of the evening closed with Bach’s Prelude and Fugue in E flat Major, BWV 552. Dominic called it “epic.” It featured a lot of high-note majesty, and the audience stood and applauded.

The recital resumed with total fire: the final movement of Charles-Marie Widor’s Symphony No. 6 in G Minor, opus 42.

Then, Dominic fulfilled his promise of showing off the flute of the organ with Thomas Arne’s Flute Solo (transcribed by Ernest White).

“My favorite piece was the Duruflé,” Siuta said. “On the bus ride back from his West Point concert he asked what piece I might suggest for the cathedral. I emphatically endorsed the Fugue on the name of Alain. … He seemed to like the idea, and suggested he might learn the accompanying prelude, as well. He did excellently. Very mystical. Transcendent.”

Introducing contemporary Norwegian composer Mons Leidvin Takle’s Heart of Peace, Dominic noted that it might be the audience’s favorite piece; it certainly was popular at West Point.

“It’s a good piece to play right before the finale,” Siuta said. “Kind of like a high school graduation feel. Lots of emotions built up. … Monumental in a very quiet way.”

The finale was Max Reger’s tense, angry Fantasie on the name B-A-C-H. Dominic noted that with its crashing chords, it might work for Halloween. It made Siuta think of the actor Vincent Price dressed up as the devil. The piece tested Dominic’s speed and endurance.

“I especially like to hear Reger,” said Dominic’s father. He had waited a long time for his son to play it in concert. “I like the Widor piece,” he said, “of course I like Vierne, and the Duruflé piece was very fine. So overall I really liked the program. But the finale was great.”

It won Dominic a standing ovation, and he responded with an encore that he played from memory — Toccata in C, composed in 2018 by Carson Cooman. “I didn’t get a look at the score before I played it, so there might be a couple of things that are different from the score,” Dominic said.

Asked how he rated his performance, he said: “Well, I did make a few mistakes. … Ten is the very best, and one is the worst, and on that scale I would rate myself maybe 8.5 tonight.”

“For the first time in Dominic’s career, and perhaps for the first time at any organ concert I attended, I experienced a range of sonorities and emotions that I only get from a full symphony orchestra.

“I can now honestly see why the organ has been called ‘The King of Instruments.’ Experiencing all this in our beautiful cathedral, at the heart of our faith, in the midst of a mesmerized audience just heightened the glory of the music. It seemed to me that he was preaching from the organ bench — maybe more effectively than most homilists.”

“I keep saying, ‘How can this be?’” said organ teacher Best. “He’s a delight to work with, he’s a delight to listen to. I can’t say enough good, and I can’t be enough amazed. It’s unbelievable.”

“Very mature playing,” said Alan Lynch, director of the music ministry at the Cathedral of the Immaculate Conception. “He’s way beyond in years and his capabilities, and I look forward to what’s to come. Limitless technique.”

Kerner & Merchant Pipe Organ Builders, of East Syracuse, had recently rebuilt the Roosevelt-Schantz Organ. Company president Benjamin Merchant said Dominic is a “once-in-a-generation player. So I think that this was a massive blockbuster program full of youthful exuberance.”

He added that Dominic still has things to learn, but “he’s really a remarkable player.”

Father Christopher R. Seibt, who is wrapping up his studies in canon law at Theological College in Washington, D.C., used to be a parish organist and now plays the organ just for fun. He said after Dominic’s concert:

“I think he plays very clearly, very crisply, beautifully — a lot of emotion into it.”

At the Basilica of the National Shrine of the Immaculate Conception in Washington, Father Seibt said, “they bring in organists from France” to play programs like the one Dominic played in Syracuse.

Dominic’s brother Philip, who had reviewed Dominic’s West Point concert for the Sun, said: “I thought it was a beautiful experience to listen to Dominic’s beautiful music in our beautiful cathedral. … Practicing always pays off.”

“If I really know a piece, then I don’t need to hold back,” Dominic said. “I can just play it.”

He practices nightly — except Sundays — on his home organ, which was donated by a woman who was moving from Massachusetts to Florida and wanted to downsize. “She is just as pleased as she can be that her organ is with Dominic,” Best said.

The organ has two rows of stops, one on each side of the keyboard. The connections are mechanical, not electrical, meaning each key must be pushed down fully to send the air through the pipe. It develops precision, Dominic and his father said.

Next up for Dominic was a recital in Barneveld in Oneida County.

His focus now is “to keep learning more pieces, to keep getting better at them.”

And something else that might be related to that driven part of his personality when it comes to the organ:

“Not being afraid of anything.”