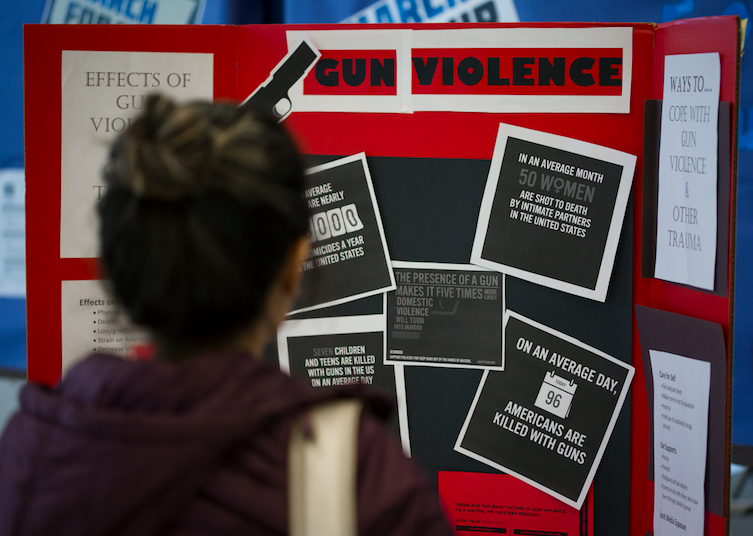 WASHINGTON (CNS) — In a standing-room-only lecture hall at Trinity Washington University March 23, a presenter asked for a show of hands for how many planned to attend the March for Our Lives the next day in Washington.

Most hands in the room went up and they also went up again for the next question: “How many know someone who died from gun violence?”

The hands weren’t raised quite as much for questions about how many in the room had done lobbying work, had written letters to the editor or called members of Congress about gun legislation. The presenters urged them to do so, that afternoon even, saying they should step up during this moment of heightened citizen activism.

“The march is great, but it doesn’t stop tomorrow; you have to keep marching,” said Vernon Scott, an assistant professor of criminal justice at Trinity Washington and moderator of a panel discussion on preventing gun violence — one of six presentations at the school’s teach-in on gun violence the day before the March for Our Lives.

Scott and the other panelists urged students to think about other things they could do to affect change with everything from voting, to addressing members of Congress or taking a stand on issues beyond just gun control.

One young woman in the audience said it’s hard to believe change can happen when you’ve seen so much firsthand. Her brother was shot and killed in 2004 and her husband was severely injured when he was shot two years ago. Her family won a lawsuit for her brother’s death, which wasn’t what they really wanted, and when her husband was shot, police questioned his lifestyle as if he had been to blame.

“I want to see a change,” she said after another woman in the audience said she saw someone get shot right in front of her. “Just like you’re in pain, I’m in pain too,” she said. “The reason we’re here”— talking about doing something to stop gun violence — “is because of your story. The more we push, the closer we’re going to get” to see things happen.

The overall sense from this panel was that change in gun laws and even treatment of mental illness was inevitable from the momentum that began with the Parkland, Florida, high school students who said, “Enough.” And history has shown that societal change, such as the civil rights movement, occurred because people stood up and fought for it.

“We’re at a tipping point,” said Sister Mary Johnson, a Sister of Notre Dame de Namur, and a professor of sociology and religious studies at Trinity.

She also urged students to be as involved as they could in this current moment addressing gun violence and said that no matter one’s religious beliefs, there is a role religion can play to bring about change.

This crisis demands moral language, she said, where people speak up and say: “To take the life of another person is evil and can’t be allowed anymore.”

The panel discussion did not offer easy answers nor did the presenters indicate that change would be around the corner.

“This is lifelong work,” said one of the speakers, a Trinity graduate who works with the Friends Committee on National Legislation.

At the end of the hourlong session, Pat McGuire, president of Trinity, gave a mini pep talk of sorts to the students telling them never to be afraid or intimidated to call members of Congress.

“Their power comes from us; they work for us,” she said, encouraging students to “speak the truth to that power.”