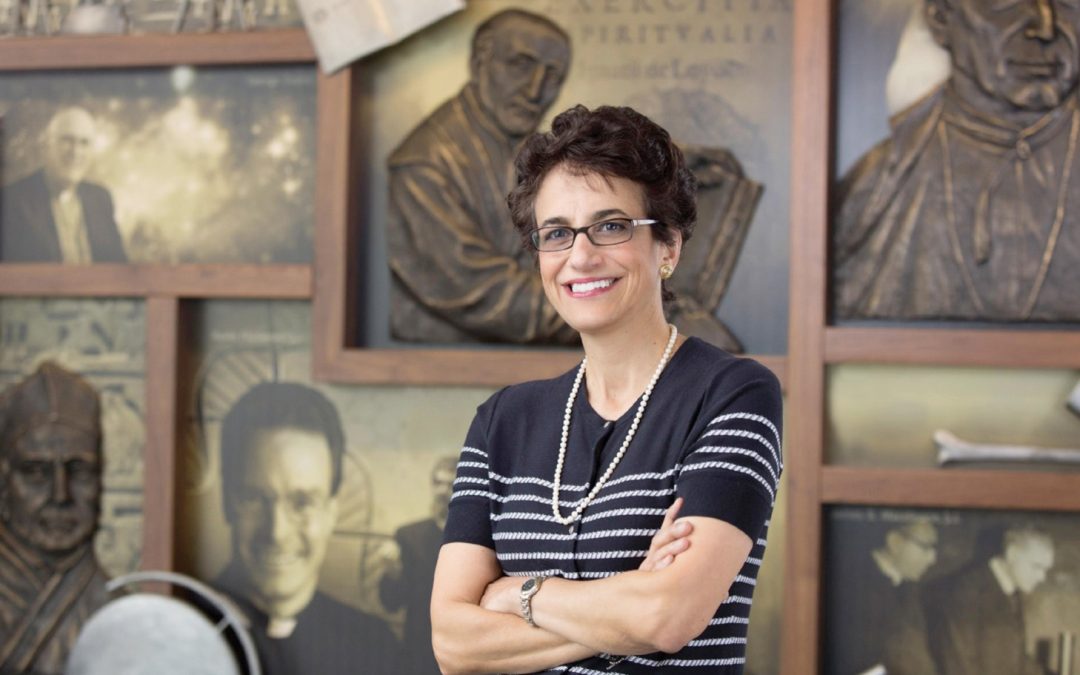 Le Moyne’s Board of Trustees recently approved a four-year extension for President Linda LeMura, extending her contract through June 30, 2026.

“I am very pleased that Dr. LeMura will lead Le Moyne College for many more years and will likely become the longest-serving president in the College’s history,” said Chair of the Board of Trustees Robert Reklaitis, ’75. “She has proven to be a transformational leader who

is beloved and respected by our students, faculty, alumni, and other constituencies. Through her leadership in national and international organizations, she has become a respected advocate for the Catholic and Jesuit educational mission. She has also become a pillar of the Central New York community by working with local leaders on programs to alleviate poverty, improve social and economic mobility, and create strong economic development programs. Linda embodies the College’s Jesuit mission, and the Trustees are unanimous that we have the right person to lead us.”

LeMura, the 14th president of the College, was appointed unanimously by the Board, effective July 1, 2014. A Syracuse native, she is the first female layperson to be named the president of a Jesuit institution of higher education in the United States. Prior to being appointed president, she served Le Moyne as provost and vice president for academic affairs from 2007 to 2014 and dean of the College of Arts and Sciences from 2003 to 2007. If she continues through 2026, she will eclipse the 11 years (1964 to 1975) served by the College’s fifth president, William L. Reilly, S.J.

Le Moyne has achieved extraordinary success under her leadership, including record-breaking enrollment and fundraising. Earlier this year, the College completed the $100 million Always Forward campaign, the largest in its 75-year history. She has overseen the enrollment of seven historically large, talented classes, and the Le Moyne endowment has grown to a record $250 million. Fully embedding diversity, equity, and inclusion in the College’s Jesuit mission, she has broken new ground by hiring a vice president for Mission Integration and Diversity, Equity and Inclusion. She also led Le Moyne through the COVID-19 pandemic without layoffs or salary or benefit reductions.

During LeMura’s tenure, the College received naming gifts for the Purcell School of Professional Studies and the McNeil Risk Management and Insurance Institute. New programs include the College’s first doctorate, an Ed.D. in Executive Leadership; and its second, a Doctor of Nursing Practice, to be launched in 2022. Master’s programs in Occupational Therapy and Family Nurse Practitioner have been added.

“My time on the Heights has been priceless,” LeMura said. “I am thankful for the support of the Board and our devoted alumni. I am inspired by our faculty of teacher-scholars, many of whom I hired as dean and provost. Their dedication to our students brings me joy. Our administrators and staff, including my partners on the College’s leadership team, are driven by the College’s Jesuit mission and work tirelessly on behalf of our students, parents, alumni, and friends. Most of all, I love our students. As a first-generation college student, as the daughter of immigrants, and as a beneficiary of a federal Pell grant, in so many ways, their stories are my story. We have much more to accomplish for them and for the generations who will follow.”