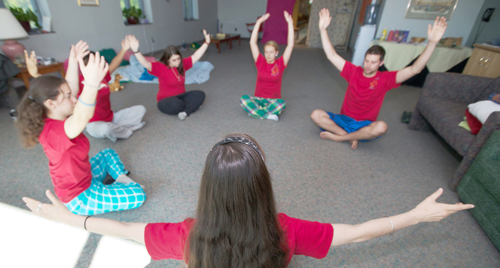 A newly-formed faith sharing community at Le Moyne College took part in a 24-hour fast and lock-in on April 23 to April 24 to help raise money for the Haiti Relief Fund and Cathedral Emergency Services.

“It’s just to spread awareness, and it’s kind of to give students an idea, even for a little while, of what it’s like to live every day being hungry,” said Maria Murphy, a freshman majoring in religious studies and a member of the group. “Although we’re fasting individually, we do it together as a community.”

The lock-in was at the Panasci Family Chapel on the campus, and the day included games, a procession through the campus, a bonfire, yoga and a Mass. The event ended when the group prepared and shared a meal together on Saturday at noon.

“This stretch of life, from the late teens to the early 20s, this is a time when young adults are really trying to figure out their faith and what they believe. They’re starting to examine the faith they were brought up in,” said Jay Verzosa, campus minister for faith formation at Le Moyne.

This is Verzosa’s second year at Le Moyne, and he said part of the reason he was hired was to get the faith sharing community started.

The group started with a retreat the first weekend of school, and the group has grown through word-of-mouth. Verzosa said it is mostly made up of freshmen, and that’s what he expected. “For something new to take hold it would be the freshmen who would really need to take it on.”

“The origin of the group is based on Christian life communities,” Verzosa said. “They were initially a part of the charism of the early Jesuits. Lately, in the past few years or so, these groups have really started to take root in quite a few colleges and universities.”

The group meets on Wednesday evenings for prayer and reflection. Verzosa said it’s an opportunity to center oneself but it’s also a chance to put one’s faith “in conversation” with one’s spiritual life.

The group has a structure that revolves around an adaptation of the 19th annotation of the Spiritual Exercises of St. Ignatius, which is a program of prayers, thought experiments and examinations of conscience. “One prayer that has anchored the group is the Ignatian daily examen,” he said. This type of prayer encourages reflection on the events of the day.

While the group focused on reflection and prayer in the first semester, during the second semester they transitioned into a focus on Ignatius’s model of the contemplative in action.

“That’s where the fast originated from,” Verzosa said.

“We started being more active because a lot of our discussions that we would have we were always saying we wanted to do more service, and finally we just said, let’s stop talking about it and let’s do something,” Maria said.

Part of this commitment to service led the group to volunteer at Cathedral Emergency Services, mainly hauling boxes and organizing the food.

One member of the group has siblings that were adopted from Haiti, so the students came up with the idea for a fast to raise funds to benefit both the victims of the January earthquake and Cathedral Emergency Services.

Verzosa said that at first he questioned a fast during the Easter season, but he said it was also a good opportunity to reflect on the different types of hunger, including spiritual or emotional hunger, as well as the many ways in which the faithful can be fed and feed others.

“It’s good to be mindful of it even in the midst of spring and the Easter season; there are plenty of people out there going without,” he said.

Yet as Maria coordinated the fundraising event focused on simplicity and asceticism, Le Moyne’s annual impromptu festival, Dolphy Day, raged outside. The irony was not lost on her.

“Personally, I wish I could let loose a little more and have fun instead of spending the entire day in my room trying to get everything done for the weekend,” she said.

She said she had noticed so much waste on the campus during the day, and it was difficult to place that against the group’s efforts to rely on less. “Everyone’s having a good time, I can appreciate that,” Maria said.

Still, she said she knew the efforts of the group would benefit those in need in the Syracuse community as well as those in Haiti.

For more information on the Faith Sharing Community at Le Moyne or to donate to the group’s fundraiser, contact campus ministry at (315) 445-4100.