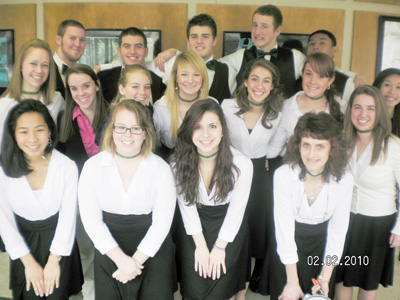 What initially began in the classroom as a motivator quickly grew into a team of 30 students who wanted to extend their praise and worship beyond the classroom. “It was fun starting out the class with one of the dances to get us energized, and now we have the opportunity to learn more dances and perform them for other students,” said junior participant Andrew Salamida. Although dancers range from freshmen to seniors, the students who make up Bodies of Christ share the sole purpose of ministering God’s word through dance and enhancing religious involvement while motivating students to learn. Also joining the team during some performances is the team’s mascot Paddy the Dog.

Chorogeographer and group leader, Miss Jane Conant commented, “The Dance Ministry Team has proven to be a new and unusual educational opportunity for the students.” Through music, dance, and the use of a tambourine, they  praise the Lord. As Psalm 150:4 states, “Praise him with timbrel and dance, praise him with strings and pipe.”

After the series of dances, the Dance Ministry Team interacts with the younger students by teaching them one of the dances that was performed. St. Joseph’s principal, Angela Tierno, remarked, “Through dance, these students manifest our Catholic Faith in well trained and beautifully synchronized movements. We are indeed fortunate to have such talented students in our midst.”

Bodies of Christ is available to perform for special events. If you are interested, please contact Miss Jane Conant at (607)723-5307.