Legacy of murdered Jesuits lives on after 25 years 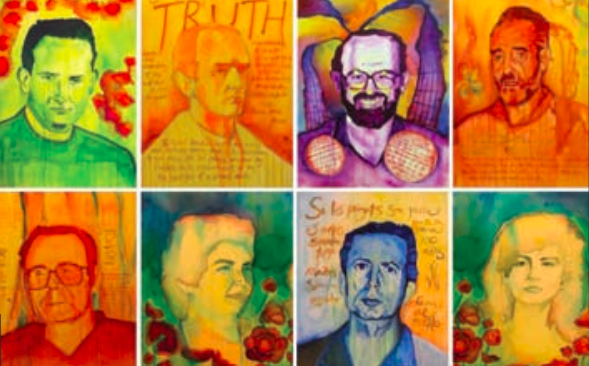 Six Jesuits, their housekeeper, and her daughter, all murdered in El Salvador in 1989, are depicted in portraits by Mary Pimmel-Freeman. (Courtesy Le Moyne College)

Father David McCallum was in his Le Moyne College dorm on Nov. 16, 1989, when he heard that six Jesuit priests, their housekeeper, and her daughter had been brutally murdered at El Salvador’s University of Central America.

“The news came early in the morning and spread across campus,” Father McCallum said. “The memory is very vivid.”

The eight — Jesuit Fathers Ignacio Ellacuría, Ignacio Martín-Baró, Segundo Montes, Juan Ramón Moreno, Joaquín López y López, and Amando López, their housekeeper Elba Ramos, and her daughter Celina Ramos — had been killed in the middle of the night, shot in the head by members of an elite, U.S.-trained military force. The Jesuits had angered El Salvador’s right-wing leaders and the military with their advocacy for human rights and social justice amid a civil war.

The university murders followed the March 24, 1980, assassination of Salvadoran Archbishop Oscar Romero and the Dec. 2, 1980, rape and murder of four American churchwomen ministering in El Salvador.

The brazen murders, and the idea that the U.S. had been complicit in the deaths, shook American Catholics and Jesuits worldwide, said Father McCallum, a 1990 Le Moyne College graduate who is now a Jesuit priest. He is executive assistant to the president for mission integration and development at Le Moyne.

“That event was in many ways a shocking kind of discovery by many in the church and many Jesuit educators that our educational values, our preferential option for the poor, our commitment to social justice, could be a matter of life and death,” Father McCallum said.

Le Moyne College sponsored an art exhibit, lectures, and a play to mark the 25th anniversary of the murders. A Mass Nov. 16 honored the Jesuits and women killed in 1989 and recalled the role of the late Father Charles Beirne, former Le Moyne president.

Father Beirne had said that the university’s efforts at social change had been under attack by El Salvador’s right wing, Le Moyne president Linda LeMura said during the memorial Mass.

Moira McCarty, a first-year religious studies major, was among seven Le Moyne students and two Jesuit volunteers who attended the Ignatian Family Teach-In for Justice in Washington, D.C. More than 1,500 people attended the Nov. 15 to Nov. 17 event, which focused on the 25th anniversary of the murders in El Salvador.

McCarty knew little about the incident before the anniversary events. She’s impressed with the Jesuits’ commitment to the people of El Salvador.

“They had the opportunity to get out of there and be placed somewhere else, but they decided to stay,” McCarty said. “It showed the solidarity they had with the people of El Salvador, and it took a lot of courage to stand up and say, ‘Hey, that’s not right.’”

That concept was becoming clear to Father McCallum, who, as a senior at Le Moyne at the time of the murders, was discerning a call to ministry. The issues surrounding the death of the Jesuits strongly influenced his decision to join the order, he said.

The concerns of the Jesuits in El Salvador remain relevant for people of faith, Father McCallum said.

“The language of the preferential option for the poor has been around since the 1970s,” he said. “This event galvanized a deeper level of commitment and in a way that was more cognizant of the dangers in a society when free-market dynamics don’t have any regard for this growing gap between the rich and poor.”