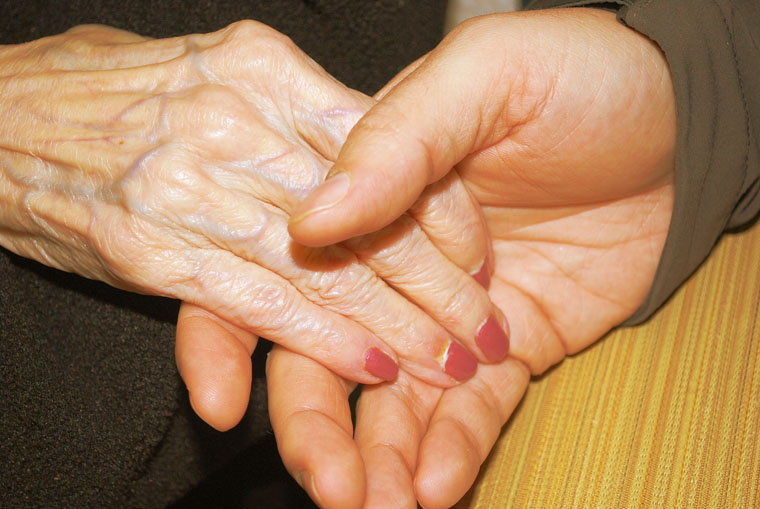 Not a hospital nor a nursing home nor a hospice agency, Francis House is something different: Inside the tidy houses on Syracuse’s North side, Francis House is truly a home, an extended family, a place where those living their last days on earth are given tender care and the unconditional love of God.

As Francis House prepares to mark its 25th anniversary next week, the organization is reflecting fondly on its past and moving confidently ahead into the future.

Francis House began with Sister Kathleen Osbelt, a Sister of St. Francis of the Neumann Communities. In the 1980s, as a volunteer with a local AIDS task force and as a chaplain at St. Joseph’s Hospital, Sister Kathleen knew terminally ill people were dying in hospitals for lack of nursing home placement or anywhere else to go.

“I began to ask other agencies if anyone was in the position to open a real home, a home where people could go to die. No one was able to respond to that need,” she said. She took it to her congregation. “The general minister of the Sisters of St. Francis said that the sisters will back that effort if I wanted to go forward with it.”

“Project Home” started to take shape. The congregation provided a house near the motherhouse, on Michaels Avenue, and volunteers helped to refurbish the space. On January 28, 1991, Francis House opened its doors to its first two residents.

A different kind of care

Since then, Francis House has served as the final home for more than 2,900 individuals, according to Director of Development Beth Lynn Hoey. Residents who come to Francis House have a progressing terminal illness and a prognosis of six months or less to live. The home admits about 12 residents per month, according to Executive Director Nancy Light. Some may stay for months or mere hours, but most residents are with Francis House for 20 to 25 days, she said.

The cost of care to Francis House is $7,000 per resident per month. Admission is based on need. There is a sliding scale for contributions toward the cost of care; many residents can only contribute a small amount or nothing at all, Hoey noted, and inability to pay toward cost of care is never a consideration.

Francis House is a private home, not a licensed medical facility. Francis House’s team of staff caregivers provides 24-hour care and comfort, just as a family member might. Each resident’s medical care is managed by a licensed provider, such as Hospice of CNY or a home health care agency, which delivers those services in the resident’s home, Francis House.

In addition to staff, Francis House has a fleet of more than 400 volunteers. Over more than a dozen shifts a day, volunteers visit with residents, clean, cook, answer phones and tend the grounds. Many have volunteered for years and many have had family members reside at Francis House.

Longtime volunteer Janice McCarthy spends Wednesday mornings making breakfast for the residents. A former public health nurse, McCarthy acknowledges that it is sad when residents die, especially when you’ve grown close to them. However, “once you have gone and been at Francis House for just a couple of times, you find it’s not a sad place but a wonderful place where you learn that you have gifts you never realized you had,” she said. “It’s a comforting place. When people say, ‘I just could never do that,’ I tell them, ‘You should just come and take a tour because you’d be surprised at what you can do and who you are and how you can give to these people and to the house.’”

Expansions and new construction over the years have brought Francis House’s footprint to two houses and its capacity to 16 residents. The resident rooms are private, complete with big windows and homemade quilts. Family may visit at any time. Outside the bedrooms, there are community great rooms, bustling kitchens, spaces for prayer and solitude. Porches and a well-tended yard beckon in the warmer months. Homecooked meals are served up every day, and treats are never far out of reach. The atmosphere is warm and homey.

“You walk in and you really feel like you’re surrounded by angels,” said Natalie Lattanzio, whose grandmother, Pat Brigandi, was a resident at Francis House. “It’s not a sad place. It’s a place full of love and comfort.”

At the quarter-century mark, Sister Kathleen said she is grateful — to the community of greater Syracuse, to the staff and the volunteers, to all those who helped begin and sustain the ministry of Francis House. “That’s my response — overwhelming gratitude [for] what can happen when a community comes together,” she said.

As to what the next 25 years may hold? Only God knows for sure, but Sister Kathleen said she sees the need for Francis House only increasing as populations age and family members move away or are not able to take care of dying relatives.

Light also underlined the organization’s focus on education and mentoring over thoughts of expansion. With 25 years of knowledge and experience “we have a unique ability to help people who are caregivers, wherever that care is being provided, to give the kind of care that’s given here at Francis House,” she said. “I do think we have a responsibility — and I know Sister Kathleen feels that way and our board feels that way — to pay it forward in the truest sense,” she said.

Francis House will mark its 25th anniversary with a Mass on January 26 at Holy Cross Church in DeWitt at 7 p.m. The organization will also present “Living the Final Chapter: A Symposium for Compassionate Care for Persons at the End of Life” March 10 at Le Moyne College in Syracuse from 7:15 a.m. to 4 p.m. Sessions will explore planning, spiritual care and various hospice models. Those involved in providing end of life care are encouraged to attend. Continuing education credits and scholarships are available. For more information on the symposium, Francis House’s care, or how you can help support the organization, visit
www.francishouseny.org.