Couples celebrate their vocation of marriage 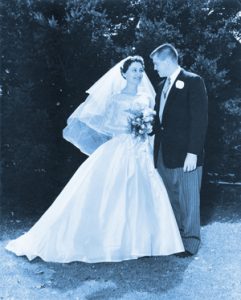 longevity of her almost 55-year marriage, “I don’t know really. We just get along and we live day to day,” she said. Ruth and her husband Harry were a little busy raising seven children along the way and now their 14 grandchildren keep them just as busy as ever. The Lewises are one of the more than 60 couples who will celebrate 50 or more years of marriage with their parish, St. James in Johnson City. The church community will offer Mass at 2 p.m. on Valentine’s Day, on a Sunday this year, and afterward a reception that will mirror a true wedding reception complete with music, food stations and a wedding cake.

St. James pastor, Father John Donovan, came up with the idea to honor and recognize vocations with special celebrations, “Spring of Vocations” this year.

Ruth and Harry Lewis have spent the majority of their lives in Johnson City. They love the community and Harry retired just last year after 18 years as mayor of Johnson City. He and Ruth met at a square dance where Harry was the caller.

“I was at the dance with my girlfriends and he asked me to dance,” Ruth said. “He was nice looking and I could tell he loved to dance.”

The couple has been dancing together ever since. Saturday night was their square dancing night, and friends sitting at the table with them would joke that the two talked all through their dancing. “Well,” Ruth said, “it was one of the few chances we had to talk to each other.”

“You have to spend time together talking,” Kathy said. In fact, she said, married partners tend to keep the focus on their children, feeding an obsessive need to be a perfect parent and to raise perfect children. This, she said, puts the marriage on the back burner and the children become the glue that holds the marriage together. “Couples aren’t taking the time to mature together and then the children are gone and they’re lost,” Kathy said. “The best thing parents can do for their children is to build their relationship, their marriage.”

For Kathy and John, who have been married more than 50 years themselves, the qualities that attracted them to each other are still there, but they’re even better over time.

“He had a great sense of humor, he was very hard-working, paying his own way through school with scholarships at Le Moyne,” Kathy said. “There are so many qualities that unfold and blossom over the years and become richer and deeper as age graces us.”

“I thought she was an absolutely beautiful woman,” John said. “I still believe that now. I loved her optimism, her joy and sense of adventure.”

More than anything else, though, the couple said the presence of God in their lives and in their marriage is the most important element.

“We began going to daily Mass at Le Moyne when we were dating,” Kathy said. “The Eucharist, the sacrament of reconciliation continues to feed and nourish us. We have had pain, loss and sorrow. Then, of course, we’ve had joy and excitement, too.”

They both think that having their parish and the Catholic Church recognize their vocation is very important and meaningful.

“We had wonderful priests and sisters who nourished our marriage along the way,” John said.

The couple said priests and sisters have families and friends made up of married couples and that they have valuable insight into relationships. Kathy said she thinks the Theology of the Body program will help build stronger marriages within the church.

“I think as the priests began to study and understand the Theology of the Body they can call us to an even deeper meaning of our vocation of marriage,” Kathy said.

St. James Church may be starting a tradition this year with the Mass and celebration recognizing married couples. Kathy explained that they brought together a committee of around 10 married couples just a few months ago. The committee members decided they would prepare the food for the stations. Confirmation students will serve as wait staff and music will be presented by the parish music director, Jan DeAngelo. This might give other parishes an idea of ways to recognize the important contribution strong marriages make to the family, the parish, the greater community and ultimately, the world.

Joan Chambers said the foundation of her marriage is “our religion and our church.” Joan and her husband Paul have been married for 52 years. They practice some pointers they were given through Marriage Encounter several years ago.

“We’d write to each other,” Joan said. “We’d get together at 7 p.m. for a 15 minute talk and in a loving way, we’d talk about whatever was bothering us. Now we’re doing basically the same idea about twice a week.”

The couple enjoys many of the same activities and that also helped them share quality time together. They have five sons and Joan said there was always the rule that at 5:30 p.m. everyone was sitting at the dinner table — always. She said building a strong marriage and family takes a lot of work but once a commitment is made to it, the resolve makes it easier.

Nancy and Earl DaRin, parishioners of Holy Cross Church in DeWitt, agree that  faith has been a key element in their 29-year marriage. Nancy explained that they both went through a sort of “awakening” a number of years ago.

“We both were saying there’s got to be more,” Nancy said. They made what Nancy called a “major shift” in their family life focusing more on their children and each other and less on financial matters. “We took a leap of faith and we made it through,” she said. 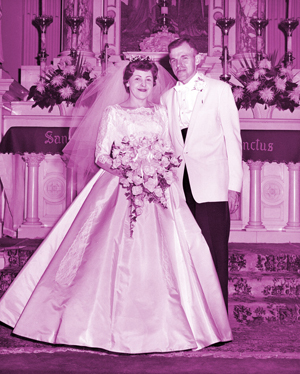 Belief in and commitment to each other are two things Ralph and Angela Worlock, parishioners of St. Peter’s Church in Rome, have been taking seriously for 61 years. Ralph said the secret to their long-lasting marriage is “loving each other and doing everything we can for each other.”

His wife agreed and said they always made it a priority to attend church together with their three children. Their daughter is a sister with the Parish Visitors of Mary Immaculate.

There is also something to be said for the ability to laugh together and enjoy all the situations couples find themselves in.

“She called me a stinker right from the beginning,” Ralph said. “And I think she still does.”